The weather today was perfect, one the clearest I’ve ever had in the hills and the 360 degrees
panoramic views were stunning. These three Munros were relatively easy as after the first
climb to Carn Liath, 1006m, most of the walk was easy going.

We had pushed quite quickly to the first summit and were closely followed by two ladies who
matched our pace...these girls were fit, turns out they weren’t far off completing the Munros
for the second time

We had some good banter then split up eventually meeting again on Creag Meagaidh then
followed different routes off the summit.
If you find this report Valerie and friend I’ll pass on some photos if you like? The views were good from the off but as we approached the second Munro, Stob Poite a’Choire Adaire,
1053m, the view across to Coire Ardair and Creag Meagaidh and down into the lochan were amazing
so we stopped here for lunch enjoying the scenery. The walk down to the window was easy thanks to the snow and after a short climb we
were walking along the plateaux to our final summit on Creag Meagaidh, 1130m. 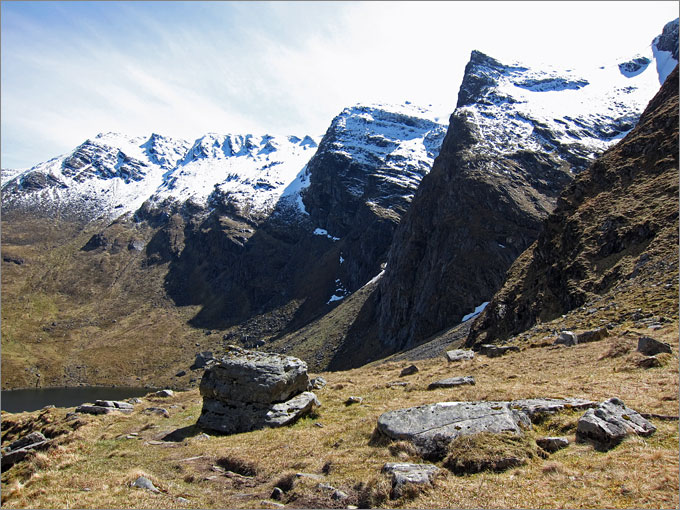 After our descent from the window we were taking photos and stopped for another bite to eat
when we noticed two skiers (maybe snowboarders) descending an impossibly steep looking gully.
They had come to what looked like an impassible drop where the snow had parted.

(You can just see them in the photo) We watched for about fifteen minutes and the were no further on. They showed no signs of needing
help and were moving around constantly, obviously searching for a route, so I hope they got down safely.
It would be interesting to hear their story if anybody knows who they were? A long, pleasant, easy walk back to the car to end yet another great day on the hills.

Great report & pics. Must do this soon

Yet another great read supplemented by some excellent pictures

Looks like these will have to be put on the list for this summer. Cheers for posting..

Hats of to those skiers! Certainly braver than the average bear.

Superb! Thanks for reminding me of Creag Meagaidh, I loved the circuit when I did it (summer time), have to visit it again in winter conditions

Lots & lots of snow on the hills, especially the eastern side of Highlands. We were on Monadhliath plateau on Saturday and almost swam in the white stuff

Nice one! Judging from the looks of things, your skiers had a lot less snow to work with in that gully than the ones I saw had . . . http://www.walkhighlands.co.uk/Forum/viewtopic.php?f=9&t=10345

A Quality report davgil the picture's are stunning...and its a timly report because i am going up there on thursday cheers.

Superb Dave. I saw nothing on this round so good to see the views.

A cracking report supported by some fine images

Just bet you were rubbing your hands in glee, go on - admit it

Similar conditions on my visit, a little less sunny. Found plenty of snow holes in the bowl behind the window, spent ages beside the lochan for refreshment just in awe at the surroundings

Stretch wrote:Nice one! Judging from the looks of things, your skiers had a lot less snow to work with in that gully than the ones I saw had . . . http://www.walkhighlands.co.uk/Forum/viewtopic.php?f=9&t=10345

Stretch - I hadn't seen that report of yours, at least your guys were skiing, mine were just edging their way down...madness

Must have been snowboarders, I reckon.

Defo a walk to do when the skies are clear.