A fantastic sunny day on the hills, great visibility and views, dry underfoot, another Munro explored - what could be better? Even The Bruce was happy to be in the hills (not always the case as he's not a Munro obsessive like me, and only really likes going out when dry weather is guaranteed). We did this walk during a weekend away in Inveraray, we didn't expect sunshine but we certainly appreciated it, and there was no denying the lure of a new Munro around the corner.

As this was our first time up Beinn Bhuidhe we had planned to more or less follow the route as described on walkhighlands from Glen Fyne - but we ended up coming down to a different glen altogether at the end, Glen Shira. Explanations below.

our_route.gpx Open full screen  NB: Walkhighlands is not responsible for the accuracy of gpx files in users posts
Set off at about 9am, lambs frolicking and not a cloud in the sky. What a great feeling! 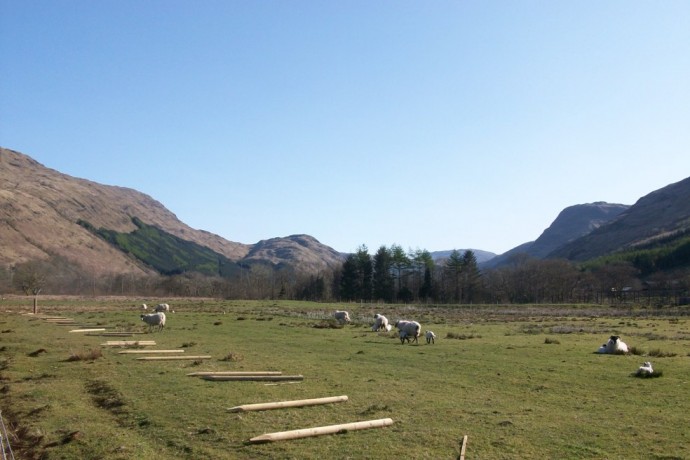 We should perhaps have taken the route on the other side of the River Fyne as described, since we got a bit lost in the gravel quarry workings - but we got a look at the stylish power station building anyway. A few cyclists passed us en route, and normally we would have been quite envious of their wheels but we were really enjoying the long walk in and the chance to take in the new leaves on the trees, see the first bluebells, hear our first cuckoo of 2012 and we had plenty of time. We got to Inverchorachan after a couple of hours and sat on the doorstep having a tea break in the sun. 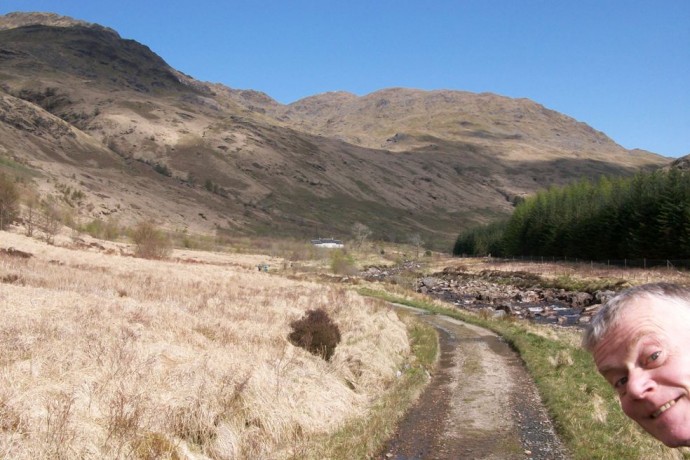 Then just past the cottage, we turned left at a gate and followed a lovely path as it wound its way up the burn, passing some great looking clear blue pools (which we didn't try out). We seemed to get above the waterfall at its source pretty quickly, it was a steep pull up but that means you gain height quickly. Then we got our view of the rocky sided summit ridge across a gently sloping grassy section. The path wasn't particularly squelchy - but I think we were pretty lucky, lots of muddy evidence. Up a very steep and eroded path to the summit ridge and the views were really opening out now on both sides - with a lot of snow on some of the mountains, and the odd patch for us too. 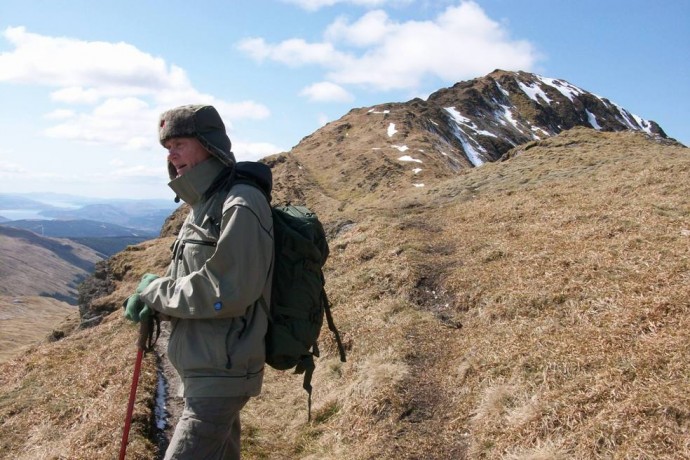 Nearly at the top - Loch Fyne below

The visibility from the summit was superb, my photos don't really do it justice. We could see the Paps of Jura, Mull, Cruachan and Loch Awe, Ben Nevis, Ben Lui, Crianlarich Munros, Ben Lomond, the Arrochar Alps ... and down Loch Fyne and even Inverkip power station. It was a long lunch! 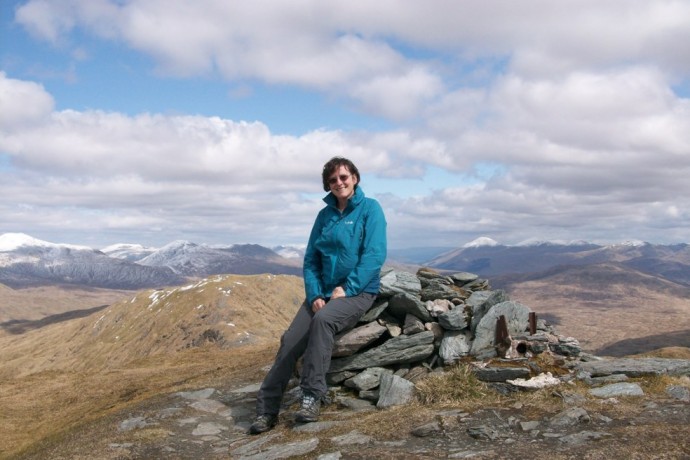 It was also quite busy on the top, nobody wanting to rush the inevitable "name that mountain" session. We were looking at the map, trying to work out another way off the mountain to avoid the eroded path we'd just come up, when we got chatting to a group of walkers who had come up the summit ridge from the south-west. Turned out they were a bunch of pals, originally from Eaglesham, and they had got permission from the estate to drive into Glen Shira. They very kindly offered to give us a lift back to our car in Glen Fyne if we wanted to go down that way too. Glen Shira was a new glen for us and it's always nice not to retrace your steps, so we gratefully took up their offer - thanks guys! This meant we kept our height for much longer, walking down a lovely, gentle grassy ridge till we hit the forestry. A great descent and easier on the knees than the other route. 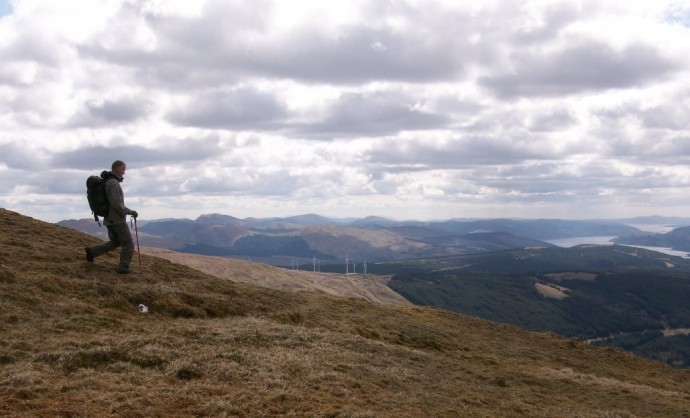 Walking down the south-west ridge

There was then a tedious and slightly muddy descent through a ride following powerlines into Glen Shira, and we met them at their cars by 4.00. Interesting glen, lots of timber operations and windfarm roads, and the ruins of Rob Roy's House in the distance. We were soon back at our Glen Fyne start point, waving off our friendly fellow walkers. Back to our hotel in Inveraray for a beer, shower and dinner.

Re: Beinn Bhuide and two glens

Bonus on the new route out!

Re: Beinn Bhuide and two glens

Yes, I forgot to say that it would be a great cycle into Glen Shira to start the walk, it's about 7 miles to a bridge by a disused quarry where the pylons come down. Heightwise, you're then at 300m but (from the back of the car) the road didn't seem toooo steep and the surface was good. Otherwise the route from Glen Fyne starts at sea level.