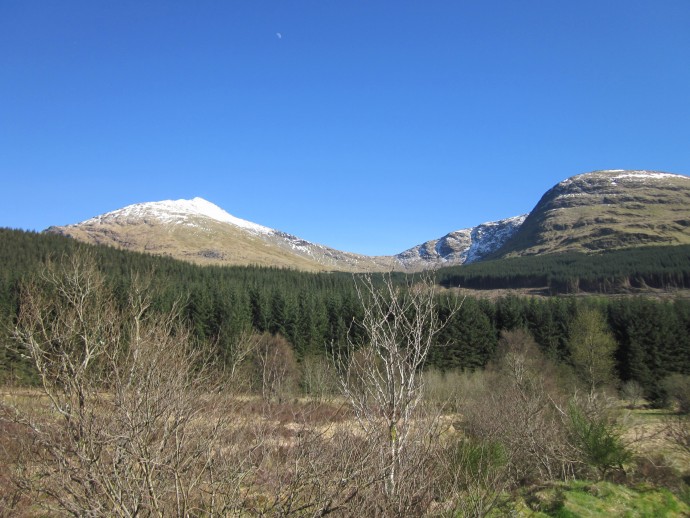 Walked this one with 7 other members of the club, the forecast was for clear skies and sunshine and we got both in abundance. We set of from the car park on the A85 just about 9,30 and headed along the bank of the river Lochay until we found a place to cross, not everyone found enough stepping stones to cross completely dry. The across the railway line and up through the trees, some parts very boggy and wet I would not like to see it on a wet day.
Once we were passed the trees and through the gate in the new deer fence we had a quick break before splitting into two groups. Iain, Garry and my self headed up into Coire Fionn towards the bealach between Ben Lui & Beinn a'Chleibh. There is a faint path that comes and goes a bit and more boggy ground but easier than the forest section. Once at the bealach we headed right towards Chleibh. After about 20 minuets we reached the very unassuming top, but the views all round were spectacular not least Ben Lui with its top covered in snow. Gary and Iain on top of Beinn a'Chleibh, Ben Cruachan behind.

We wasted no time due to the very cold wind and headed towards Lui and the rest of our part. We had a bite to eat near the bealach and headed up through the soft snow and rock a long haul up but fairly easy going. The top was looking good with the spindrift appearing every now and then making it look more spectacular. I reached the top behind Garry and we were able to spend time enjoying the views all round, the wind had dropped and the sun was warm. My best day on the hill’s for a while the views were truly amazing, the whole west of Scotland up as far as Ben Nevis was laid out before us with most of the higher hill wearing a white bonnet of snow. Stan, Garry and Brenda at the top of Lui.

Only one thing left to do head back for the cars. Later that night I realised that I should have been wearing sun cream silly mistake, I’m wearing a rather red face while I write this report.

Weather was tremendous for the last few days. Nice photos.