Last minute decision to put on running shoes, small backpack and go for it!!

Sunny early evening, too hot for a run, but now or never.

Ben Wyvis is the closest Munro to home (I think), and i was in training for run/cycle around loch ness, and hill runs suggested to improve endurance speed etc.

All i knew about hill running was - uphill one way, and downhill back!

Parked up in the usual car park, there were other cars so i assumed many on the hill - all of whom i'd pass with me going up , and them coming down. Although the weather was good, i was going up early evening, hoping to return within a few hours!!

The 1st stretch in the wooded area + over the burn is pretty flat, but i got up a reasonable sweat with the sun beating down. My 2 bottles of water may not be sufficient!

Out onto the bare land and the climb begins. There was a family enjoying a wee picnic by the stream + i took a mental note to take my brood up at some point. Soon i was ascending the main hill and could see An Caber on ahead. My running had reduced to a strained walk by the time the large steps had been reached. I did start counting to pass the time, but lost count around 600! All of which are knee height.

After a few false peaks i had reached An Caber and could see along the top towards the summit (but the descending mist meant that the actual summit was covered). I trudged on, managing to run again across the fairly flat top - surprisingly green - but not surprisingly quiet. I knew the distance to the summit but was soon engulfed in 'clag' seeing only 20m around - quite an eerie sensation this being a 1st M!

Eventually i reached the summit and took some photos to show of the view ( or lack of it ). I gave a cheer, and returned along to An Caber and into sunshine. On the descent i passed a 'proper' runner who was leaping up the large steps probably as fast as i was going down!

All in all a good hill to start with. Car park up to Wyvis 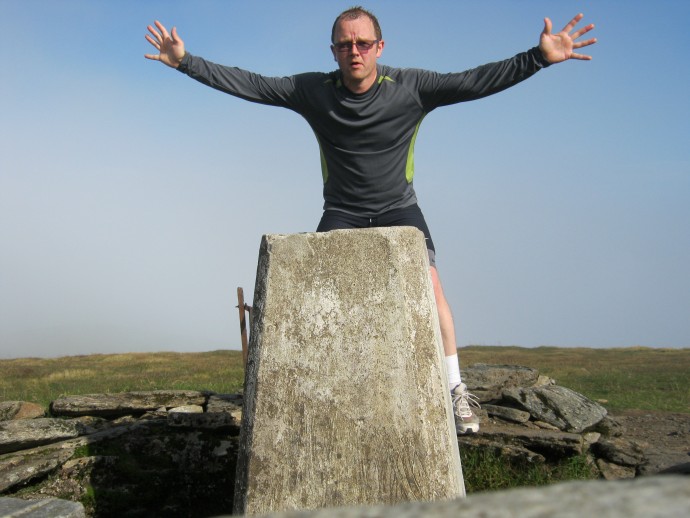 What an effort. It usually takes me that long to get to the top never mind up and down

Done this one in November, cracking sunshine to start and clagg to end, the usual for me

Recon Strathfarrar might be quite close to you to?? Could be worth a look?
Cracking picks and that time up and down . . . . . . . . you must be part mountain goat

Well done on 1st, is it a charity event your doing at Loch Ness

Tomsie wrote:Well done on 1st, is it a charity event your doing at Loch Ness

The loch ness monster challenge is part run part cycle - around the loch - sept 2011. Not on this year due to no sponsorship from First Group (usual sponsors).

I am planning west Highland Way early August including some Munros along the way - Lomond looks a popular one.

Brilliant I dont think many people run up their first Munro

Cant believe you ran up your first Munro....well done

I've also ran this a few times too.....the plateaux I find is torture and saps the energy just as much the climb

Mountainlove wrote:Brilliant I dont think many people run up their first Munro

It was more a fast walk up if i'm honest! Those steps are big ones!