our_route.gpx Open full screen  NB: Walkhighlands is not responsible for the accuracy of gpx files in users posts
Buzzzzzz. The alarm went off at 6:30am and we jumped up out of bed and looked outside the window to be greated by a foggy and grey Aberdeen. However, this wasn't going to dampen our spirits as we were heading out to Braemar for the first time this year and knew the forecast was going to be good. We had the Creag nan Gabhar circuit planned for our walk today. We did Loch Callater back in 2010 and looked up at the hills, dreaming of being able to climb them one day. Now that we have the confidence and fitness to go higher and longer, today was the day.

We set off at 8:15am and battled our way through really thick fog from just past Echt, all the way to Tarland. Not even the thickest of fogs could turn our smiles upside down as we knew we were in for a belter once we passed Ballater and the fog turned to blue skies.

Passing by Balmoral Castle, we waved to William and Kate (not that they could see us, and yes they were there as the Royal Standard was flying). Stopped at Braemar to buy some shortbread from the pharmacy (trust us, its really good!!) and eventually arrived at the Invercauld Estate carpark. We set off at 10am after letting a group of 4 men go first whilst we munched away on our recent purchase. The sun was beating down and we thought it wouldnt be too long until our fleeces were off. We put on our boots and off away we went.

We went through the gate and set off on Jock's Road, constantly turning around to admire Ben Avon and its surrounding hills in their late winter coat behind us. We wandered along slowly, listening to the birds singing and the water rushing past as we made our way along the track to our turn off point. It was time to take off our fleeces as the breeze had stopped and the sun made it's presence known. This is where you turn off.

This is the easiest climb we have done. The path zig-zags its way up the hill and before you know it, you are staring down the Glen from a considerable height. Ben Avon looked stunning in all of its glory. It is a hill we must climb one day. We reached the top of Sron Dubh very quickly and found a spot to have a breather overlooking Glen Clunie. The sun getting hotter and hotter, we could feel our skin starting to warm up. As we set off towards Sron nan Gabhar, we kept getting slight glimpses of Loch Callater. It wasn't until we reached the summit of Sron nan Gabhar that we saw our favourite loch in all of her glory, surrounded by snow covered hills and the waterfall flowing quite nicely on it's northern side. Feeling our skin starting to burn, we decided to pick up the pace a little and head to the summit of Creag nan Gabhar. The path was quite steep in some places and there was a little bit of snow still lying on the northern side. We reached a flat-ish part and found a small path heading to the summit that we followed. It took us to a large rocky area and we ended up turning 90 degrees to some grass which turned out to be the main path which wound it's way around the rocks and headed for the summit. Once there we took some photos at the summit and sat down on some rocks overlooking the A93 and some superb snow covered hills, which we assumed are the Ben Macdui range? Not bad for a lunch time view hey?

After lunch, we took some more photos and as we were getting ready to head down to Loch Callater, the 4 men from the car park appeared at the summit and sat down for lunch. We walked past, said hi and had a small chat before heading down a faint path towards the loch. The path took us to a really steep drop. Rick had no chance to suggest a new route around it, as Kamila started side stepping her way down it and carrying on away from the path we needed to be on, leaving Rick to follow quickly, trying not to fall, but ultimately losing the path once at the bottom after catching up to Kamila. 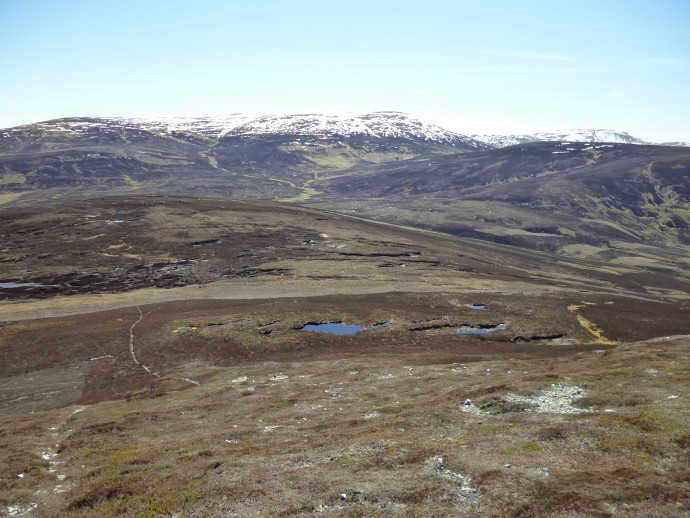 The path we should have taken (to the left) Phew, that was steep!! And we've lost the path

We headed towards a really boggy area and as we approached, we startled a Mountain Hare (one of many we saw in both summer and winter coats). He was a friendly fella though, and posed for a couple of photos before running off really fast, scaring a Pheasant, which scared the Hare, causing the Pheasant to fly away, and the Hare to run back towards us before panicking at seeing us again and doing a 180 degree turn and darting off, much to our amusement We stopped at the large boggy section and decided to head west and go around it, keeping the waterfall in sight the whole time. We made it around without too much of a detour and came over a ridge where we got a splendid view of Loch Callater. The walk report says that you need to find a path that heads to the bridge next to Loch Callater Lodge, or follow the 4x4 track to the water and cross there. We had a change of socks with us, but knowing where the bridge was, we found a stream and followed it along towards the Lodge. We contemplated jumping over the water a few times to get to the other side for the bridge, and just as we were about to, we spotted a footbridge and headed with ease to Loch Callater itself. Just as we got to the bridge, three US Airforce F15's appeared and we managed to get the camera out just in time to capture the 2nd (and closest) one before they disappeared. There were two other planes flying very high above them leaving contrails, so Rick assumed it was reconnaissance planes following them at height. After the excitment of the fly past, we admired Loch Callater and spent a few minutes relaxing at the bridge taking photos. We have only ever seen the loch on a damp, grey afternoon, so this was just perfect for us. As we started our walk back, we found it hard not to keep turning around to look at the view and wish that we owned Loch Callater Lodge so we could see this view all the time. 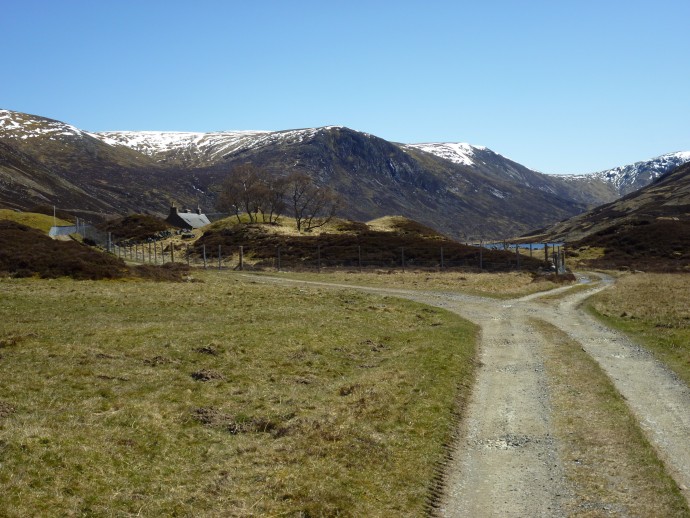 The walk back along the track was done quite quickly. By this stage our face and arms were burnt, so all that was left was for our necks to join the party, which they did!! Arriving back at the turn off point, we found the four men from the car park and summit sitting on rocks in the water, cooling off. We said hi again and carried on our merry way. Stopping to take more photos on this clear, sunny day. We got back to the car 4 hours after setting off. A short drive in the car and we were in Braemar for a drink and a visit to the duck pond at Morrone. It was busy, so we stayed a short while and then headed back to grey ol' Aberdeen, getting some unusual looks from shoppers at Banchory Tesco when we walked in sunburnt, wearing t-shirts, whilst they all wore cardigans and jackets on a grey, overcast day.

Two walks in three days that have totally exceeded our expectations. How lucky can we get!!