Up Gairich and down north side with two left boots!

Up Gairich and down north side with two left boots!

With MWIS predicting 90% cloud free tops for the west we decided this was the day for Gairich. The April monsoons we've had gave pause for thought as Gairich has a bit of a reputation as a hill of squelch (at least in its approach) but yesterday we felt it didn't deserve it's three star bog factor rating.

We parked in the space on left of road just west of the dam. As I booted up I heard a howl of despair from Kath.

Instead of putting a pair of boots in the car she had brought two left boots.

So what to do?

For a moment I thought that was us heading home but I'd underestimated this lady's determination.

Maybe she could do the hill in her trainers... but they were more gym shoes than trainers and wouldn't have offered any protection at all. Then she wondered if she could wear the two left boots and tried them on.

Could start a new trend maybe? By putting the larger boot on the wrong foot she said it was surprisingly comfortable. So we were in business.

Next obstacle to overcome was getting large enthusiastic labrador Charlie over the dam wall gate which is about 5 feet high. I climbed over first and used a piece of bread to encourage Charlie to stand on his back legs trying to reach the bread. Then Kath heaved him up, I grabbed his collar and he was over. We crossed the dam and were relieved to find the gate at the south end could be opened and closed - very civilised. Then on to the lochside path which did have some muddy sections but they were easily avoided and nothing compared to the first section of the path to Am Faochagach which was a Scottish version of the mangrove swamps. At this point it joins another path which goes through a gate but the way to Gairich turns right up a rough path beside the forestry fence and soon joins the stalkers path up from Glen Kingie. This path climbs Druim na Gaid Salaich in a series of zigzags for which in the heat of the sun I was grateful.

Above the zigzags the gradient eased and gave easier walking on the broad plateau of Bac Nam Foid. View of Glen Kingie and to the south west It was wall to wall sunshine and we had both omitted to bring sun screen which was daft.

So in damage limitation I kept my fleece on when I'd rather have had it off. Charlie kept his cool in time honoured labrador fashion wallowing in peaty pools. A white teeshirt proved not to be a good combination with a friendly, muddy mutt who was liable to shake in close proximity to the rest of his pack!

Gairich is a satisfying hill to climb with its steep rocky nose approaching the summit. The scramble isn't difficult but it's steep and I wondered how Charlie would cope with it and whether we'd have to coax him up with more bread. He was in the lead when we reached the foot of the rock face to be climbed. He stopped, had a look at it and then powered his way up, followed by the two of us. What a dog.

From there it's a short walk to the summit. 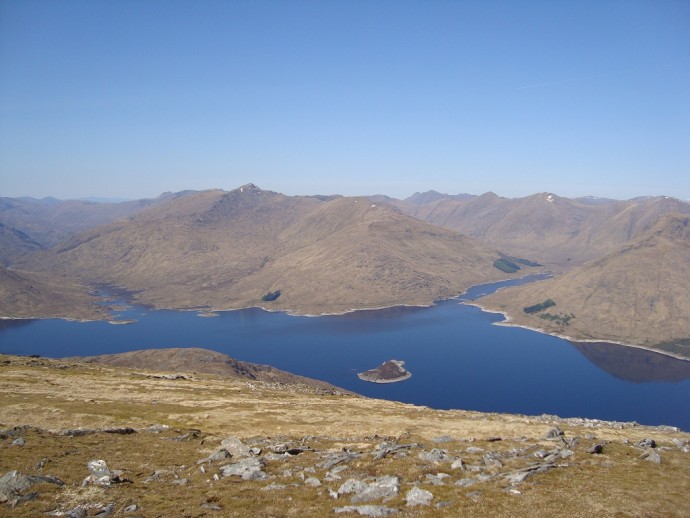 South to Ben Nevis and a glimpse of Loch Arkaig We continued on west past the cairn and found an idyllic lunch spot with stunning views all around.

Did someone mention food? Charlie had done so well getting up the scramble but we wondered how he'd manage going down. We knew an option was to descend the north side of the hill.

Kath and Charlie taking bearings for the descent The descent to the north was on steep grassy slopes which we zigzagged down.

Kath showing no sign of flagging in those two left boots! View back to the dam from north ridge There were crags to be avoided to the east So we traversed the slope below them Despite warnings to retain height as the going near the shore is boggy, I gravitated like a moth (or duck) to the water's edge. Charlie wasn't complaining and we had a wee game of fetch Glen Quoich was at one time home to Clan MacDonnell of Glengarry and was well populated. But the Clearances reduced the population dramatically. Then in 1962 it was partially flooded as part of a hydro-electric scheme to bring electricity to the Highlands. In the process the level of Loch Quoich was raised by 100 feet and Glen Quoich Lodge (where Sir Edward Landseer and King Edward VII had been guests) was submerged.

The loch waters were low and many stumps of trees were visible and bleached in the sun. There was something poignant about seeing these remnants of a community submerged in the interests of progress. But bringing electricity to the Highlands does seem a more worthwhile cause than replacing people with sheep. In my usual optimistic fashion I'd imagined walking along the stony shoreline would be easy. In places it was, but other parts felt like negotiating a boulder field of large angular rocks. So we headed inland but that wasn't all that easy either as there was a lot of upping and downing over humps and bumps and no path to follow. It was a longer route than retracing our steps would have been but it was definitely more dog-friendly and we enjoyed it - even if we did feel a bit disheartened to see how far away the dam still was!

View back to Sgurr a' Mhaoraich As we reached the end of the loch near to the outward path we heard a loud chirping which seemed to be coming from a sandy bank with holes in it. Kath wondered if there were sand martins nesting there and then we saw them. Apart from that and the plaintive mewing of a buzzard we didn't see any other wild life. Ironically we had to slow down for deer standing on the road near the first houses we came to on the way back to Invergarry. After all why be on the hills when there are richer pickings around where humans live?

And what about the two left boots? Kath must be one of the most uncomplaining people I know. At the end of the walk she said the foot in the wrong boot felt better than the one in the correct boot. There is quite simply no answer to that!

Aye, definately a mud bath in worse weather. My mate Doogz did it,and Sgurr a' Mhaoraich the day before you- with Anne and her two dogs. They enjoyed the experience as much as you and Kath

The picture's look amazing and for Kath to walk in two left boots had me laughing.

soulminer wrote:My mate Doogz did it,and Sgurr a' Mhaoraich the day before you- with Anne and her two dogs.

That was some day to do both - and fantastic photos!

quoman wrote:for Kath to walk in two left boots had me laughing.

She was a star - not one moan all day.

Reckons now she'll lose the nail off her big toe!

I love to see dogs out enjoying themselves on the hills, great weather with good photo's

Great report and stunning pictures! Had me laugh

The doggie must have smelled back in the car

Tomsie wrote:I love to see dogs out enjoying themselves on the hills

He enjoyed himself all right!

Lenore wrote:The doggie must have smelled back in the car

To be honest I smelled so bad myself I didn't notice the smell of the dog!

quoman wrote:for Kath to walk in two left boots had me laughing.

She was a star - not one moan all day.

Reckons now she'll lose the nail off her big toe!

I think most of the toenail will survive. I even managed two Strathfarrar Munros yesterday (in a pair of boots)

kath098 wrote:[I think most of the toenail will survive. I even managed two Strathfarrar Munros yesterday (in a pair of boots)

Well done on the Strathfarrars - which two?

kath098 wrote:[I think most of the toenail will survive. I even managed two Strathfarrar Munros yesterday (in a pair of boots)

Well done on the Strathfarrars - which two?

The two far-off ones (I forget their names).

Great report Kathleen and really funny about the 2 left boots

Lovely photos and another great day in the hills

kath098 wrote:The two far-off ones (I forget their names).

Here's the top of Sgurr a Choire Ghlais looking west Lovely photos and another great day in the hills

I couldn't believe how well Kath did wearing the wrong boot!