Did these on Tue in good weather, not a lot of effort & 4 Munros ticked off. Not really memorable, but good views of more interesting hills. Could be a problem navigating in poor visibility.

carn mairg.gpx Open full screen  NB: Walkhighlands is not responsible for the accuracy of gpx files in users posts
Got to car park just before 10am (left turn before phone box), there's space for about half a dozen cars depending on how sensibly people park, so prob best to get there early on weekends. Opposite the phone box there's a large metal gate & sign welcoming you to estate. The gate rests on its bolt so had to lift it up to open. Driving up the single track road and opening the gate are the trickiest parts of the day, now it's plain sailing.

Followed path, another couple of gates with stiles then out of the woods and path continues up side of wood: Over this, along the side of a burn for a while then head up towards Carn Gorm. Grassy ascent, not really steep: 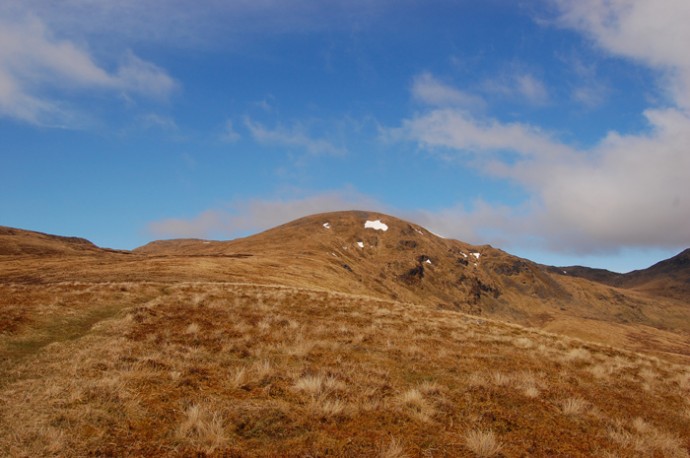 Cairn half way up with view of the descent from Creag Mhor: There's another cairn with a collapsed trig point, then route descends to Meall Garbh: Longest walk between Munros now, over to Carn Mairg. Met a couple coming the opposite way but most seemed to be heading clockwise: Only one stick on the next cairn: Descent, crags below so used GPS to follow WH route, there are alternatives though. Descent path down the ridge off Creag Mhor: Easy descent, at the bottom I joined the original path out of the woods then straight back to car park. Walk didn't take long, wasn't tricky so hard to imagine 4 Munros got bagged. Took a wrong turn out of car park so had an extra 20mins on single track, nice part of the country though.

Good time to get in 4 munro's

Well done gman. I'm heading for Glencoe tomorrow but I fancy these four after that.

Fudgie wrote:Well done gman. I'm heading for Glencoe tomorrow but I fancy these four after that.

It's an easy day, might be a wee bit boring after Glencoe though, thinking of heading to Mamores this week.

quoman wrote:Nice report gman did you have a look at the crags and drop at the end of Carn Mairg i just about walked of the end of it in the thick clag

Nice report gman. Thats a nice round of hills when the you can see where you are going