We had intended to climb Creise on this particular day, but having arrived in Glencoe found it to be white over and too dangerous to consider without Crampons. Instead we decided to make a short ascent of Buachaille Etive Beag, which we had previously climbed and knew to be pretty straight forward. Knowing that it would get icier and slippery nearer the summit we only intended just to gain some height to enable us to capture some snowy Glencoe images. The short walk was fantastic with the surroundings looking stunning in the snow against the blue sky, as the sun came out....……just beautiful!! As we climbed we came across 'running' deer tracks in the snow and we wondered whether they had been disturbed during our ascent. We stopped and looked in the direction of the tracks, up Lairig Eilde, to see a small herd, which stood out against the snowy background. Unfortunately they had made some ground before we could retrieve the camera from the bag so were some distance away, incredible to see them in such surroundings! 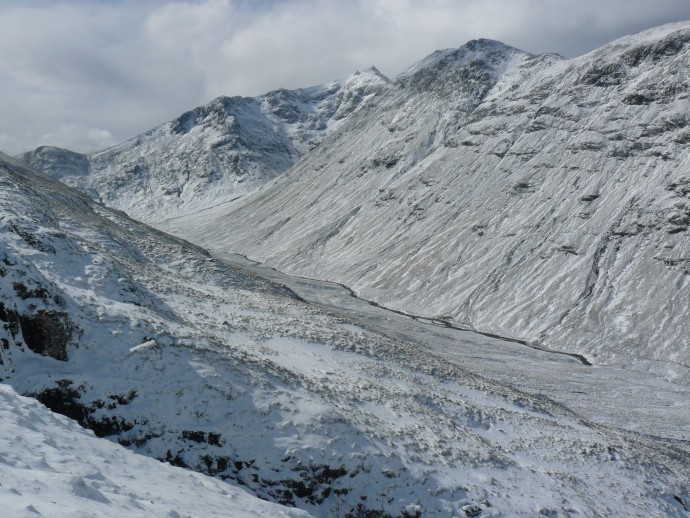 Deep drifts and ice made the crampon less climb quite difficult and the subsequent descent quite dangerous and so reluctantly we decided it was time to turn back: On the way back through Glencoe we stopped off at the study to capture the famous shot of The Three Sisters: Three Sisters from The Study (above the A82)

We did not return to Creise, saving it for another day so decided to tackle Stob Ban (Mamores) instead (see later walk report).