With the girl away on her weekend, including the mother-in-law and with the MWIS promising good weather Saturday was looking to be an excellent day!
This, what ever the next Munro was, was to be RosythAlly's 50th. Discussions after Carn a'Mhaim had talked of / led to the desire to Buachaille Etive Mor. What a weekend to do it! One quick phone call on Friday night finalised that the leaving time was to be 06:00, destination Glencoe, allowing us plenty of time to get there, conquer what lay in front of us and be back in time for the FA Cup Final.
With lunch pre-made and rucksack pre-packed I was off to bed at 21:30. On a Friday!

That's how I roll kids. The alarm painfully set for 05:00.
I'm assuming eager anticipation of the Big Buachaille had me awake before my alarm. It was just painful. Regardless, I was up and forcefully eating breakfast but was out the door at 06:00 as RosythAlly pulled up and we we were off. It had been a while since I was on this road and had actually how far the drive was. The skies mainly clear with a slight scattering of cloud - things were still looking good.
As we drove through Crianlarich the skies darkened and as we continued tiny white specs appeared rushing towards and bouncing on and over the bonnet and windscreen. The beginnings of snow!

This wasn't planned. As we made our way round the head of Loch Tulla looking over The Black Mount it was looking considerably black indeed.

Still, onwards we drove.
As we hit the summit of Rannoch Moor and started our descent into Glencoe, the Big Buachaille over-powers and intimidates. Jokingly I ask which of the climbing routes he fancies taking up. I stare out of the passeneger window staring at this beautiful, and iconic mountain of ours feeling a little anxious.
"We need to keep an eye ot for the carpark" I'm told, "it's just around here."
"There it is! In front of us" I respond while pointing through the windscreen as we're hurtling towards the corner where the carpark is located at Altnafeadh.
"No it's not" I'm assured as we still dont lose enough speed.
"It is! There's the path there leading up to the corrie" I exclaim.
"Very good," I'm told, "but that's not where we're going!"

Ah well, what can you do right?

With much of the confusion behind us we pull into the carpark on the left side of the road - opposite the bee-hive cairn. The car park to ourselves. It was only 08:00, and it was to be a glorious day, right? The clouds still hanging dark and heavy over us. It'll get brighter, and busier I am sure.

Deciding to keep all the kit I had packed in my bag we were booted and packed and on our way by 08:20. We follow the path and the route described exactly as detailed here - though almost make the wrong decision when we reach the fork in the path. "Don't think it matters" I say, "but we'll keep to the left anyway."
What a good call. This is the path leading towards the bealach. 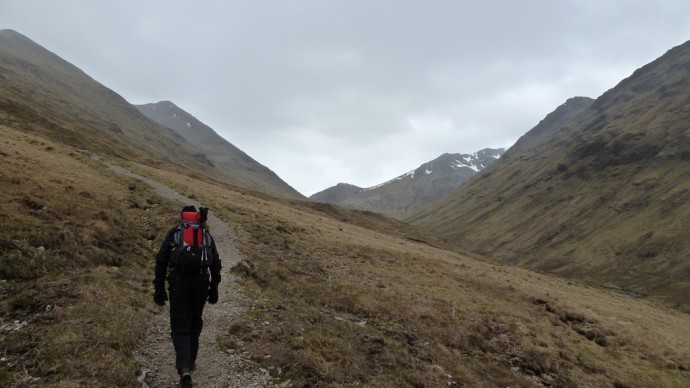 The path is well constructed gradually getting steeper. Some steps gaining you a height of 1-1.5ft, height is quickly gained. It wasn't long after we made the right choice that we looked back, fully expecting to see the Aonach Eagach. Instead we were met with a view of cloud dumping a whole load of something, and before we knew it it was on top of us. Snow! Not big flakes, or particularly heavy but enough to settle and give a light covering on the ground. The weather will be ok. Won't it?

As quickly as it came, it was gone. Looking back now we could see glimpses of bold blue sky. Onwards up the path we go. The incline levels off as you near the bealach, sights of large slab of rock tell you are there. The views over to the west side of the Big Bauchaille also tell you that you're there. We now had our first proper glimpse of the days first target - Stob Coire Raineach. (Hadn't seen it from the car after discussing we were climbing the wrong mountain! We made the decision to tick this one off first.

The path up is intially an eroded way on the lower grassy slopes and it soon fades out as the higher rocky outcrops are reached. This didn't bother us as we picked our way up - so long as you kept going up you knew you were going in the right direction.

Within 25mins from starting at the bealach the summit cairn was in sight, and with that I held back and allowed RosythAlly to go forth and claim his 50th. The views we were treated here were unbelievable! The cloud was hanging low between ourselves and The Ben, but Schiehallion was clearly visible over Rannoch Moor. And the west side of the Big Buachaille looked more impressive up here than what it did at the bealach. And to the east of us Stob Coire Sgreamhach with Bidean Nam Bian was looking magnificant also. To the south east, our second target of the day, Stob Dubh, looked interesting (I hadn't really reviewed anything of the Little Buachaille so this was definately new to me) and beyond lay Glen Etive. We were joined, momentarily, by a solo walker who arrived at the cairn from which we chatted briefly before he disappeared off towards the Bealach again. We lingered a little longer and took on some fuel and 5 mins later we were off again, this time we came off an initially steeper way from that we took up and in no time at all (10-15mins) we were back at the bealach to which we passed another solo-soul sat on one of the rock slabs. From here you're instantly climbing, quickly gaining height, to the ridge leading you to Stob Dubh. Once you hit the first top(?) at 902m then it is easy going along the ridge, descending marginally before climbing back up. As height is gained again, the ridge narrows to about 10-15ft across (I've never experienced a ridge before but having seen pictures of one of it's more famous neighbours - Anoach Eagach - I'd suggest this doesn't count as a true ridge, but who am I to say? Once up this last climb you reach the summit. A quick photo to celebrate RosythAlly's 51st, and my 33rd, we continued along the top to which the views down Glen Etive were fully open in front of us. At this point the camera was going like crazy. Views of glorious mountains all around, some more striking than others. After indulging in the views and fuelling up we made our way back along the path we had come, and upon descending just after the summit there was a small group of walkers, one of which didn't look particulalry well

Being in a group, and witnessing no obvious distress - not that there was much we could have done we continued onward retracing our steps.
The walk along the ridge certainly seemed to take longer than it did to get up, and the descent down the slopes didn't seems as steep as they were to climb. Within very little time we were nearing the bealach and took a split in the track that led us away from the bealach itself and rejoined the main path further down. The steep ascent of the stairs meant a steep descent. Thank God for walking poles to absorb much of the shock to the knees. Built stairs are great for ascent, and give a sometimes much needed cleaner going, but can be a killer on descent. But we shouldn't complain - back down and in the car park for 13:20. Not a bad effort

Not that we are ones for rushing, but as I said, there was the small matter of the FA Cup to get back for - watching as neutral of course.

But for a lesser neighbour, you cannot grumble at the views you can be treated too.