Derry Cairngorm with lots of Beans!

Derry Cairngorm with lots of Beans!

BeansDerry.gpx Open full screen  NB: Walkhighlands is not responsible for the accuracy of gpx files in users posts
loons on this walk: RTMcB, SMRussell (not so full of beans in the morning

Cycle in from Linn of Dee to Derry Lodge was great took about 20 mins, return to car was even better

. Locked the bikes up next to a fallen tree. There was a party of 4 blokes on bikes with 2 doggies plus a second biker. Also, there were 2 more bikes locked up behind a shed. When we returned, there was just one solitary bike.

Walk up the east side of Glen Derry was gorgeous. We missed the start of the ascent to Beinn Bhreac by about 100m but easy found it in the trees. Straight forward ascent to bealach at 689m. Made a slight navigational error by heading for west top instead of proper summit on the east. Decent sized cairn with great views to SE Lochnagar and SW to An Sgarsoch and Carn an Fhidhleir. Judging by the clouds, the northern Cairngorms had the best of the weather on Sunday - slight touches of light snow/hail for small periods of time, more refreshing than unwelcome

. Snow covering made things more interesting otherwise the slog through bog would have been quite tedious. SMRussell regained her beans for the ascent up B a'C. I stopped to make some yellow snow and only caught up with her at the summit. From our vantage point, we picked out a route to directly ascend Beinn Mheadhoin. We aimed for a section of heather between two banks of scree, this would get us into the snow line where the gradient looked as if it leveled off nicely. Crampons and microspikes were useful on the steep descent of B a'C until the snow ended. Then it was a case of picking out a safe descent down the really steep scree and heather

We crossed the Lairig an Laoigh by the kidney shaped lochan and ascended up the steep east side of BM. It was steep but easily doable. Though I wouldn't fancy descending by this route

. Once on the snow, the gradient leveled off and we safely made our way up to the ridge line of BM and onto its mighty Tors! A wee scramble and we truly bagged BM. SMRussell is much more agile than me, took me a bit of effort to get my leg up and over

. Awesome views. Descending SW we stopped off at the cairn at 1163m to get a great view into Loch Avon and the Saddle between Cairn Gorm and Bynack More. Sadly the photo of Loch Avon wasn't great, but the view of Loch Etchachan would more than make up for that. Again crampons and microspikes were donned for the descent from BM, however whilst they did help, they didn't give that much grip on the slushy snow. Somehow SMRussell's juice bottle came flying out of her rucksack and descended BM on its own. A skillful bum-slide with ice-axe self arrest soon reunited juice bottle with owner, that was cool to watch

The crossing of Loch Etchachan presented no problems and we were soon on the ascent of Derry Cairngorm. We had thought of re-bagging Ben Macdui as last time we were here we couldn't see a chuffing thing http://www.walkhighlands.co.uk/Forum/viewtopic.php?f=9&t=15864. However, as the weather looked like closing in we stuck with just rebagging DC. A snowy and bouldery ascent, seemed to take ages, but with great views of the Devils Point and Cairn Toul opening up we soon made it to the top. The descent of DC was just as we remembered it - long!

The brigde at Derry Lodge is always a welcome sight on the return. A yummy pineapple and apple pit stop before cycling back to car was just what I needed to fuel my legs for a swift bike ride. Driving home down the A93 we could see all the newly deposited snow by the Spittal of Glenshee and the deer were out everywhere 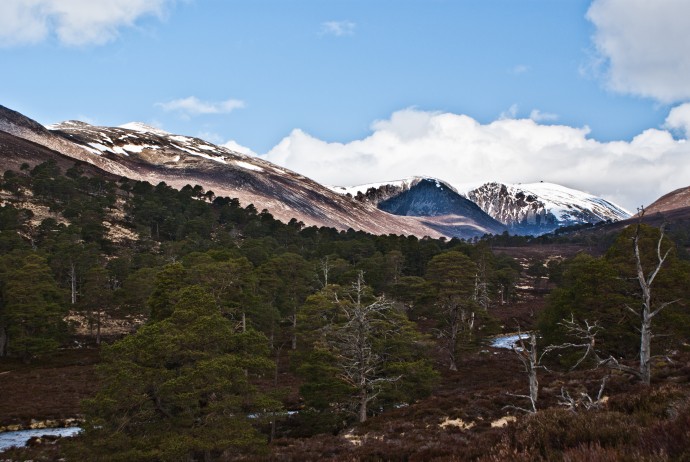 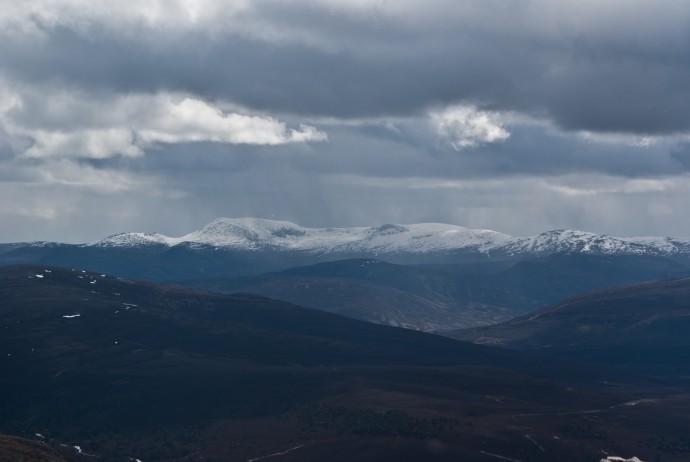 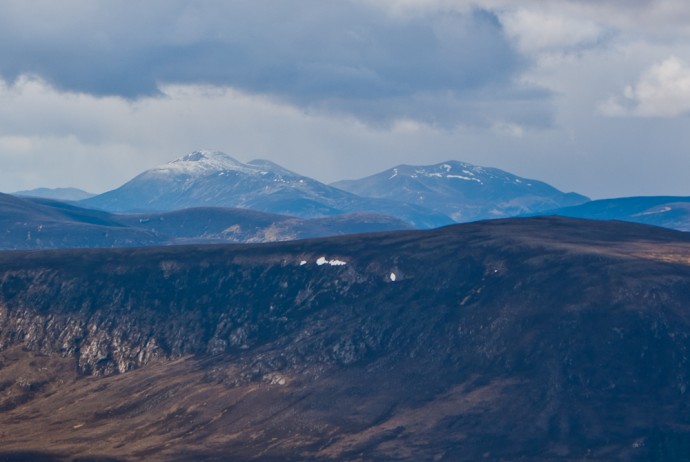 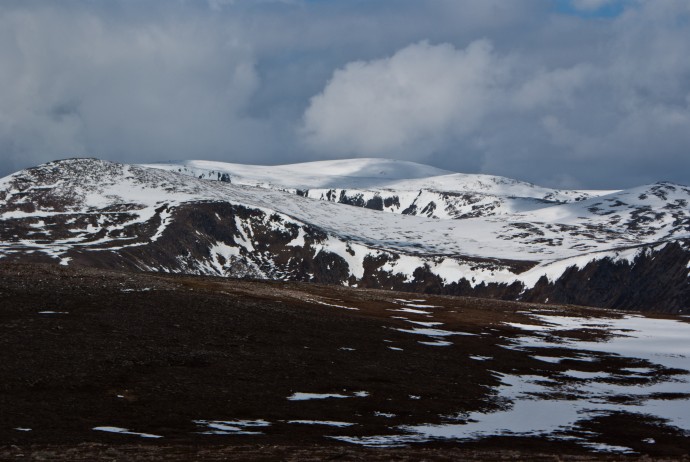 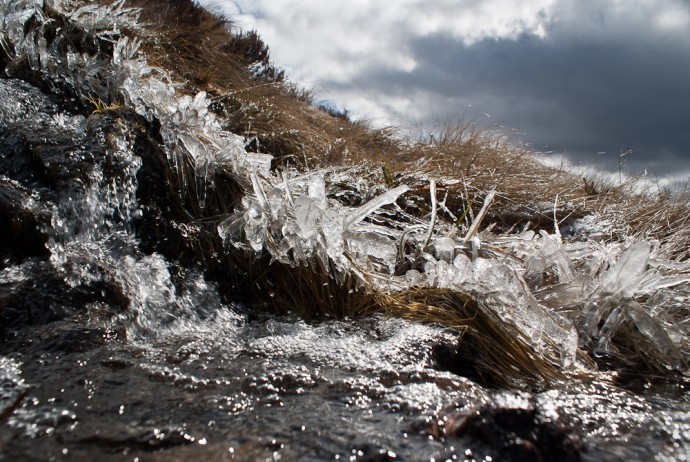 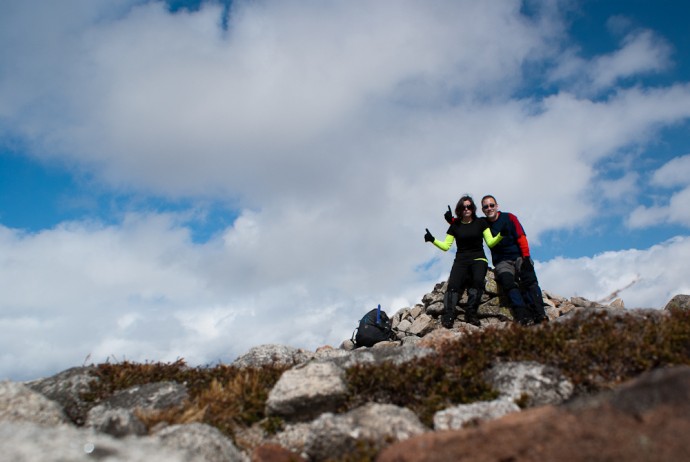 On top of Beinn Bhreac 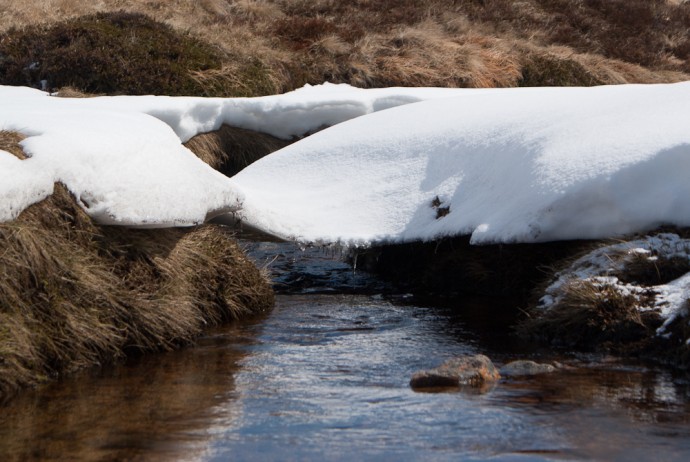 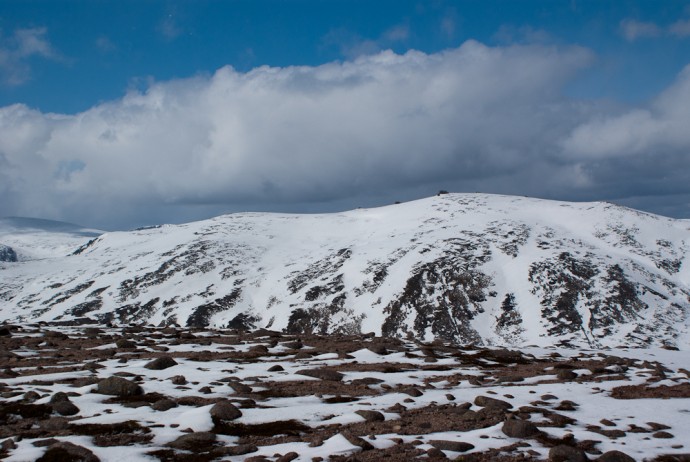 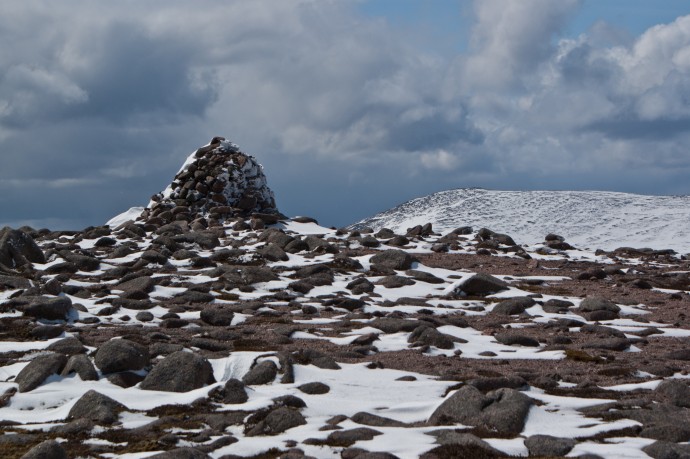 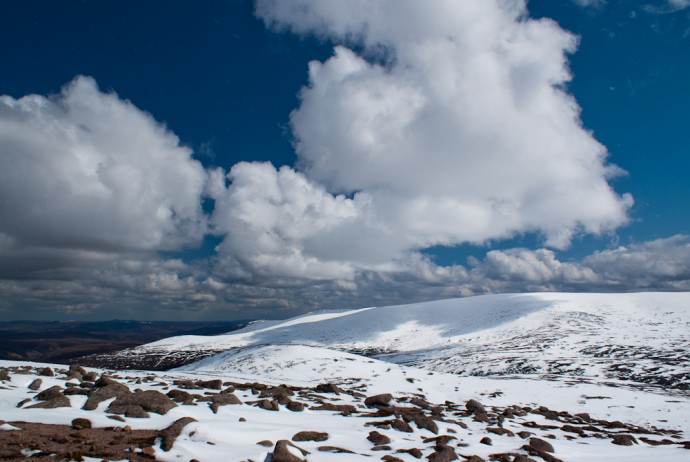 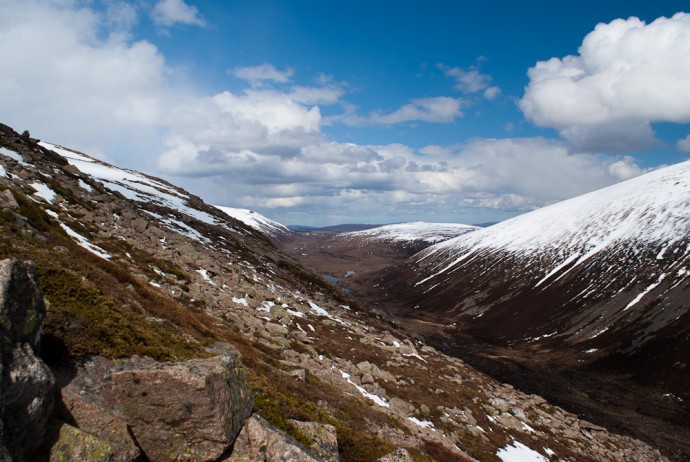 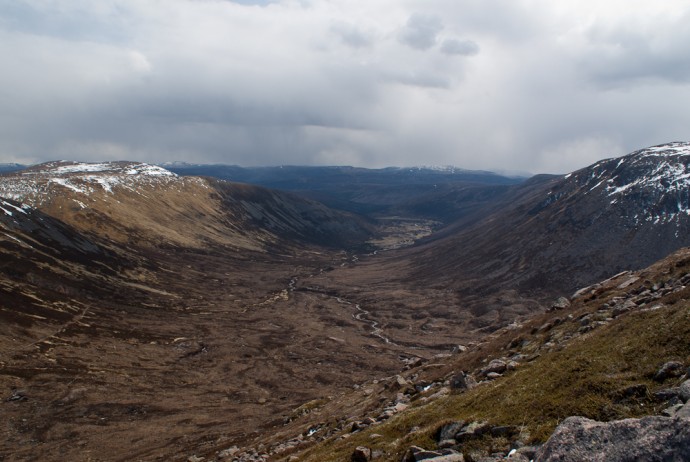 South back to Glen Derry 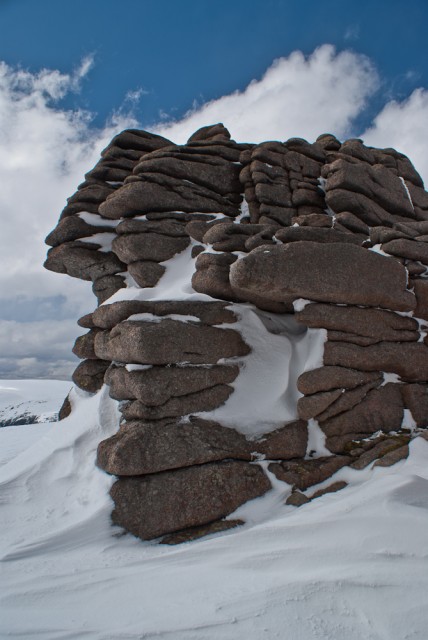 A Barn of Beinn Mheadhoin 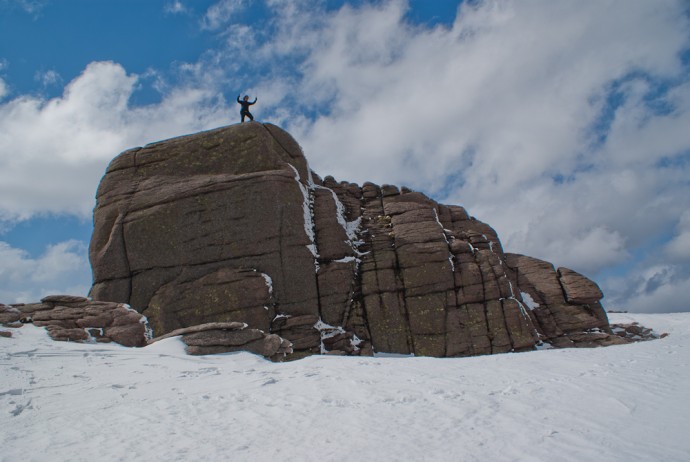 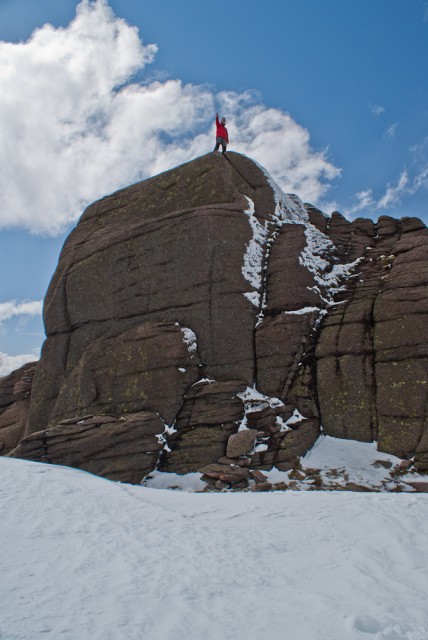 My turn on BM 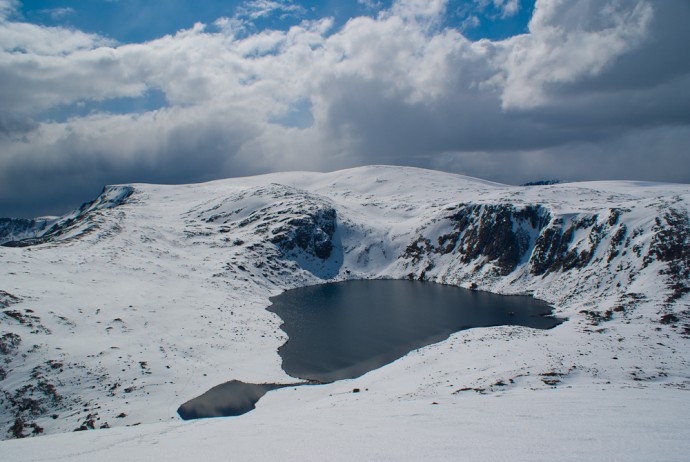 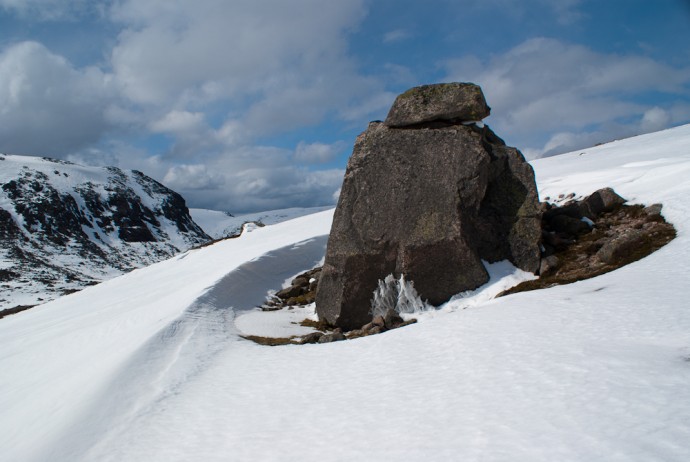 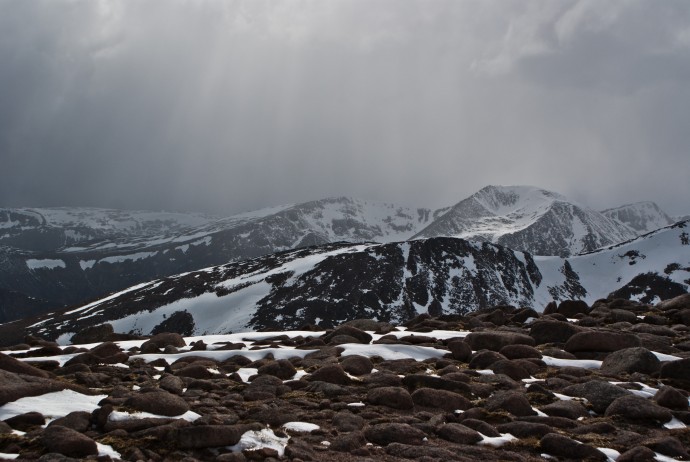 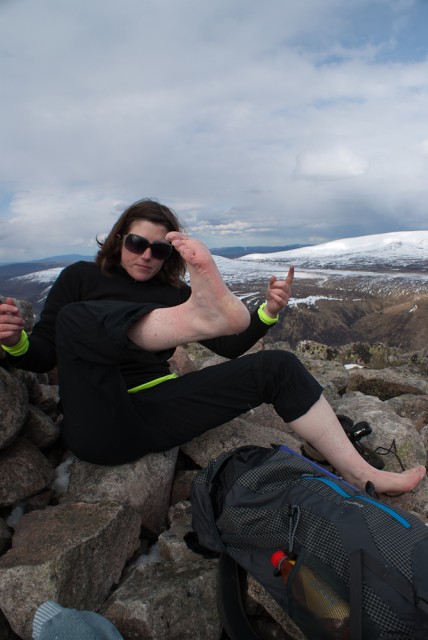 A much needed sock change! Deer on road back to Braemar

RTM - cracking report with some really interesting pictures - love the ones of the giant rock training shoe!

Nice one - a big day with that amount of snow about. Having said that the Cairngorms looked even whiter from the Strathspey (we were visiting the ospreys at Loch Garten).

I do hate it when I'm running bean-less of a morning..couldn't you have lended her some of yours?

Down in the Southern Cairngorms we also had "slight touches of light snow/hail for small periods of time" but also found it really refreshing as it was pretty damn warm a lot of the time! The clouds only came in properly once, and again didn't last very long, but luckily for us it was 10 minutes after we left our last summit so we didn't mind

Photos are lovely...it's nice to get a closer view of what we were admiring from a distance during our walk!

RTMcB wrote: Somehow SMRussell's juice bottle came flying out of her rucksack and descended BM on its own. A skillful bum-slide with ice-axe self arrest soon reunited juice bottle with owner, that was cool to watch

Me in action mode! It was just like something out of Cliffhanger

EwaMH wrote:I do hate it when I'm running bean-less of a morning..couldn't you have lended her some of yours?

I know! Instead he just criticised me for resorting to a few hefty gulps of Aldi energy drink! Damn his eyes!
Glad the weather was better in the South than it looked from the North.

I wanted to do the loop in the exact opposite direction but only did two...
I wonder if you passed us on your bikes? Could you have not given us a backie?
My bright orange jacket should be memorable?

Meatball wrote:I wanted to do the loop in the exact opposite direction but only did two...
I wonder if you passed us on your bikes? Could you have not given us a backie?
My bright orange jacket should be memorable?

At 9:15am, were you one of 2 blokes? We were about 10 mins from Derry Lodge. I think you asked for a backie then? My balance on a bike isn't great, when I look over my shoulder I tend to veer of in the opposite direction

Re: Sunblock, that was my task on Saturday but couldn't find any on sale anywhere. Went with SPF50 - goes on like a paste! Works though, except for a triangular spot in the corner of my forehead where I forgot to rub it in

Bingo!
I have some wacky sunburn lines now...
No sunblock in my winter kit...will remedy that from here on!
It was a cracking day, pity I didn't get the other 2 done.
Hopefully del gets the report done soon.

We made that mistake last weekend on Ben Avon & Beinn a'Bhuird!

Although, it is rather satisfying turning up at work with unexplainable sunburn

I look forward to the satisfaction stage! LOL
Do you have many more trips up that way?
I will never walk that path again!

I've still to do these 4 and will be looking to very soon.

I've still to do these 4 and will be looking to very soon.

Hope you enjoy this set DB - some cracking views

That's a long route to do in snowy conditions carrying winter equipment, well done, RT and SM! I suppose the bikes helped.

I've been considering the very same route for this summer, after the snow's gone but walking all the way. So this report is helpful. You linked Beinn a' Chaorainn and Beinn Mheadhoin with a route very similar to one advised to me by rockhopper and malky-c recently, so it's good to see it worked out well.

I'm also wanting to do Beinn a' Bhuird and Ben Avon (together) the same week so your recent trips have been interesting. The problem for someone living outside Scotland is doing two walks of this length during a week in the Cairngorms. I'd be walking every day, none of the routes short (eg. Carn an Fhidhleir - An Sgarsoch).

Do you think it's possible to do a whole week of walks like this?

Nice shot of the stag, by the way. I like the photos from BM summit as well.

Did you see all the white horses between Braemar and Cairnwell?