Training walk no. 5 for a charity challenge taking place in May/June of this year, visit our facebook page at http://www.facebook.com/13in24 to find out more and, if you wish, sponsor us at http://uk.virginmoneygiving.com/team/13in24.

A day of two halves really, beautiful in the morning and not so nice in the afternoon! As the name of the report suggests we were engulfed by cloud around lunchtime just after reaching the summit of our first munro Beinn Bhreac. There were inversions all over the shop but the cloud rose and the visibility after that point on was pretty poor.

Started off at Linn of Dee car park and marched along the road to Derry Lodge. Took right fork of the path up Glen Derry. Walking through the forest to a high point there is a faint path up through the forest which we followed, this eventually petered out as it was covered with snow. We reached Bhreac in good time, an there were great views across to the Cairngorms massif. But racing up behind us was a bit of cloud that was to totally cover us up for the rest of the afternoon. Views across to the Cairgorms, Angel's Peak et al The cloud gaining fast on us 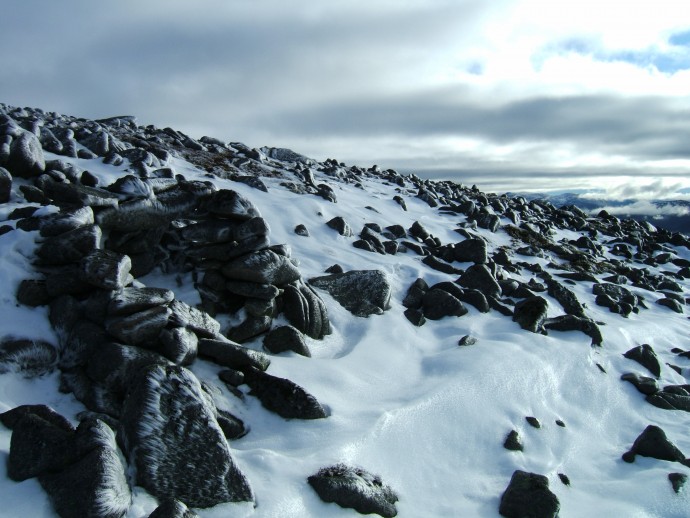 Getting close to the summit of Bhreac After a bite to eat we moved on across the flat frozen mass of peat bog, lucky it was frozen as it would have been torture if it wasn't!

We picked our spot up the side of Beinn a'Chaorainn but had to walk on a bearing to ensure we hit the summit. We stopped again (briefly) at the summit for some lunch and then set about back to linn of dee. Oh how quickly it can change!

Instead of coming down the way we came up we had to descend to the col between Beinn a'Chaorainn and Beinn a'Chaorainn Bheag. It was part of our plan to do this munro top as well but since it had clouded over we abandoned that plan. We then strolled across the peat bog, again walking on a bearing and testing our navigation skills, this slowed us down quite a bit. We were aiming for Craig Derry, but ended up a little to the east at the spot height on the map. I'm gonna blame the bubble in my compass for that

Anyway it was plane sailing after that descending down Coire an Fhir Bhogha into Glen Derry then back to Linn of Dee. Although it was still a fairly long walk and the descent down into glen derry was tough on the legs and they felt like jelly after that! Another training walk down, another week closer to the challenge.

Good luck with the charity event.

Nice going guys. Thats a good pace for the distance. Good luck on your charity challenge.

Good luck with the charity event.

Thanks! We were fair marching down the road after derry lodge! Two weeks time is our provisional date, very much weather dependent. I'm sure a report will appear on here when we get it done. Keep your eyes peeled.

Thanks Monty. Two weeks till the challenge. After some of the walk reports I've read by you, you'd do it nae bother!

Look out for a walk report on the challenge once we get it done.