This is a walk that I had been looking forward to for some time. The mountain itself looks stunning in pictures on the drive north from Tyndrum with its steep ascent and sharp peak. It was also the name of the House where I grew up as a boy in Argyll. (Although I lived there for more than 15 years the only hill I ever climbed was called “The Camels Hump” in Dunoon). So there were going to be lots of memories to think about on this walk as I tackled one of Argyll’s finest mountains.

I almost didn’t make the walk however as I couldn’t take my eyes off of Beinn Dorain when it came into view driving towards the Bridge of Orchy Hotel. I’m sure Ruby had her paws over her eyes as the car swerved along the road. What a mountain – I had to stop and take a picture for myself! So having left the house at just before 6am we pulled up at the hotel car park bang on 7am. As you can see from the pic Ruby is keen to get going! The route was very straight forward. Cross the road at the hotel, walk to the left about 50 yards and follow the signs for the train station, go under the bridge to cross the railway track head up to the gate (we were treated with the sight of The Royal Scotsman getting ready to depart). and then follow the path straight up the Bowl of Coire an Dothaidh.

I wasn’t sure if I was going to tackle Beinn an Dothaidh as well as Beinn Dorain. It was estimated as a 6-8 hour walk and I had promised Mrs 2D I would be back by 3pm. I decided to leave my decision until I returned to the Beallach between the two hills.
We reached the Beallach after about 90 minutes and a great Cardio work out! While I was sweating buckets it was clear this was just another walk in the park for Rubydoo! The broad ridge made for an easy but interesting climb with lots of rocky outcrops to navigate but giving a clear path all the way to the summit. There is a great little spot for wild camp near a lochan before you get to the Carn Susunnaich. The little Lochan - nice spot for a wild camp

the same lochan on the far left of this panorama

MWIS had predicted both clear skies and possible white out/snow showers!!!! For now we were getting the clear skies option. The views all around were superb and with no wind at all it was easy to enjoy them. As we crested a top I got the first view of Carn Susannaich which I have to admit I thought was the summit. our first view of Carn Susannaich

Once we reached the cairn we did get our first view of Beinn Dorain summit. With what looked like a fair amount of snow and the possibility of slippy conditions under foot I got a little adrenalin trickling through my veins.

I am the first to admit that I don’t have much experience yet walking in snow/icy conditions. However with a little care and attention we were able to easily follow the path to the summit. There was a cornice just below the summit which was unstable and melting underneath and I made sure to avoid walking over it. Just as we got to the summit the dark clouds rolled in and the first snow of the day fell. At this point I had only met two other people on the hill. An older chap and young guy walking together. They had been to the summit before me and I met them just after the lochan. We had a little chat and at this point I didn’t notice anything unusual at all about them... more later!
A few minutes after we started our descent we bumped into a group of four guys and stopped for a quick chat. After a minute or two one of the guys asked if I was on WalkHighlands. I said yes and he said “you must be 2dalmatians and that must be Ruby?” I guess there aren’t too many Dalmatians with hillwalking as their main hobby :lol !! One of the boys asked if I had met the two guys who had been walking with not much more than a string bag for equipment. I said I had but hadn’t noticed anything unusual about them and that they had said they had been walking in the area for a couple of days....? The guys were walking at a much faster pace than me and I was sure they would catch up soon, however it wasn’t until near the summit of Beinn a Dothaidh that I would see them again. They must have stopped for a bite to eat somewhere on the way down. Nice to meet you lads (Soulminer, Doogz, Alan and Nelson)
As we made our way back down to the Beallach the weather worsened and snow started to fall. Giant Boulder on a ledge - do not walk underneath this!!lol

Time looked a little tight and with the weather turning I was about to call it day and head back when I spotted the two walkers from earlier heading down the path from Beinn a Dothaidh. Curiosity got the better of me and I decided to go for the second munro. After about 15 minutes we met the 2 walkers again. We shared a few words and a joke or two. Now here’s the strange part – both were wearing trainer with light trousers – in fact one of them had a standard pair of suit trousers on – “M&S” I think!...and yes a basic string bag shared between them... We said our goodbyes and they walked off without a care in the world. Care free... or reckless...I’m not sure which :lol!!
The weather was really unpredictable and after another 20 minutes we were back to sunshine again  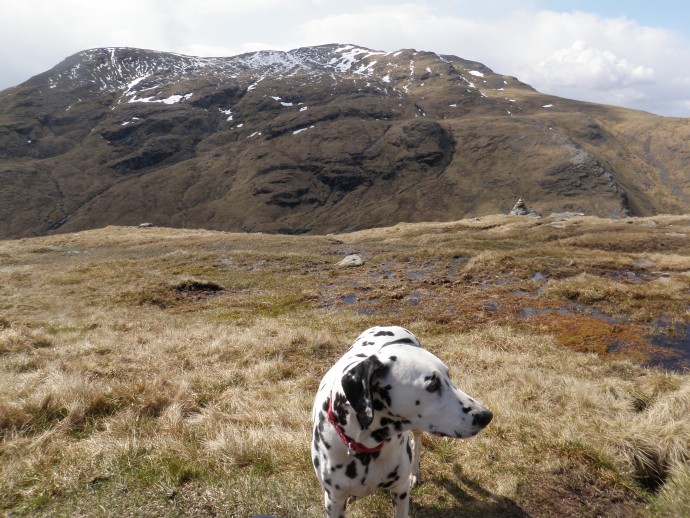 The climb up to Beinn a Dothaidh was fairly straight forward over grassy slopes. There was a fair amount of wet/boggy ground but nothing too difficult to get through. As we approached the final ridge we caught up with a group of three walkers ahead and the 4 WH guys caught up with me. So it turned out to be a busy summit and rich pickings for Ruby with bits of sandwiches coming from all directions! approaching the summit of Beinn an Dothiadh??? So with eight walkers and a few maps you would expect at least one person to be sure that we were at the summit!! Nope...lol . There were 3 cairn choices so we had to touch them all just to be sure. or maybe this one?? or maybe this one??? answers on a postcard please! Ruby on the ridge

Looking over to Loch Tulla

The ridge viewpoint looking over to Loch Tulla was really spectacular with apparently a drop straight down to the road from the ledge. The three chaps in the photo are right on the edge. Where I took the picture is about as close as I got to the edge!!! Lol The return back to the car was uneventful and so finally after just over 6 hours we made it back to the car at the hotel, tired but delighted with another stroll in the park!

It was a great day out for all concerned. Bit of a pain layering on and off, I run hot so don't like any more than a base layer

You met us on a slower walking day, each with a turn at the front- Commanders Legs

Do I smell Salmon ?

Hi 2D
This is one of your best reports you have written loved it and the picture's are magic.

Bod- its a shame you didn't make it. Would have been good to meet another WH member on the hill.

Nice report 2d , I passed you as you were crossing the road at the hotel at 7 , I saw the dalmatian and thought 'there can't be many of those on the hills , must be 2dalmatians '. Later on at Victoria Bridge I met another walker setting off with his dog , also a dalmatian , so I'm glad you posted this to clear up any confusion

Excellent report on a great walk. We're hopefully heading to these hills soon as we'd put it off over the winter months.

See you mention Dunoon and the Camels Hump

Been up there several times as I'm a Dunoonite, maybe that's where all this hill walking carry on started for me.

Excellent report 2D.... Ben Dorian is a great looking mountain from the A82. Great photo of the cornice below the summit. Nice set of photos all round. Superb.

Your dog looks very chilled out

Yeah the view when you turn round Tyndrum and see the steep slope is awesome...always fancied going up that way in the snow.

Smiffy - truth be told I am also from Dunoon. Haven't been back for over 10 years though as my family moved away. I left for the big smoke (Glasgow) in 1987 and never really looked back. Found memories of a childhood in a great wee town though