I had been looking forward to these two ever since I walked past them on my way to Cape Wrath a few years ago. I have been gradually working my way up the country ticking off Munros and at last I find myself way up north. It was a superb day as I set off from the car park near the hotel at Inchnadamph. Loch Assynt was a deep Mediterranean blue with Quinaig towering up behind. 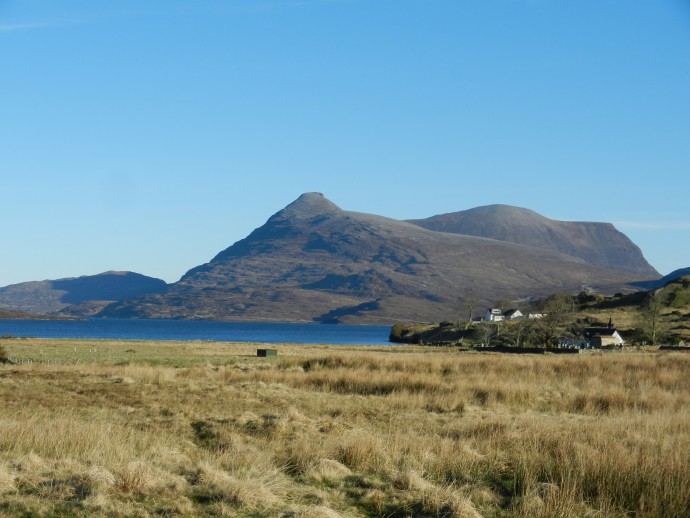 The broad track crosses a burn and winds up past Glenbain cottage before giving way to a footpath. At a small plantation the track divides: the left hand branch leads to Conival. It was a very pleasant walk alongside the River Traligill spotting lots of great camping spots along the way. Great views across to Canisp. 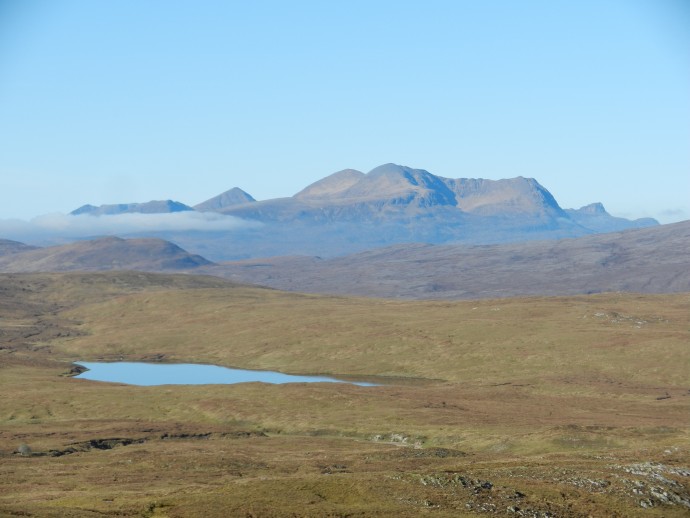 After a couple of kilometres the path steepens, still following the burn, and leads up to a flatter grassy area and finally, after a short scramble up a rocky wall, to the bealach between Beinn an Fhurain and Conival. There beneath my feet was a sea of brilliant white, quite a shock when the air was so clear on the west side. Scrambling up boulders and scree I encountered a patch of fairly solid snow but I kicked a few steps and found myself at the summit of Conival. The ridge across to Ben More looked enticing so I didn’t hang around. There was quite a lot snow on the rocky descent to the ridge so I proceeded with caution until I reached more level ground. The ridge to Ben More

The ridge was quite rough but good fun and after crossing a few more patches of snow I reached the small summit cairn of Ben More. 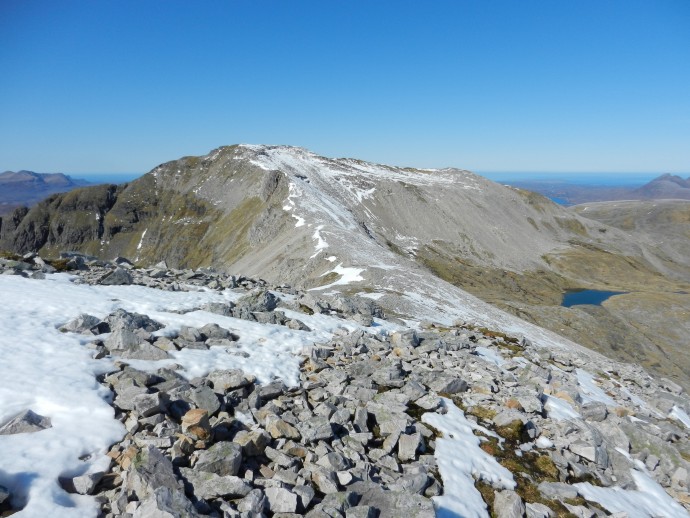 I decided to make it a more circular route by continuing towards the south summit and dropping down to Dubh Loch Mor. 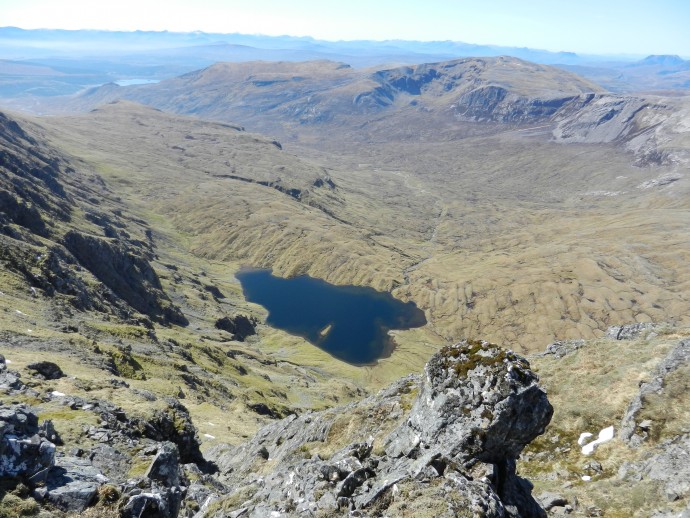 The ridge itself presents a nice little stretch of easy scrambling. The descent to the loch, however, was horrendous. If you have been using the same pair of knees for over 60 years it is not to be recommended! It would have been better to have gone further along the ridge to where the slope eases somewhat. However, I finally made it to the loch and indulged myself in a cup of tea to aid the recovery process. Then up to the bealach between Conival and Breabag Tarsuinn. From there I decided to head across Loch Mhaolach-coire: a little blue bird on the map indicated this to be a nature reserve. However, there was not a bird in sight! So I cut down to the Traligill Caves which were much more interesting and well worth a visit. In one cave water rushes down under ground: I wonder how far you can go underground? 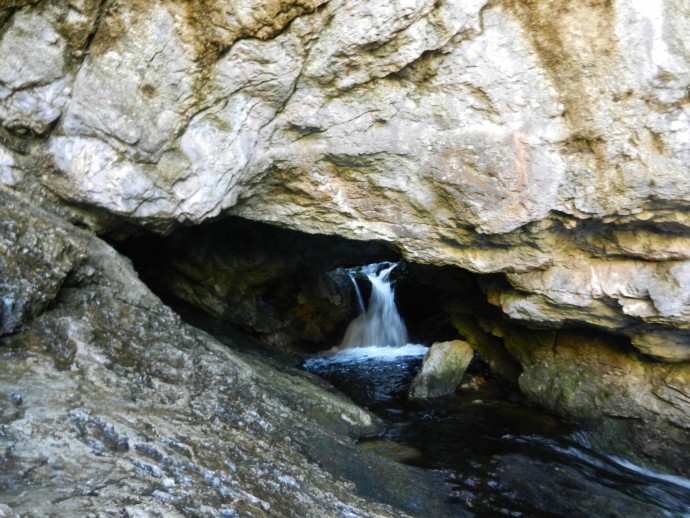 It was only a short distance back to the car park where the car told me it was 27 degrees! I had forgotten my sun screen so had got a bit burnt: I had to put my fleece on to protect my arms!

What a smashing day for the walk Boots.... Superb photos of remote hills. Love the cave. Nice

Thats a excellent report and photo's... plus its very handy as i am going up there in a couple of weeks to do the four.

You got great weather...i didnt

I've just had to postpone a birthday trip up that way that was meant to start in just under 2 weeks...gutted...and seeing your reports is making me want to cry as much as it makes me really excited for finally getting there.
What conditions you got!! Amazing! I can only hope we get half of that

Ben More south ridge was our highlight of the day when we did those 2 Munros. We eventually reached the summit of the Corbett Breabag in the dark.

Thanks once again. Dave

I agree that the descent from the south ridge of Ben More Assynt is horrendous. I don't know why the SMC book of Munros suggested it as a route. I am glad I had two Leki sticks to give me some stability on the very steep grassy sections. These sections ended in vertical cliffs so a route had to be found to get around them onto some more grass and some more cliffs. It took me one and a quarter hours to get down to the loch at the bottom.