The Stuchd in Blue Blue Skies

The Stuchd in Blue Blue Skies


Arriving at the dam around 9.45 there were quite a few cars here already but managed to get a place alongside the road. We were both greeted as we got out of the car with the sight of a Golden Eagle soaring not too far above. The spectacle took my breath away and I froze not moving so as not to drive the bird away too quickly. As it happened the creature kept circling getting ever higher with little beat of its powerful wings, we watched it disappear over Meall Buidhe.

Great start to the day

Anyway I am not going to discuss the way to go on this route as many of you on WH have wrote reports in the past which indeed is where I researched my route from. Thanks to all of you for reporting missing the turn uphill towards the Giorra Dam and quoting this on WH, as a result I made the correct turn. However I do recognise how easy it is to miss the turn and keep going past the turn off.

The way up is clear and a small cairn marks the spot on a track before the boathouse where you begin the gentle traverse up the hill, soon you are above the boat house where the route becomes much steeper. There is need I believe of some restoration work here as the countless thousands of boots looking for a good foothold have eroded the hillside. We followed what looked like a dried up stream bed which in all probability had been created with the erosion of boots. As would be expected on such a clear day the views got better and better as we climbed.and in no time at all reached Creag an Fheadain. The top of Stuchd an Lochain can be seen from here for the first time, however the anticipated view of the lochan below was not yet in view.

As we progressed towards the top of Sron Chrona Chorein the lochan and its corrie come into view and it is a tremendous sight indeed. Mountains were appearing from everywhere I have never witnessed such a clear day and was absolutely delighted.

On reaching the summit cairn I witnessed the best ever view I had seen in my visits to Scotland and was simply struck in awe at its beauty. All around and as far as the eye could see were magnificent peaks, and standing there proudly was the mighty Ben and the Mamores, the Glen Coe Hills appeared as though you could reach out and touch them, Mighty Ben More and its companion Stob Binien were equally stunning with their caps of snow..

Ben Alder is a massive bulk and is now included on my list of must do, to the right of Ben Alder in the distance and shining white were the magnificent Cairngorm Mountains. I really could not believe how clear everything was today and was in my absolute element.

I only have a few opportunities to venture North and my last visit to the Highlands was in September of last year when my wife Carol and I walked the West Highland Way in awful weather, followed by a similar trip in clag on Skye with little views on any of these days

, so to see this spectacle following that experience was wonderful. View from the dam wall into Loch an Daimh. The view from above the boathouse 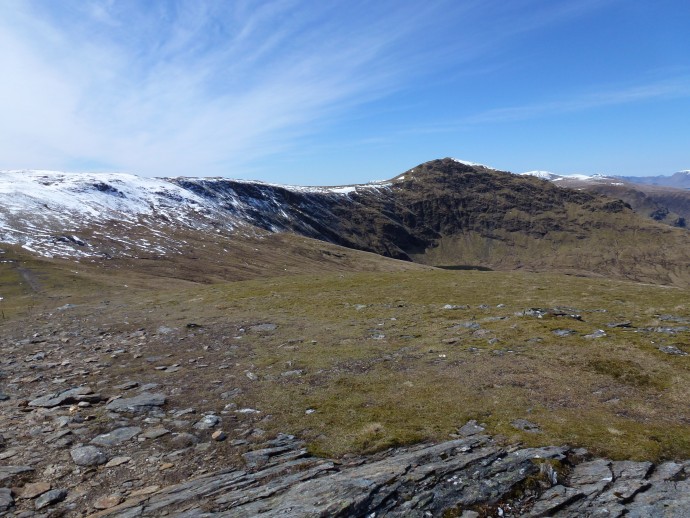 Looking down to the Lochan Stuchd an lochan with the Ben in the distance The Ben and CMD zoomed from the same spot Glen Coe hills and Rannoch Moor, I couldnt see 20 yards in front of me when I did the WHY in September so this was spectacular 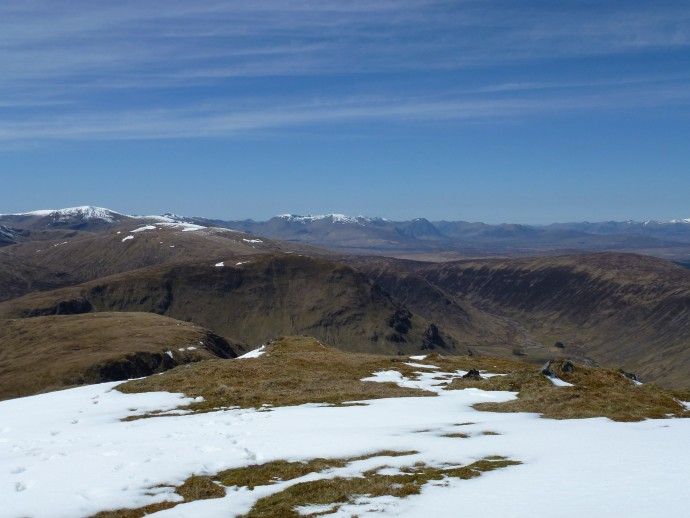 A wonderful day was had today and saw much much more than I have ever seen .....I am totaly hooked and realise I cannot climb many of those beautiful hills because of my home location. However i have a few in my sights and certainly enjoyed them today without climbing them all .Cheers all

Nice to see you up these parts, and enjoying the lovely weather

Wow, what fantastic photos of those amazing views

So glad you and Carol had some good weather, Geoff

At least it took your mind off the football

I think that's as nice a day and as clear a set of photies as I've ever seen for that hill. My own experience of it was utterly miserable and that is some understatement!

dooterbang wrote:Nice to see you up these parts, and enjoying the lovely weather

So glad you and Carol had some good weather, Geoff

At least it took your mind off the football

Football!!!! its the cricket season now

Graeme D wrote:I think that's as nice a day and as clear a set of photies as I've ever seen for that hill. My own experience of it was utterly miserable and that is some understatement!

Graeme thanks thoroughly enjoyed it

Great day you got with superb views, you should come up more often as the weathers allways like this up here

You got some brilliant views there, L-Hiking, seems like you had a great day. Persist with Scotland through the mist, wind and rain and the clear days come eventually! How long were/are you up for this time?

One good thing for us about the Southern Highlands is that we can do a Munro the same day as travelling to or from Yorkshire. I've done that with Ben Chonzie after driving up in the morning, and at the end of that week did Tarmachan Ridge before driving home in the afternoon.

I hope you get some more Scottish days like this one in the future.

Yep, nice one and a cracking day for it. I've enjoyed a few trips up Stuchd an Lochain in the past crossing over from Pubil at the back and ending up back down the to an awaiting minibus at the dam when I used to take Scouts hiking in Glen Lyon. A favourite munro of mine

Johnny Corbett wrote:Great day you got with superb views, you should come up more often as the weathers allways like this up here

simon-b wrote:You got some brilliant views there, L-Hiking, seems like you had a great day. Persist with Scotland through the mist, wind and rain and the clear days come eventually!

Cheers Simon, yes I was delighted getting the good weather for a change...Spent a few days so got a couple more reports to do

Bod wrote:A favourite munro of mine

Cheers Bod, great mountain with lots of character too

Lovely pics. When I did this I was in the clag from the dam...