After the efforts of the Five Sisters we were joined by 4 more walkers, 2 staying in the hostel and 2 camping. This required another planning meeting. Normal chinese parliament followed and we had to rebuild the 3D map as being house proud (hen pecked) we had tidied up all the detritus the previous night.
We were joined by George & Norrie from Perth, seasoned walkers (the seasoning later turning to sousing as they foolishly mixed the grape with the grain - more Laphroigitus). Norrie was a strummer and a crooner and was persueded to do a set with a £16 guitar that George obtained from ebay on the way up to Kintail for their week.
Lights out early tonight only 00.30, think it was the 'long wait' for food in the Kintail Lodge earlier that afternoon. Revellie at 06.30 again, breakfast and out to meet up at the petrol station for car share. Breakfast was crowded as an Edinburgh walking club (24 strong) had turned up overnight, I've seen less health food on display in Holland & Barrett than was put out in the kitchen
Set off from the car park adjacent to the Cluanie Inn by 08.30, we had been advised to walk to the back of Creag a'Mhaim and follow the stalkers path up. The sun was out and quickly the layers came off, the road takes you to height of 410m then the path zigzags steeply up the hill, It was only a 538m climb but it seemed to take an eternity. 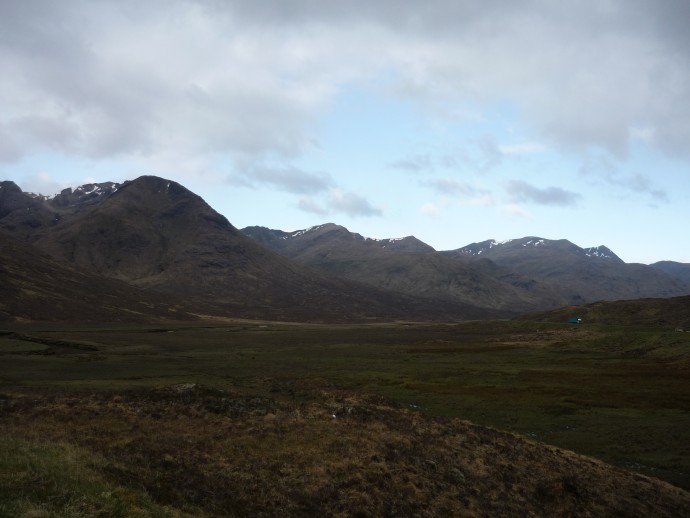 Looking up Glen Shiel from the car park 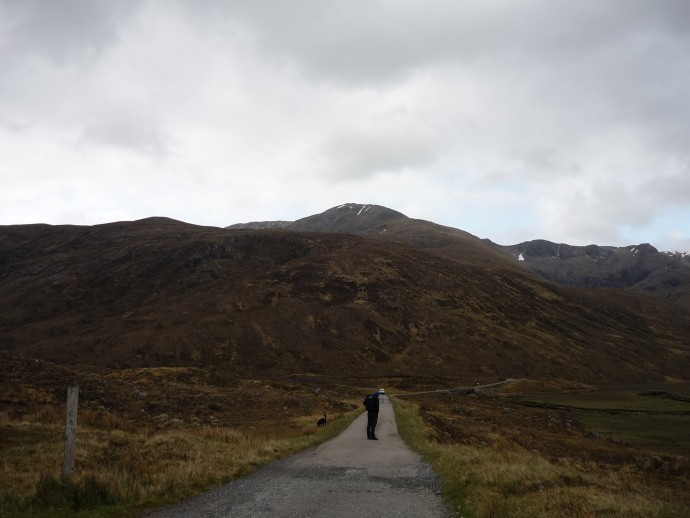 The start of the estate road 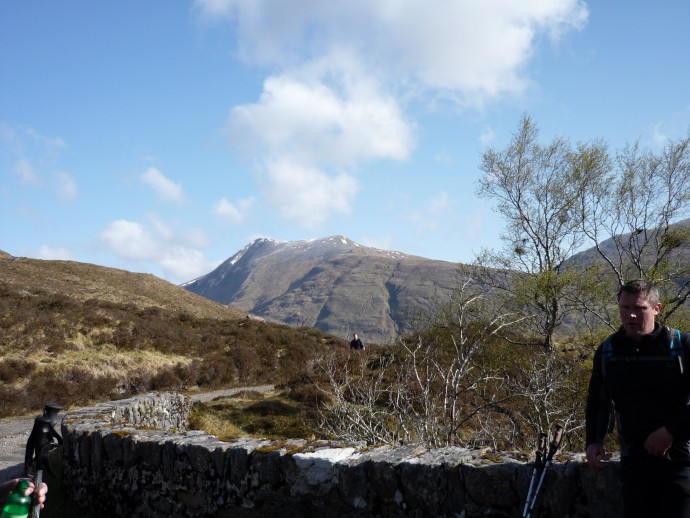 Across the loch to A'Chralaig 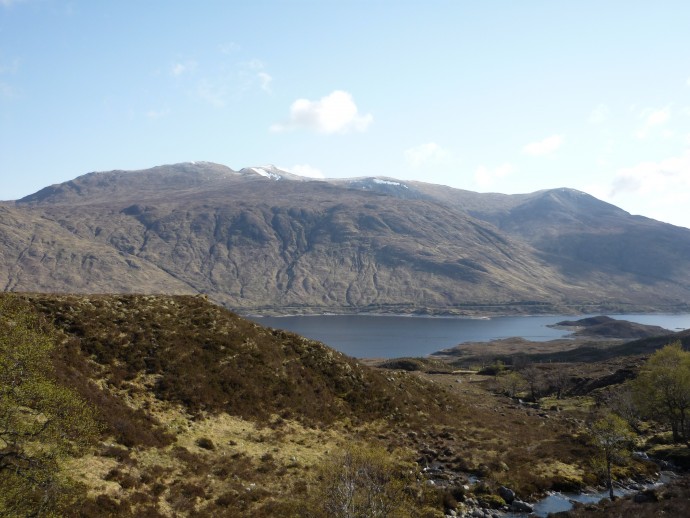 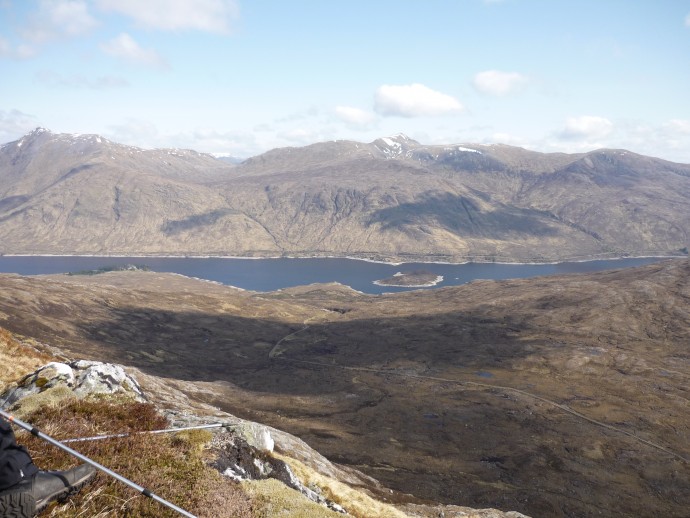 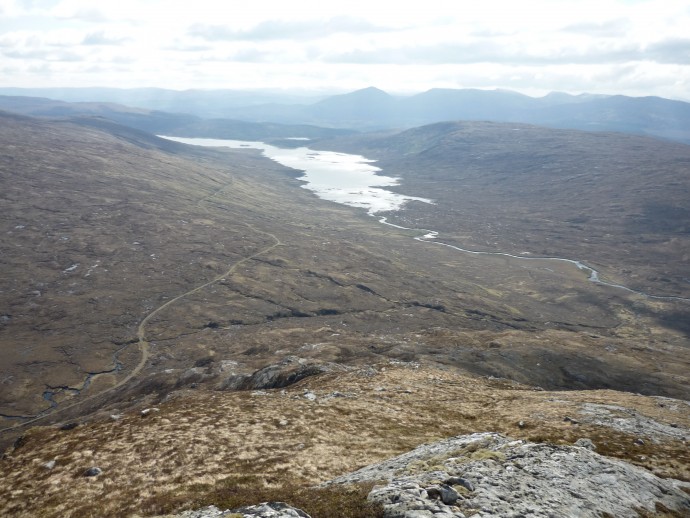 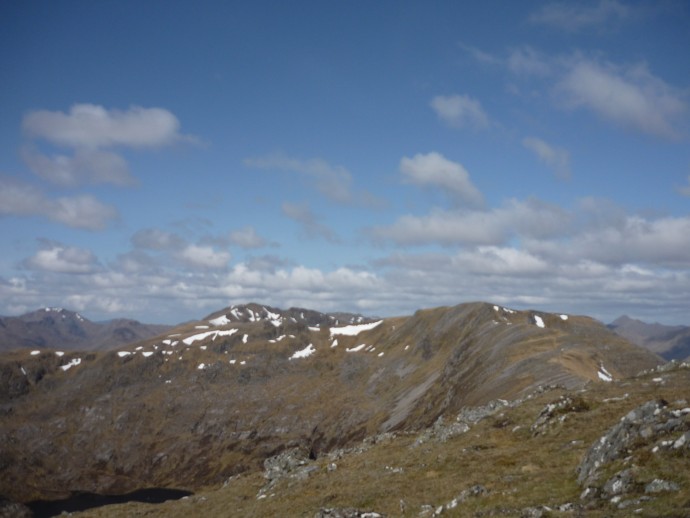 Along the ridge from Creag A'Mhain

After a pit stop the serious walking began and because of the mixed abilities a steady pace was set with plenty of stops. The way my lungs felt I considered starting smoking again (thought I had cleared a cold the week before but it was lurking in the back ground) walked most of the ridge with a number eleven under my nose.
The rolling ridge between the first two munro's gave way to a little scrambling and some fine sharp ridge walking, nothing too exposed but a sense of airiness all the same. 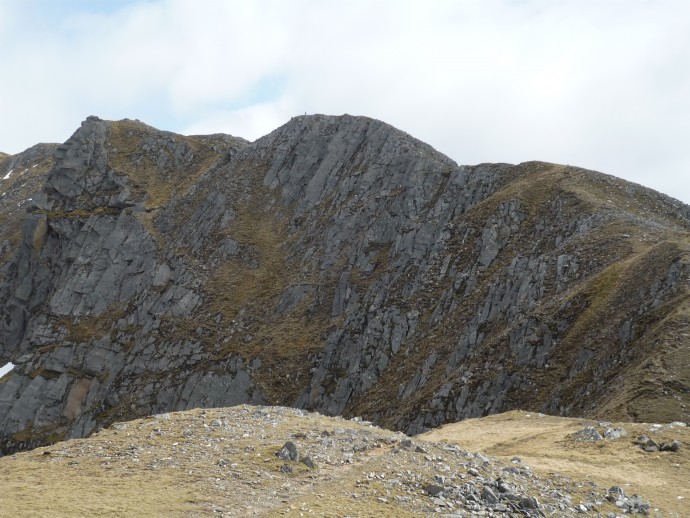 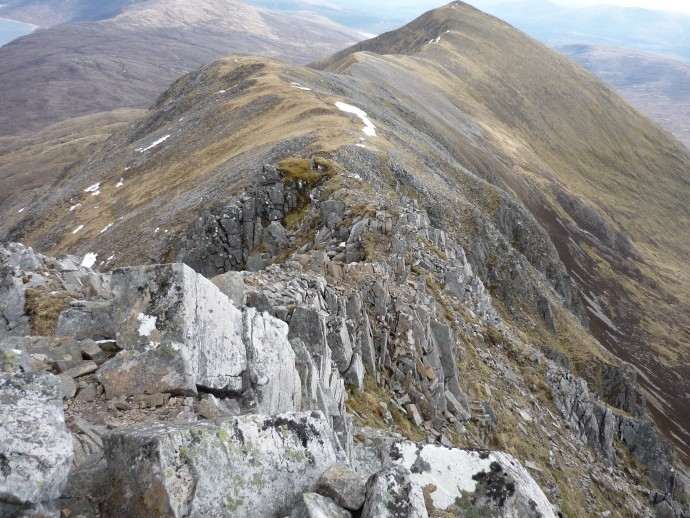 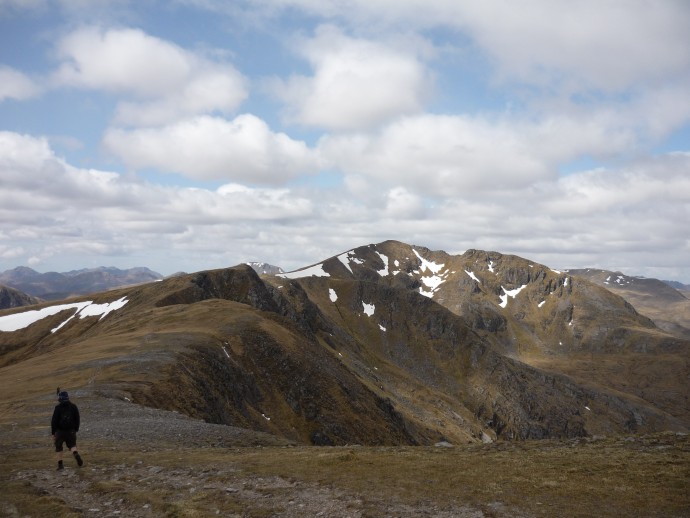 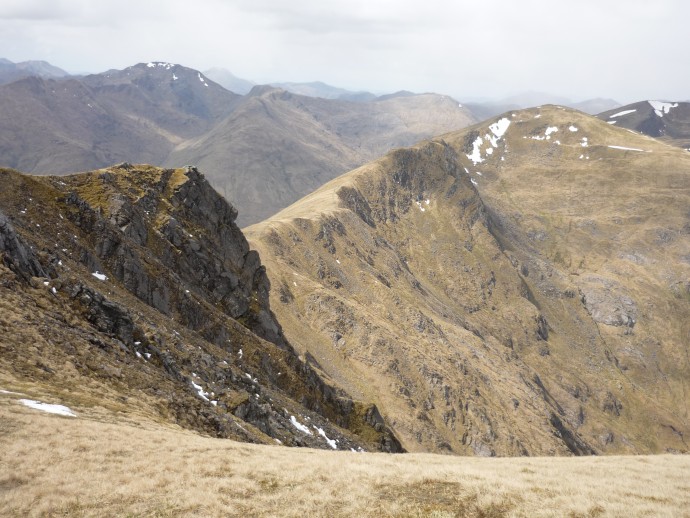 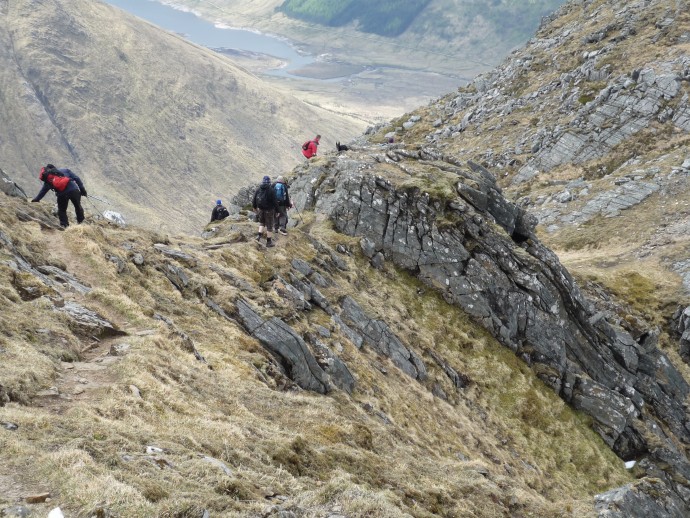 Then the definition of a munro came into play - a hill separated by at least 100m of descent, the peaks of Maol Chinn-dearg, Sgurr an Doire Leathan and Sgurr an Lochain lined up like inverted ice cream cones and the km's piled on. 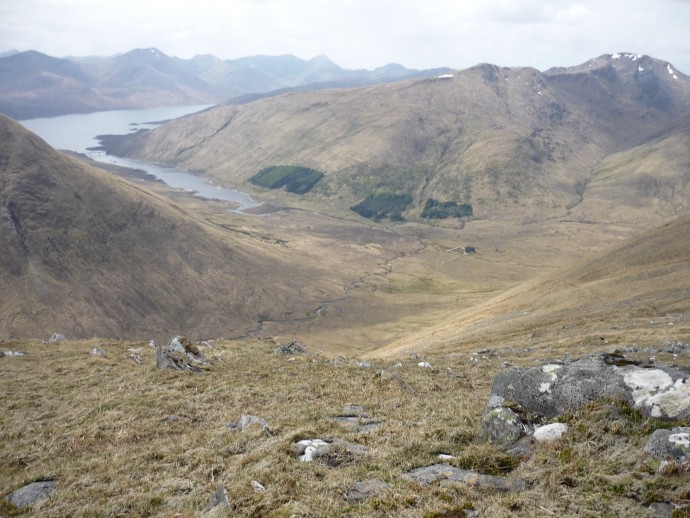 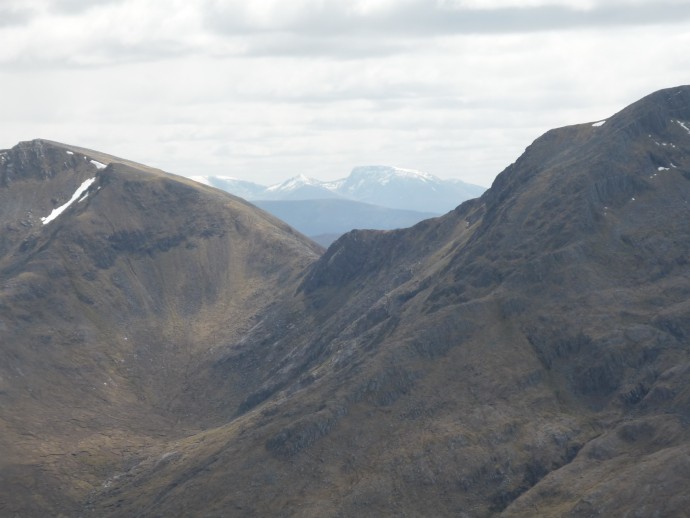 Through Creag Coire An Fair Bealach

Somebody thought we would make the FA Cup Final kick off - no, nor the second half, nor extra time, we may be early for next year though. 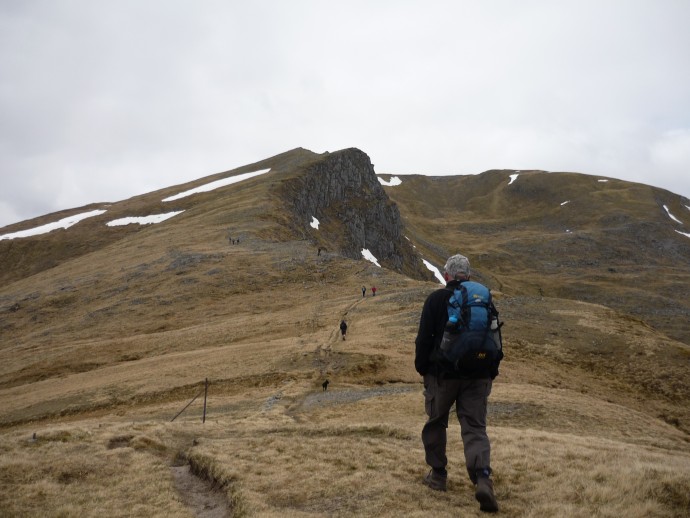 Nearing the end, no but my batteries are

From the top of Sgurr an Lochain the low route around Sgurr Beag can be seen, a life saver for the tired legs of some. That is until you clear the hill and see the ascent up Creag nam Damh, 192m , the first half is a zigzag path of steps in the peat/rocks but the top half is a wonderful little scramble over slabs of rock and a large boulder field. Food for the soul after the slog up the first part.
Waahoo we have made it, pats on back all round, team photos, then the sense of euphoria evaporates as the map/calculations show how far back to the road, especially as our route led down from the Bealach Duibh Leac and the path along Allt Mhalagain.
You can see the trees at the roadside all the way down but no layby, the obvious doubts and questions rear about where are the cars. Not until you actually arrive at the roadside does the layby appear 100m to your right - phew. As a final goodbye from the hills we have a heavy snow shower that leaves the tops white in the dying sunlight
10.5 hours but well worth it, quick to the Kintail Lodge there might be a beer shortage. Needn't have worried it was Saturday night after all. A good dinner followed by a long shower back at the hostel then down to the lounge with the chinking carrier bags. George, his wife Sue and Norrie with guitar were waiting but strangely nobody was in the mood. You can't burn a candle at both ends without burning your fingers. And yes we were all up for breakfast at 06.30 with nowhere to go so did the culture vulture bit and drove to Eilean Donan castle to catch the early light for some photos.

Already tentative dates are being bandied about for next year as there is lots more to do up there. I'll publish the dates just in case you are the sensitive type.

Good report and pics. Also good timing. If all goes to plan im heading up to do this in June. Thanks