We chose the Bank Holiday weekend to climb these 3 remote hills, having already climbed Beinn a’Chlaidheimh in a disasterous rain and midgie ridden trip from Shenavall previously. We decided to attempt these 3 from the direction of Kinlochewe as neither of us fancied the long walk in to Shenavall again. Leaving the car at Incheril we followed the clear land rover track that leads up to the Heights of Kinlochewe, initially starting off in sunshine which rapidly turned to rain then sleet then snow! A left hand fork at the Heights climbs up into Gleann na Muice, quite a tough steady climb with a very heavily laden pack. At the head of the valley the path continues downwards past a small lochan and then to the head of Lochan Fada. Here we pitched our tent and as it had thankfully stopped sleeting we were able to cook up a quick meal before bedding down. We woke nice and early and were greeted with a calm, clear and very cold morning. 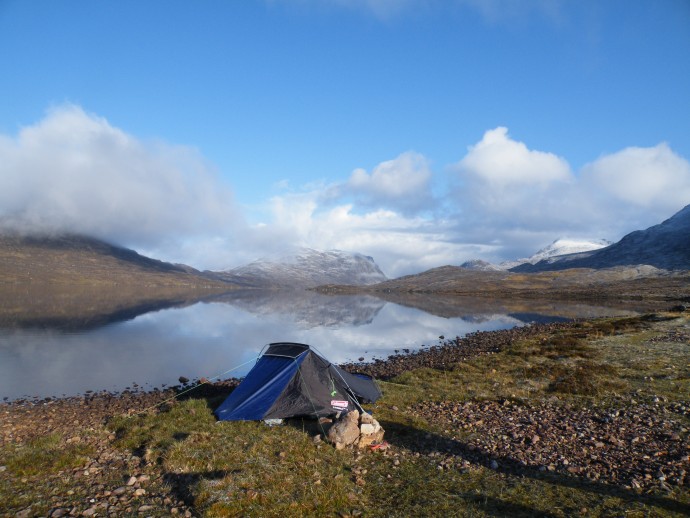 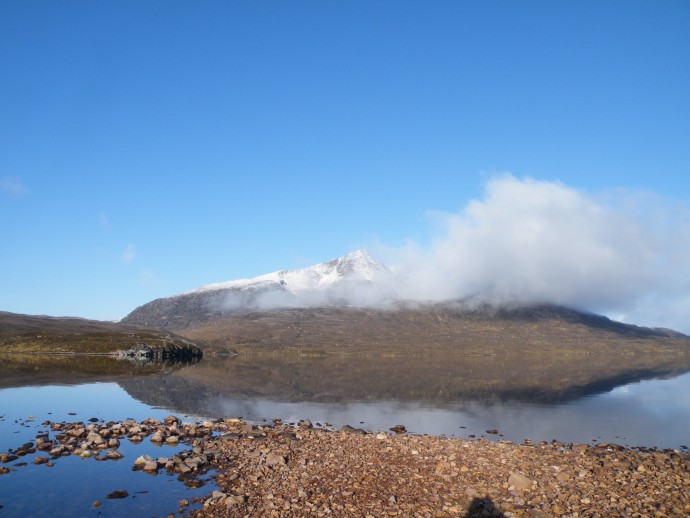 The previous evening I had spotted a rough path that seemed to head directly up the hillside north from lochside, this was a bit trickier to spot under snow but a large gully makes an easy feature to navigate by, we basically followed this gully all the way up to the bealach between Beinn Tarsuinn and the Top Meal Garbh, an easy pull which took less than an hour. The brief snowstorm settled and the skies cleared to give azure blues skies and cloud free summits. Leaving Tarsuinn till last we turned our attentions to Mullach Coire Mhic Fhearchair which looked gorgeous with its mantel of fresh snow. 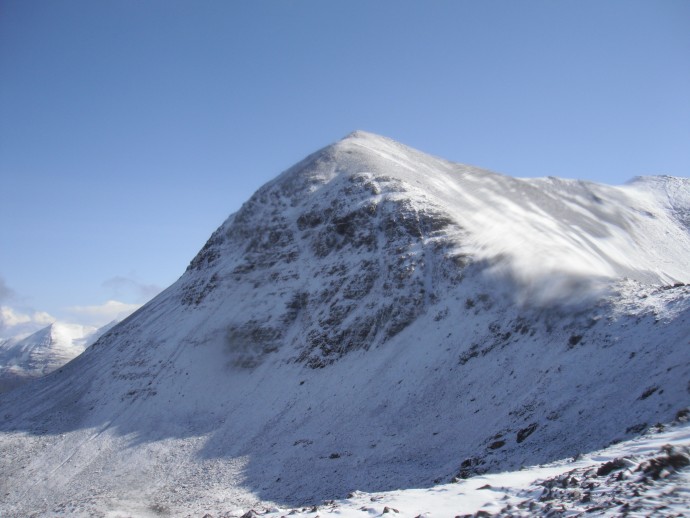 Rather than climbing over Meal Garbh which looked quite imposing we spotted a rough stalkers path skirting the northern flank of this hill and without too much difficulty we followed this to the next bealach. 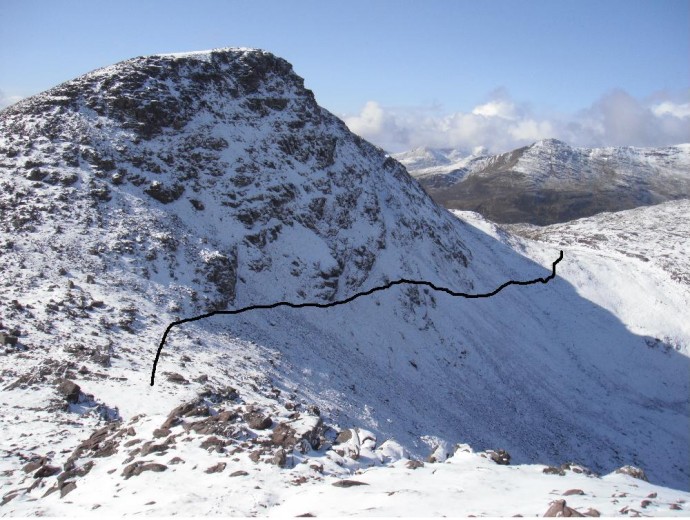 The climb up to the summit was fairly tough under fresh snow and especially over awkward quartzite boulders, neither of us were looking forward to the descent back down. There was a short walk along the ridge to gain the summit with superb views in all directions. 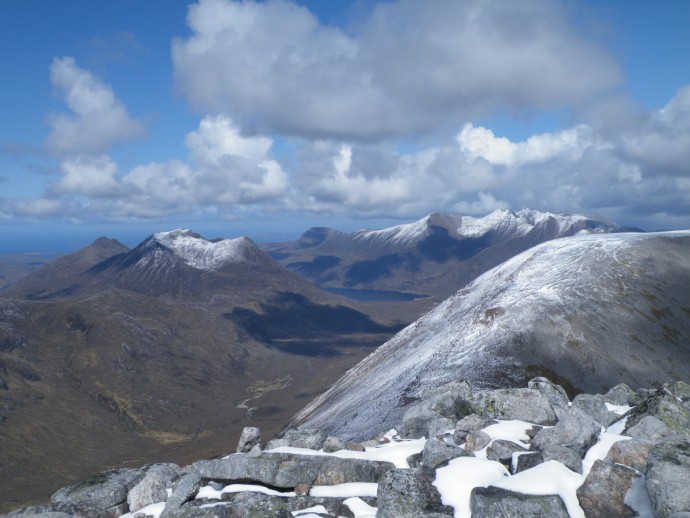 We met 2 lads doing the full circuit from Shenavall who seemed pretty surprised to see us coming from the other direction at that time in the morning! The decent towards Sgurr Ban was really quite hard going in the conditions; it’s a steep decent initially over very awkward shattered boulders. The snow here was at its deepest and we were glad for the footprints of the 2 lads we had met to show us the best line of descent. The ascent to Sgurr Ban in contrast was extremely easy and the views from this summit across to An Teallach and the stunning Corbett of Beinn Dearg Mor and beyond were breathtaking. We knew it was going to be tough going back over Mullach so we headed back down off Sgurr Ban and started back up the way we had come, thankfully it was nowhere near as bad ascending as it had been coming down and we were back up at the summit in less than 35 minutes after leaving the summit of Sgurr Ban. We paused to take some photos looking across to Tarsuinn’s famous “Tennis court” before picking our way cautiously back over the boulder strewn southern slopes of Mullach. 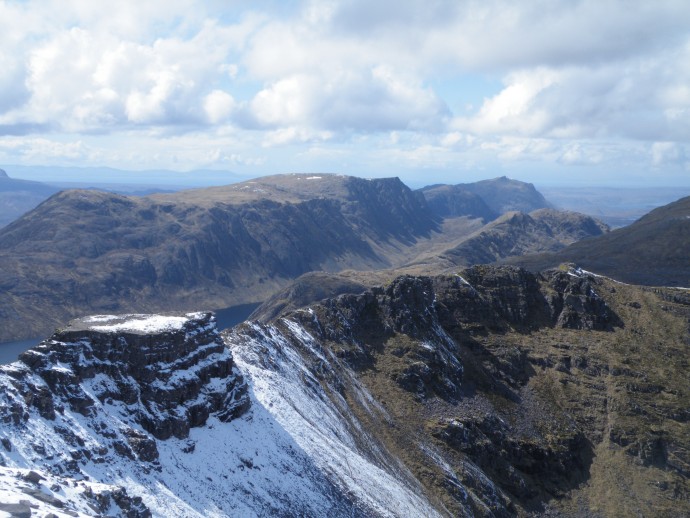 The snow had melted quite a bit by now which made route finding a lot easier and the descent wasn’t as bad as anticipated. Then it was back across the stalkers path and on to Tarsuinn. It’s a much more gradual climb initially on grass through bands of Torridonian red sandstone before reaching a path that climbs more steeply before reaching the summit. This rewarded us with the best views of the day looking straight down Gleann na Muice towards Shenavall and An Teallach beyond. 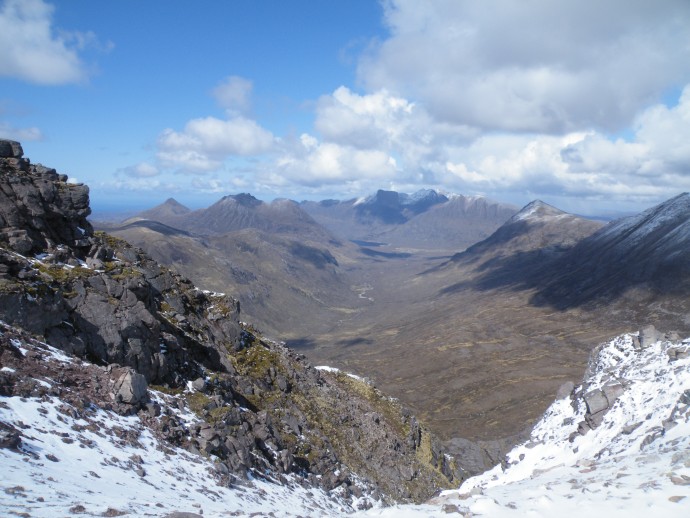 Gleann na Muice to An Teallach

We picked our own route off the summit bearing in a south-easterly direction down grassy slopes to reach the head of the gully we ascended by. We then picked up the path leading back down to our tent at Lochan Fada. It was a beautiful afternoon and we had plenty of supplies so we decided to stay another night and relax and enjoy the scenery before packing up and heading back out to Incheril the next morning. It was then straight to a cafe in Kinlochewe for the best pot of tea and all day breakfast! All-in-all a wonderful weekend spent in one of the wildest parts of Scotland. We were blessed with good weather, clear summits and best of all, while the bothy at Shenavall must have been packed to the gunwales, we had the peace and tranquillity of lonely Lochan Fada all to ourselves for 2 whole nights. 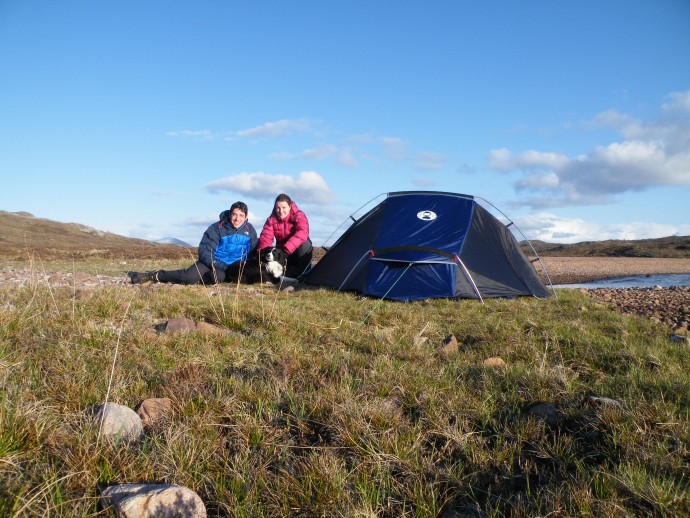 Thanks for bringing back happy memories from last year from a similar route, although no snow for me (in April)

Excellent report - and you have also shown the way to avoid the bogs around Lochan Fada!

That really looked a cracking trip.