MrsR was away, and I had the opportunity for a long weekend in the Highlands

I had hatched a plan some weeks ago for a wild camping expedition, but weather and work commitments had seen that shelved. To be honest, I haven’t camped in over 20 years, so common sense suggested I was probably being a bit optimistic with my plans anyway

Right up until the last minute it was looking like my revised plans might fall apart anyway, but as Friday wore on everything seemed to be falling into place, giving me the Monday off as I had hoped. I’d be camping, but in the relative luxury of a campsite

Setting off before the first light of dawn on the Saturday and I was like a little kid........all excited at the thought of a little camping expedition. I’d packed my stuff as if it was a wild camp trip, just so I could see what I used, what I didn’t and what I could do without. I didn’t think I had a lot there, but it still seemed to weigh a ton

And with a car boot full, me thinks a re-think on my kit might be in order

I had set off with great plans for the weekend, to bag a fair number of Munros. In the end the actual number was perhaps modest. But, with good weather and great views on offer I soon reappraised my objectives and decided I’d rather enjoy the hills I did tackle on the trip, rather than run about the place like a blue bottomed fly bagging plenty but not getting the same enjoyment out of it

Having been in the eastern Fannaichs the weekend before the plan was to tackle some of the western ones. I’d set off planning to do all five, but decided instead to limit my efforts to just A’ Chailleach and Sgurr Breac, which are the two most westerly ones (if you ignore Fionn Bheinn which stands alone on the other side of Loch Fannaich).

Arriving at the parking area and here were a fair number of cars there already, so it was looking like a popular choice. And the weather looked promising too, with plenty of sun It’s a good track that takes you down near to the ruined lodge, where a relatively new bypass path took me through a short wooded section, where the “old” path was rejoined just prior to a bridge crossing the Abhainn Cuileig. It seems they are in the process of renovating the ruined building with the intention of turning it into a couple of holiday lets. Certainly a nice position there on the lochside. Boathouse on Loch a Bhraoin

At this point, the path continued and I would have picked up a feint path onto Leitir Fhearna (had I stayed on it

Don’t ask me why, but I decided to jump off the path I should have stayed on and headed off instead for broad grassy rake up the side of the hill, which I had decided was going to be easier going than the suggested route with a path (however faint if might have been) 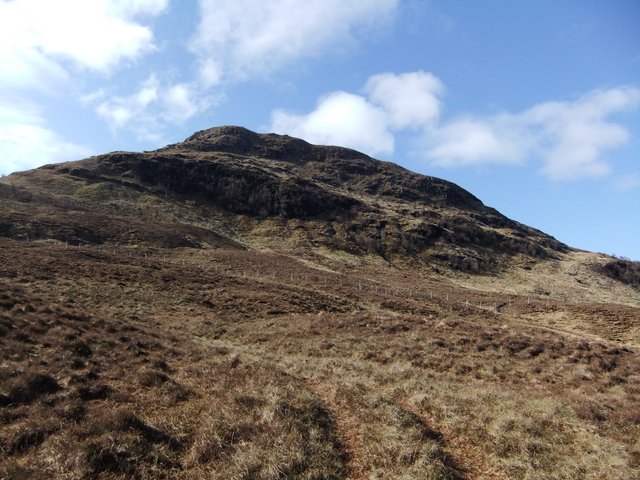 The "rush of blood to the head" route A nice view back though The grassy rake closer up

And I was headed toward a deer fence as well, that I was going to have to deal with, with no visible means of getting over it from what I could see

Despite all this I was convinced I was being clever, so carried on regardless

Thankfully though I spied a style over the fence, so that was sorted. Of course, I then had to consider how I was going to get over the fence at the other side

Luckily that didn’t turn out too bad in the end, as there was a natural gap as I arrived at the other end of the plantation which enabled me to drop down and over the far side without any problems

So far my “gamble” seemed to have worked, but then as I was continuing my rising traverse I realised I was probably a little lower than I had hoped and I still had some height to gain in order to get me onto the ridge of Druim Reidh. I had contemplated continuing on the line I was already on and having a shorter climb up to the Loch Toll an Lochain and then up onto the bealach toll an lochain. Not knowing the topography and what I might “discover” if I attempted this I decided against this and so had to endure a bit of a slog up onto the ridge

On arriving on the ridge I soon acquainted myself with the path and the going became much easier. I noticed a figure some way behind me, which I was to discover later on was the chap I had been talking too at the start of the day. We’d set off at about the same time, so it looked like my “gamble” had paid off after all as I was quite a way ahead, much to my surprise (and his) when we did eventually meet up again a little later on

I thought I’d taken too long slogging along my alternative route and was going to be miles behind everybody, but apparently not

Hitting the ridge and the path was a good one, which I could see snaking ahead of me in the snow. I was also getting good views of the first hill of the day - A’ Chailleach as well as a sneaky preview of the second hill - Sgurr Breac. The path ahead eventually gave me two options. One seemed to involve a continuing rise near to the minor top of Toman Coinnich, while the second option appeared to contour round at a fairly level height, with perhaps a final short ascent at the head of the coire onto bealach toll an lochain and the final push to the summit. Being a lazy b****r I chose the second option. Not a bad choice as it turned out

The path did actually drop down quite a bit more than I had expected at one stage and in the snow and boulders I managed to lose it eventually. But the direction of travel was easy to follow, as I carefully picked my way through the snow and boulders toward bealach toll an lochain, picking up traces of path here and there along the way. Once on the bealach it was a straightforward push up to the summit. A bit chilly by this point, but an opportunity to enjoy time soaking up the views and giving myself a chance for a bite to eat. The other walker turned up a little while after me, surprised that I had managed to somehow get well ahead of him

He set off soon after down from the top to find a bit of shelter for his break, while I stayed on the top a while longer enjoying a bit of a longer stop than I might naturally take 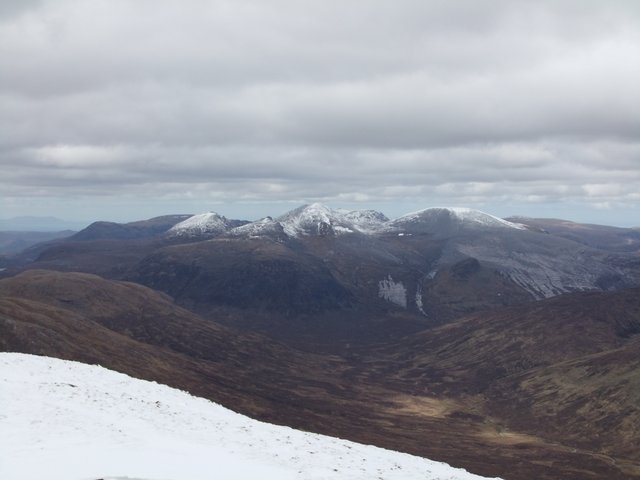 Toward Sgurr Breac from A’ Chailleach

Eventually though it was time to set off again and I was soon down at the bealach, searching out a reasonable line up and over the hump of Toman Coinnich and then on to the second Munro of the day. An easy little detour, even though from the bealach it seemed a lot more imposing.

Down the other side and it was a straightforward push to the second summit on this trip. Easy enough, but the legs felt it all the same

Met a group of 4 coming down off the hill as I was headed up (doing my trip in reverse). View back to A’ Chailleach As seems to be the case with all these hills, the views seemed pretty good all round

Particularly across to Fionn Bheinn and Sgurr nan Clach Geala Early view of the route back Didn’t hang around too long on the top and was soon headed off toward the col with the three other Fannaichs on my hit list and the walk back to the car.

On occasion I walked with the chap I had been speaking to earlier, although he was happy to go at a slower pace than me once down on the relative flat of the path back to the car. Overall the descent off Sgurr Breac was ok, with a few nice steep sections lower down. I was glad to have knocked the idea of attempting the five on the head, that’s for sure. I’ll be back for these three some time soon I hope

Leaving those three behind I was instead enjoying a nice march back to the car, admiring the water features along the way, as is my want A nice tumbling bit of water

Once back at the car it was then a short drive to Ullapool in search of a campsite. Plumped for Broomfield Holiday Park on the shores of Loch Broom. A nice, functional, but un-fancy site that I’ll definitely be returning to again

But this was only my second attempt You're fair racking them up pete,another good one

Nice one PeteR, and camping too into into the bargin! Campsites can be a great base for your adventures, cannae wait to kick off our camping in 2012

I've still one report to do from that weekend. Hopefully it will help your thinking

Bod wrote:Nice one PeteR, and camping too into into the bargin! Campsites can be a great base for your adventures, cannae wait to kick off our camping in 2012

Cheers Bod. I feel like a man in a sort of mid life crisis taking up camping at my age, but it seems such a great way to get out and see so much more

And basically I'm still a little kid at heart

The aim is to wild camp eventually, but this trip showed me I still have a way to go to refine my pack before I'm ready for that