A perfect Mayday in Torridon.

A perfect Mayday in Torridon.


I have long wanted to traverse Baosbheinn and Beinn an Eoin in the Flowerdale Forest, seen from Beinn Eighe years ago they looked tempting. A good weather forecast for Wester Ross promised an opportunity om 1st May.
With my present pace I knew it might be a long day so by 8:30 I was parking at what my old SMC guide calls the “blue barn” on the A832 near Gairloch. Today it is undoubtably a green shed.
A jeep track runs 6 km SE from there towards Beinn an Eoin. A notice at the start of the track warned that the footbridge near Loch Bad an Scalaig no longer existed. My plan was modified to traverse Beinn an Eoin first, in a N to S direction, returning over Baosbheinn choosing the easiest way down from there to the track. In less than 2 hours I was at the “Stepping stones” over the Garbh Choire river. After several dry days they presented no problem today. A little further on I left the track at a small cairn and traversed SE looking for the easiest way onto the ridge of Beinn an Eoin.
All day I saw very little sign of man-made paths and it was the same here, but I found a way round to the left that involved very little scrambling. By 11:30 I was on the northern end of the broad ridge which gave plenty of photo opportunities including a snow capped An Teallach in the distance, A distant view of An Teallach The undulating broad ridge runs south for over 2 km View back down the ridge

before rising steeply to the 855m summit of Beinn an Eoin whch I reached at 12:30. Up to Beinn an Eoin summit

. The weather was cloudless sunshine with good visiblity and a slight breeze keeping the temperature down. I now had a perfect view of most of the Torridon Hills, from Beinn a'Chearcaill, Beinn Eighe, Beinn Dearg, Beinn Alligin. Only Liathach was partly obscured. 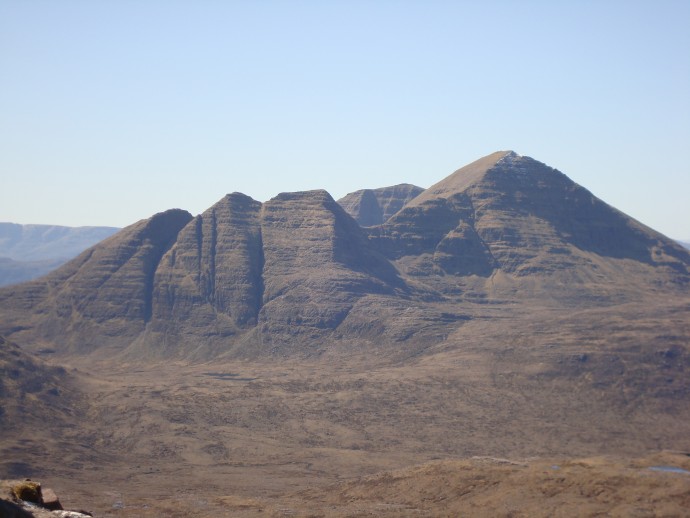 Torridon hills from Beinn an Eoin I had hoped to shorten the distances by descending somewhat south westerly towards the Poca Buidhe bothy. However this proved tricky involving zigzagging back and forth looking for a route through the rock buttresses. Being on my own with no one else on the hill I didn't want get into any difficulty. Eventually I traversed round to the true line of the south ridge and found that more amenable. This all took time and it was nearly 3pm before I reached the head of the loch. Descent from Beinn an Eoin

I was now in the secluded basin in the heart of the Torridon hills. I had originally thought to camp/bivouac here overnight but the forecast suggested overnight lows of -5deg. and my light summer sleeping bag would be in-adequate. However having arrived at this place I regretted my change of plan. I now had to return over Baosbheinn so made a rather tired ascent over Ceann Beag took me eventually to the Sgorr Dubh top of Baosbheinn at 6pm. A final round of panoramic photos were needed before I looked for a way off. A short descent to the N gave access to a NE ridge which initially descended at an easy angle with signs of a path. Lower down the ridge steepened and I had to move left to easier ground which brought me to the floor of the corrie. I had not been looking forward to this flat ground, expecting peat hags and deep heather. Instead there was short dry grass and small stones which allowed rapid progress to rejoin the track at the stepping stones by 7pm.
This left only the long walk on the track back to the car as shadows lengthened.
A perfect day - total sunshine, no midges and the hills to myself - but I was TIRED next day.

Re: A perfect Mayday in Torridon.

Re: A perfect Mayday in Torridon.

Last time i was in Torridon it battered doon and I couldnae see zilch!