Well, where do you begin with your first report, especially when you're a novice to the hills and at 'the writing!' Me and Jaf had set the 22nd as the date for my next induction to the hills, having done the "Glenlyon 4" and Ben Chonzie earlier this year. Jaf, a 50+ Munro man, had been itching to do this pair for some time, but as you can see from my previous, this was another league altogether for me! Fortunately, the weather looked good when we left 'the Gilp' and improved as we neared Glen Orchy, then drove up to the farm car park at Achaladair.
My first impression - 'these hills look high! Can I really make it?' "No worries," said Jaf, but what else would he say? 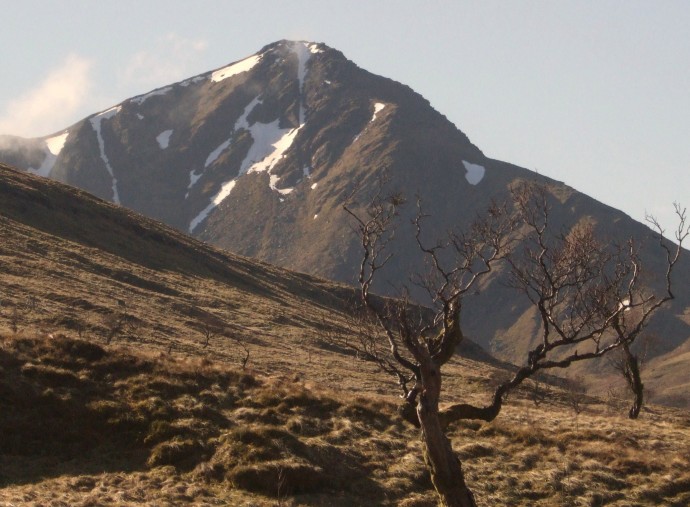 We were soon kitted out and heading along the track towards the river. We had decided on the clockwise option on the basis of getting the better views and I'd suggest this was the case.
We soon found out that the river can be a bit tricky to cross without getting ones feet wet, but managed it, just. We then followed the Water of Tulla up the glen, having an occasional glance through the Crannach woods, wondering on the wisdom of a shortcut, but we decided to stick with the track, past the ruins of Barravourich farm, then on to the wooden bridge and back over the river. Footbridge over Tulla into Crannoch Woods

We probably made things a bit harder for ourselves here, by heading a bit further to the south than we ought. The path isn't too clear, so we then had to follow the railway line further northwards to the tunnel under the line, by the Allt Coire an Lochan burn. Precious energy wasted, but not too much. The Jaf, heading up from Crannach Wood

From here it was pretty much a case of following the burn up the hill, enjoying an occasional breather and the views. It was a bit boggy in parts, but not too bad, even for my basic boots. There are several styles over deer fences, but we avoided them, which seemed to work out ok. As we got higher, there loomed before us, a very large, dark, wall of imposing rock and we knew we would have to divert at some point, to climb the steep eastern side of Coire an Lochan to head for the summit. I don't know if we missed an obvious path, but we were happy to keep following the burn as far as it went. We were even happier, when we reached the lochan, which seemed to almost draw us in, with the high sides all around and crystal clear water, taking one' breath away. Serenity and a chance to marvel at our surroundings! Had we went no further my day was made. A few photo's of our sweaty, very red face's were taken, before trying to decide our next move, which was to head directly east and tackle the slope, which would lead us to the ridge to the summit of Beinn a'Chreachan. It was a bit stony and steep, but we soon swallowed it up, to gain further beautiful views overlooking the corry, Rannoch Moor and the clear blue sky beyond. 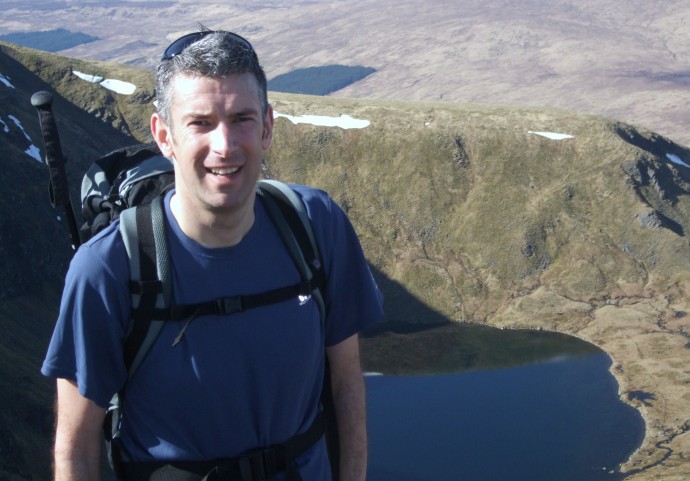 Stunning and not for the first time that day, Charles (better give him his formal name at least once), reminded me of the few days like this, he had ever had the luck to enjoy in the hills. Anyway, pressing on, the path up to the summit was quite clear and I'm sure of little distraction to most who have gone before, though more than a bit exciting to me, but it didn't take much longer till we were at the cairn on the summit. What a vista we had from there and in perfect sunshine too. Jaffa pointed out a hundred and one mountains and different ranges. I can remember Ben Nevis. I'm getting old. Charles at the summit of Beinn a'Chreachan.

Old, maybe, but not too old for a bit of fun and still sweating profusely, decided it was hot enough for a bit of topless posing, for a laugh. Remember the date, March 22nd and sunbathing, for all of, oh, about 30 seconds on the top of Beinn a'Chreachan, before common sense and frozen nipples dictated that all clothes be most hastily put back on! One for the lady 'genarians' - (Octogenarians!)

I think it was just about 6 miles and three hours to the top. From there we headed west, down the steep slope without much trouble and joined a well defined path on the way to Beinn Achaladair, though we headed further up the slope to give us clearer views out to the north and passed by a few others heading the opposite way. Charles and Beinn Achaladair behind

After a bit of a scramble, (easy said, Jaf) we were soon on the summit of Beinn Achaladair. It has a nice ring to it, doesn't it and even more spectacular views round 360 degrees. Well worth taking the camera, especially looking down on Loch Tulla. It was about 4 and three quarter hours to this point, I think. We wisely decided not to make for Beinn Mhanach, the legs definitely beginning to show signs of tiredness and so, followed the track southwards, along the ridge and down into Coire Achaladair. The route down here is much less well defined, quite rough and boggy in places. Especially those places I was placing my feet, for I soon managed to slide on my backside about 4 times! Ah well, pride and bum dented, but as per the title, I felt I had found my feet on Beinn a'Chreachan and Beinn Achaladair!
Before long (??), about 6 and a half hours and nearly 14 miles later, we were getting the kit off again, back at the car, but no more topless posing, don't worry. Just thrilled with a great day, in a great place, before hitting the road home and a wee pint, or two in 'the George,' to go over it all, again and again.
Hope my story doesn't turn out to wonky! Thank you for kind comments, your Monarchy.