Hewitts included on this walk: Grey Friar, Swirl How

our_route.gpx Open full screen  NB: Walkhighlands is not responsible for the accuracy of gpx files in users posts
The Coniston Fells have been pretty much ignored during our time in the Lakes, so, with the weather allegedly better in the South, that's where we headed. Parked at Stangs in Little Langdale, near the ford, to make a different ascent of the Conistons, going up Swirl How direct. We popped in to Cathedral Cave, a well known local spot. Quite impressive it is too From here, we headed into Greenburn, intending on going direct up Broad Slack to Swirl How. Fortunately for us, the weather forecasts were spot on and it was really warming up as we headed further up Greenburn. We followed the beck up and began the ascent of Broad Slack, intending on checking out the plane debris that lays there. We found the debris about 2/3rds of the way up, though there isn't much left of it now. We crossed Broad slack and scrambled up the face of Swirl How, which was fairly easy going. It was quite hazy now, looking over to Coniston Water & the Old Man. 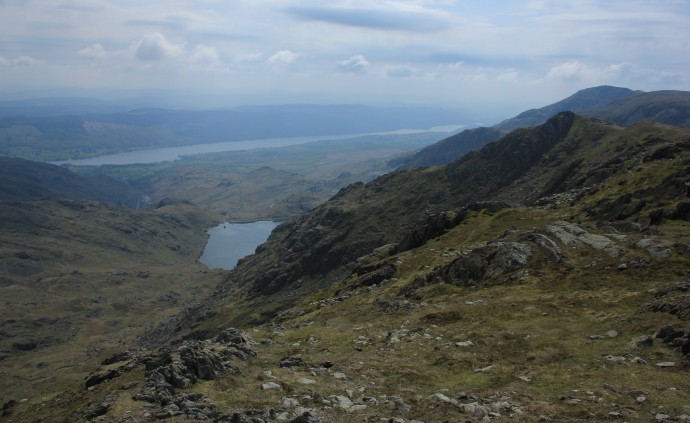 Coniston & Levers Waters with the Old Man & Brim Fell to the right.

We decided to check out the memorial to the airmen lost in the crash, before heading over to Grey Friar. We stopped on Fairfield, between Great Carrs and Grey Friar for lunch as it was really warm now, though on the ridges was the usual breeze After topping Grey Friar we had a look for the "Matterhorn" rock. A very small mirror image of the real thing it is too Back across to Great Carrs Unfortunately, the haze seemed to be enveloping the surrounding area, or the views from this route would have been brilliant

We made our way easily back down to the footpath and headed back to the car. Little Langdale Tarn on the walk back.

That looks an interesting and different way up,

Lovely stuff Mamoset, what a great day you picked for this cracking hike, the photo of Matterhorn rock is cool....you should take an action man if you ever go there again and get shots of him scaling it

Thanks all, and ChrisW, that's not a bad idea hahaha