Finally, a decent weekend day and a chance to head for the Lakes for a beautiful (but quite gruelling - months of tramping round the Dales and Peak does rather make you forget what a steep climb feels like) circuit of Grasmoor and its neighbouring fells.

grasmoor.gpx Open full screen  NB: Walkhighlands is not responsible for the accuracy of gpx files in users posts
From Lanthwaite Green, the climb up to Whiteside makes for a fierce and relentless start to the day – there’s a clear path all the way, but a very stony and steep one bordering on a scramble in places and gaining an awful lot of height in the first mile or so. The summit ridge climbing to Hopegill Head, interestingly rocky and close to the precipitous south face in places, seems a leg-easing stroll after that – the next objective of Grasmoor looking a vast craggy lump from this side in comparison with the finer rocky ridges of the Grisedale Pike circuit close to the east. 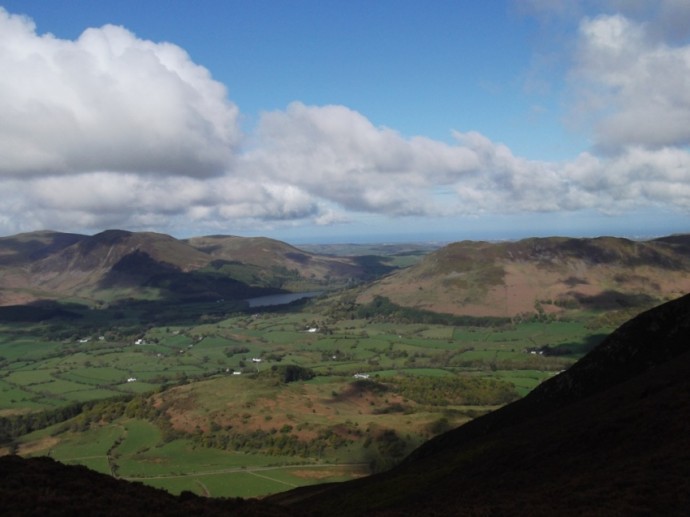 Loweswater Fells from ascent of Whiteside 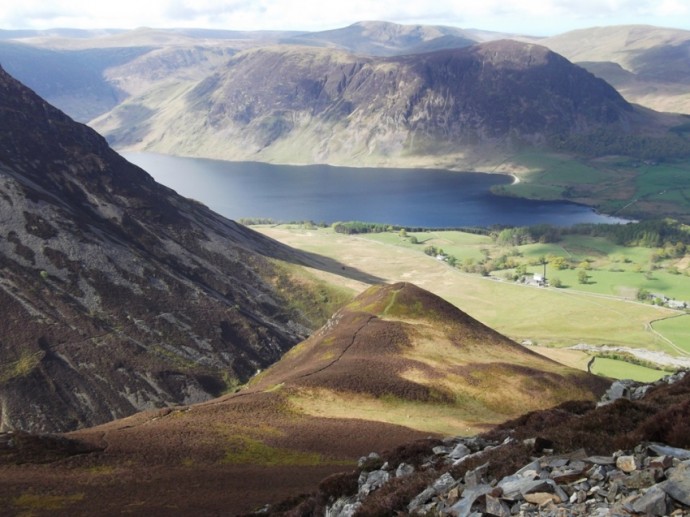 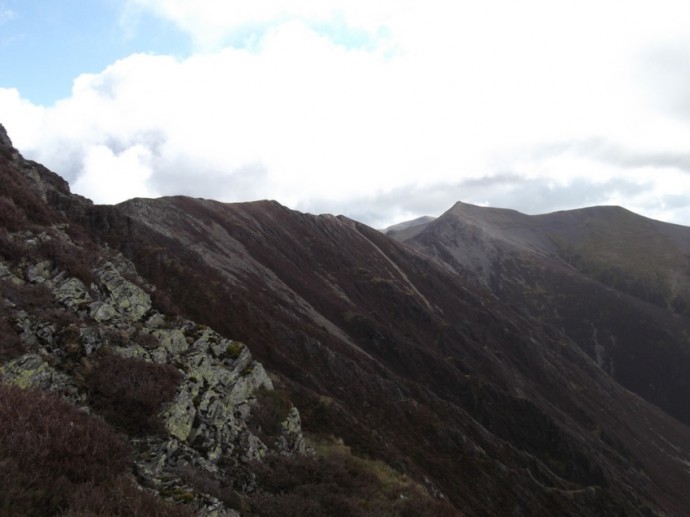 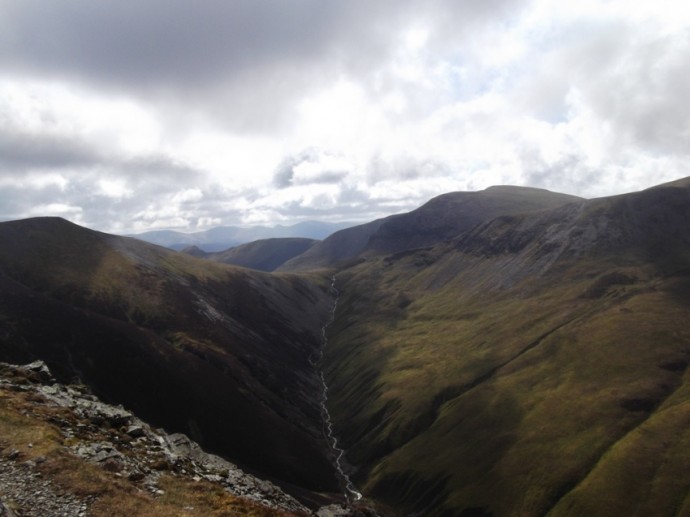 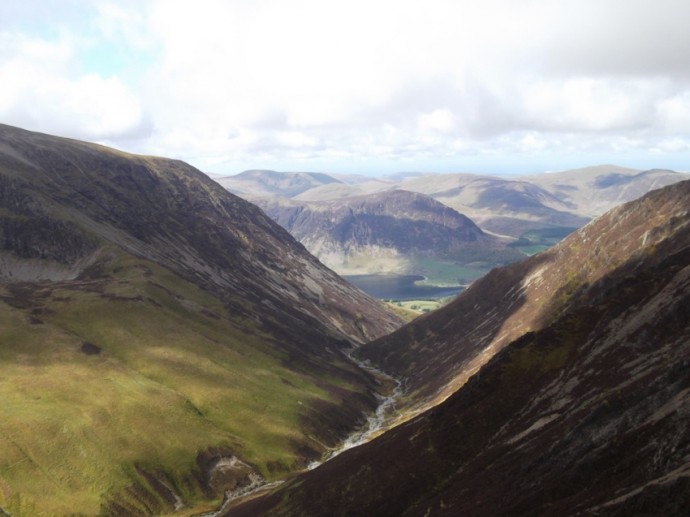 North over Ladyside Pike to Whinlatter After an easy descent to the head of the falls in Gasgale Gill, there’s a gentle path around the edge of Dove Crags up to Grasmoor – a broad grassy plain of a summit that seems amazingly friendly from this side once you’ve seen its other three daunting faces. From here, you get the first of several great views over Buttermere and its surrounding fells to the giants of the Lakes to the south. Over Coledale to the northern fells South over lakeland from Grasmoor Over Loweswater to the coast from Grasmoor

It seems quite a long flat way across to Wandope, a rather forgettable damp little rise enlivened by its eastern cliffs, before the way narrows along the edge to Whiteless Pike – another enticing rocky ridge, but with the wind starting to whip across, one to hurry on through. Very steeply down from there, with some gratitude for the stone steps cut into the path, through sudden crowds (almost no-one to be seen on the preceding fells, but plenty puffing their way up Whiteless Pike with varying expressions of apparent regret!) to the head of Rannerdale. 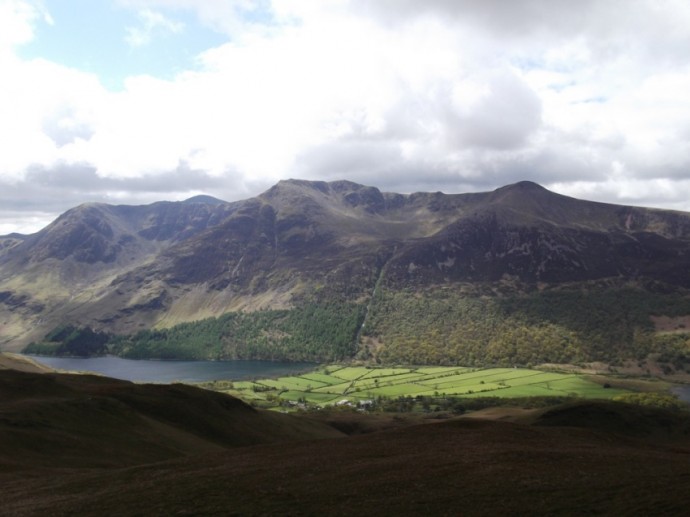 The grassy path heading up Low Bank to Rannerdale Knotts looks irresistible from there and the mile or so along the ridge is indeed terrific, undulations over grass and little rock summits with stunning views south. Over Buttermere to Fleetwith Pike, etc Given that, and the thought of this as a little ‘family’ hill so close to the roads, I’d rather expected something as good dropping west to the carpark. It’s not. Much the worst path of the day, in fact, eroded into a morass in places, painstakingly steep and slippery in others, and very little fun at all. It’s a couple of miles back up the road to Lanthwaite from there, but short extensions onto the bordering footpaths (into Rannerdale to enjoy the blanket of bluebells, then down along a well-made lakeshore path) are well worth the effort, with a final view of Grasmoor’s daunting west face that gives you a little (slightly unjustified!) puff of pride to have made it up there… An idea of the angle of descent to Crummock Water... Through the bluebell fields in Rannerdale Beautiful pics of a great hike P, looks like the weather has taken a turn for the better while I've been entertaining my family (last two weeks) glad to see it. Your comment "with varying expressions of apparent regret" made me laugh..................that could be applied to me at some point during every hike I undertake

Yet to do any of those fells. Consider my appetite wetted

Nice one Poppy with some nice pics there..What a beautiful place Rannerdale is at Bluebell time