Circumstances meant we were going to have to start late on Sunday and Neil wanted to get back for 7, so we discussed a couple of options that shouldn't take too long.

I suggested a loop from Llanberis; up the Llanberis path to the finger-post then down the Ranger Path to the bwlch at the shoulder of Moel Cynghorion then following the route of the Moel Eilio fell race in reverse. Although I'd done this loop many times I couldn't quite remember how long it usually took and I suggested to Neil that we should do it in 4 hours, so it was agreed we would do this.

Starting off from Llanberis at 13.20 it was clear that it was going to be windy when we got high, but it was still fairly mild and I started off in short-sleeved t-shirt. In order to get warm (and to ensure that we got a good work-out from the walk) I set off at a brisk pace.

We hardly spoke a word as we drove on into the wind up to halfway station, at this point I made a concession and put my gloves on, but didn't want to stop to get my jacket out and so pressed on. Once under the bridge and labouring up Cloggy the wind was getting quite fierce and it was trying to rain. I was drawing a few odd glances due to my scant clothing, although there were people coming down in shorts. My arms were a bright pink due to the cold until near the finger post I eventually gave in to common sense and donned a long-sleeved top. neil also took the opportunity to drop down the first few feet of the zig-zags to find some shelter from the wind to put on an extra layer- we arrived here at 14.40. 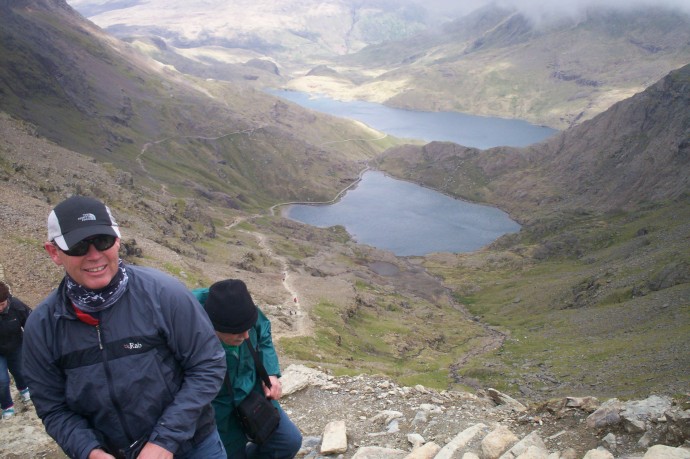 Neil at the top of the zig-zags (Miner's track)

Although we were only a few minutes below the summit of Snowdon our route did not call for us to go to the top - instead we effectively turn back on ourselves at the finger-post dropping downhill towards the railway track.

Crossing this we pick up the Ranger path that descends above the cliffs of Clogwen Du'r Arddu. At the bwlch we then headed up the short climb to Moel Cynhorion (this always brings back memories of being totally exhausted and needing to cling to the fence as i climbed this section on the Peris Horseshoe fell race).

No need to cling on this time and we were fairly sheltered from the wind until we reached the broad grassy summit.

From here we followed the route of the Moel Eilio fell race in reverse, jogging down the long steady descent before the short climb up Foel Goch. It was about two minutes into this climb that I 'bonked'; and was now regretting not having any lunch and not bringng any food with me.

At the top I scrounged a cereal bar from Neil, but I had gone passed empty and I think he knew it and took his turn to put the pedal to the metal. I struggled up Foel Gron after him and then stumbled up Moel Eilio like a drunk. The wind wasn't helping as this was now blowing us sideways and with legs like papier-mache I was in no condition to fight it.

Was I glad to see the top of Moel Eilio and the very substantial summit shelter - I collapsed inside and could have dropped off to sleep; however, the time was now 16.10 and we would have to make tracks to get back to the car in under four hours (like it really matters!).

So time for a couple of summit photos - firstly me trying not to look as shattered as I was. We jogged down and eventually reached a minor road that leads to the village (right near Pete's Eats), but we had parked at the other end of Llanberis so set off on an unfamiliar and not very clear footpath. After several false turns we eventiually made it back to the car at 17.05 - dead beat.

It had taken 3 and 3/4 hours of hard work and Neil asked where I had got the 4 hour estimate from. I admitted it was a guess and was not surprised to see that the Naismith prediction for the route was 6 hours and 6 minutes

With only 3 weeks until our north of Scotland odyssey I think we need to get some more hills in our legs.

Dave, No food, no idea of time but best of all no photo of all my chins. I thank you. Neil

Great report S7 - though never seen the attarction of running around mountains (probabaly because i can't!!)...and I think you should post the shelter photo myself!!