To make up for the absence of dogs on Ben Vorlich I thought I should post a walk we did in the Arrochar Alps when we did have the mutts with us.

Both our dogs are from Labrador Rescue. Jack came to us from Ireland where we reckon he'd been left to his own devices so his hunting skills were well developed but he couldn't walk on a lead.

At one point I doubted I'd ever be able to take him on the hills without him taking off.

But we got there gradually and on the day we climbed Beinn Narnain he did brilliantly.

We drove from Comrie to Arrochar on a morning that didn't look promising.

Morning mist over the still waters of Loch Long Moira on the zig zag path Cloud on the Cobbler Jack the lad was so exhilerated with all the smells of the hill it was pure torture for him to sit still to have his photo taken - but he did it! Admittedly not for as long as Tess sat - but then she's a girl! We walked up the excellent path to the bealach between Narnain and the Cobbler, passing the Narnain boulders on the way. At the bealach we followed the path up the back of Narnain. 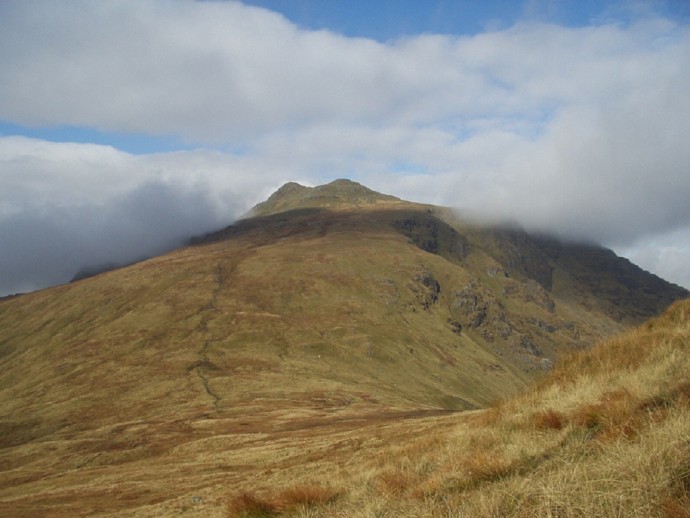 A glimpse of Loch Long I was encouraged by the progress in Jack's behaviour on this walk. There were no sheep about so he was off lead, stayed close and came to the whistle every time.

Never say never. This lovable hooligan is learning how to behave! Loch Long from top of Narnain We retraced our steps on the return and got clear views of the Cobbler on the way down. Arrochar in the afternoon sun Tess has a thing for plastic bottles and was just as keen to retrieve from the loch after the climb as she was before! I hope this report goes some way to make up for the woeful lack of dogs in my Ben Vorlich report.

much better with doggie pictures. And all the other pictures too of course!

love to see photos of your dogs, they always look so happy on the hills

nice report and another great walk

Do you want to train mine for me? I think they need it

Strange there were no sheep, have always seen a few dotted about at any time of year.

I'm wondering if Jack's hill days are numbered, even though he's only 7. He's on supplements for his joints. Mind you so am I and that's not stopping me. It's just that I know what my pain levels are so can make that decision but the mutt can't tell me how bad his pain is!

love to see photos of your dogs, they always look so happy on the hills

They love it Morag - which is why it's hard for me to know the right thing to do about Jack.

soulminer wrote:Do you want to train mine for me? I think they need it

Strange there were no sheep, have always seen a few dotted about at any time of year.

I can know without seeing them those collies are well trained!

It must have been our lucky day with no sheep about. There were certainly sheep the day we climbed Ime and bonny black faced lambs on the walk in to Vorlich. I guess they've got so far to roam they can take themselves off wherever it takes their fancy.

Great pics of hills and dogs.

Does your dog have a thing for Lucozade?

Does your dog have a thing for Lucozade?

Yep - needs it for all the energy she expends on her manic retrieving!