It has been over a fortnight since my last proper walk and I had been itching to get out into the hills again. I have a mate who is currently working in Hawick and the chance of a lift from Moffat to St.Mary's loch was one I was not to turn down even though it meant I had to get up at 5:15am!

However I did manage to get up and make a little packed lunch. I'm really not a morning person but I have to say it was quite a fresh morning and the combination of good weather and the good walk ahead had a smile on my face. The journey was a swift one even if Melvs driving was a tad scary on the narrow winding A708.

We arrived at the loch side at half six and I said my goodbyes and thanked Melv for the swift lift.
After hoisting my pack onto my back I set off up the track to Kirkstead farm and the track I was to follow to the foot of Black Law. The path was good and a frost made good any wet patches. A covering of hailstones were lying. The sun was not yet warm but I was moving quickly enough to get away with a base layer and shirt. The birds were singing and being up in the 'am' didn't seem so bad.

I made good progress along the track and Black Law was not long in appearing around a corner of the long valley in. As I reached the foot of Black Law I came to realise maybe why it had its name. It was a great mass of heather covered hill with no obvious route up from the south.

Bother. Anyhow, I set off plodding through the deep heather aiming for a fence I could see with lovely grass on the far side. Trudging through the tangled heather was made worse by the soft moss below. If your doing Black Law this is not the best way! The only thing that made it easier was the views opening up behind me of a hail covered Lochcraig Head. 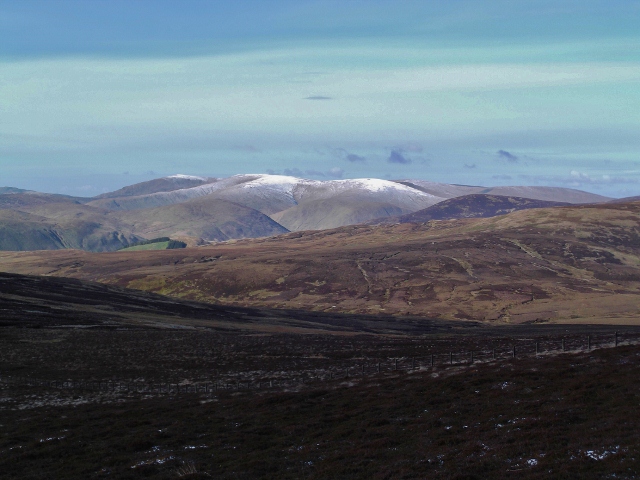 It took me just under two hours to walk 6km on the track and reach the summit of Black Law. I rested briefly before heading along the fenceline towards the second donald of the morning, Greenside Law. By my reckoning with green in its name it must be covered in grass I thought. I was right and I sped to it and over it and didn't stop til I was well past it. Looking back at Greenside Law

After a short lunch stop on the way up Notman Law I began again refreshed and determined not to drop the pace. I took another look back behind me put my head down and marched on Dollar Law. 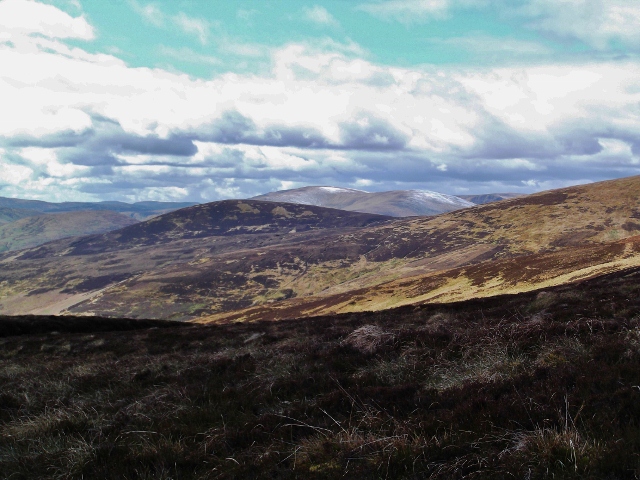 Lochcraig Head again and the long flank of Cramalt Craig

It wasn't long before I had reached Dollar Law and I took a little time to admire the views. 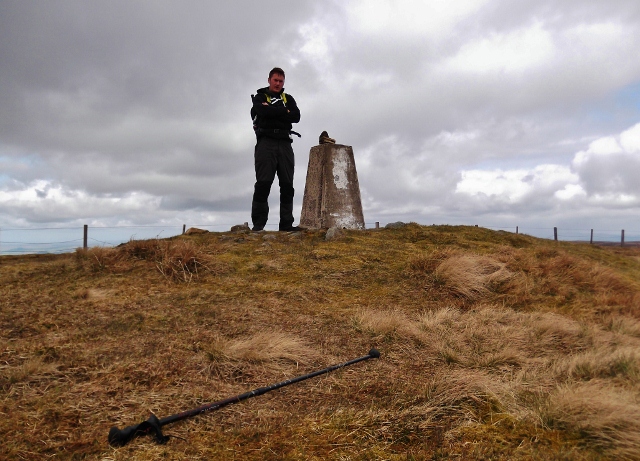 Culter fell and Tinto peeking up?

It was just after 11am and I still felt full of energy so I about turned and set my sights on Cramalt Craig. The deleted corbett looked none too bothered about me or the fact there wasn't enough of a drop between it and Broad Law. For it still stands at 831m and by any account is a formidable hill. Broad Law and its radio mast and radar station.

Still I marched on and covered the groung between Dollar Law and Cramalt Craig in 45mins. I took a short stop to grab a trig shot and headed down the long grassy flank towards a track and a route to my pick up point by Megget reservior. I covered the planned walk in 5 and a half hours but ended up getting a little fed up waiting on my lift home and walked along the bank of the reservior for a few more km. I'm sure it must have been good for my legs as although I still had an evening shift to do my legs felt brand new even if I was nearly nodding off behind my desk! Walking 23km, working a five hour shift whilst being awake for 18hrs after getting about 3hrs sleep may not be good for your health but I enjoyed my day anyway. 4 more donalds bagged!

Next outing should be Ben Lomond


our_route.gpx Open full screen  NB: Walkhighlands is not responsible for the accuracy of gpx files in users posts
My route was from Kirkstead farm following the track to Black Law although in hindsight I would probably look for a heather free route onto Deer Law and follow the ridge on better ground onto Black Law. The rest of the route was on good ground or tracks.

Re: One Dollar and a bag of Donalds

Thanks for your route and GPS file. Did the walk today in reverse, re-jigged your route and came down from Black Law via Deer Law, walk along road back to car not as long that way