more Cuillin sun and the In Pinn, oh yes indeed!

more Cuillin sun and the In Pinn, oh yes indeed!


So here we are on day three of our Cuillin adventure and as we drove the short distance from the campsite to the BMC hut the rain started in earnest. So full waterproofs and we set off up the path to Coire Lagan feeling quite sad. Not far up we met three lads coming down who had decided to call it a day, and at that moment it looked like the rain was set in for the day.
But we were wrong!! by the time we reached Eas Mhor it was definitely clearing a little, and had stopped by the time we reached Loch an Fhir-Bhallaich. Eas Mhor. Not too much water in it, you can see that there has been a dry spell in Skye. here's a picture of the same waterfall taken in July 1985 after a period of rain. this was the last time we were in Skye and it was probably the best view we got all week. So glad I came back! 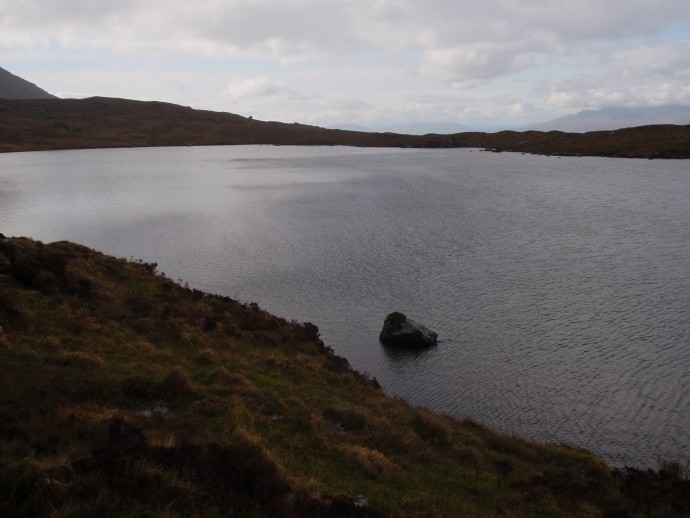 and by the time we were climbing up the side of Coire Lagan it was turning into a splendid day. Sgurr MhicChoinnich, our first target for the day, with the cloud base just bumping around it 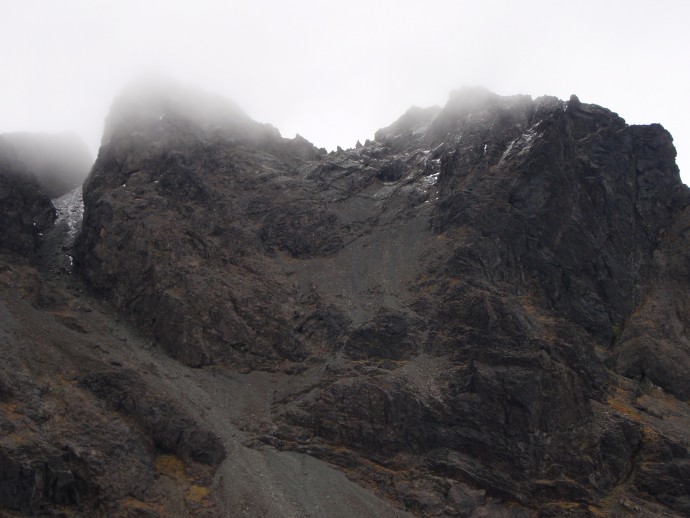 We avoided ascending via the An Stac screes which looked steep and difficult. we watched some others coming up painfully slowly. Instead we took a route to the left of the screes and ascended along the top, using the cliff wall as a handrail for greater stability. Looking down into Coire Lagan. the wee circles you can see are stone bivi shelters built by climbers for staying overnight.

Eventually we got to the ridge and saw where we were heading. Gulp! Looking towards Sgurr MhicChoinnich, you can see the snow in the great stone chute peeking out the cloud on the right

We went a bit further along the ridge, which was really quite nice and wide hereabouts. we found a good place to have a quick bite to eat and leave the bags while we went to the summit and back. From this point we could see over to Sgurr Dearg and An Stac but the In Pinn was hiding behind An Stac. An Stac and Sgurr Dearg hiding the Inaccessible Pinnacle

pano looking north with Sgurr Dearg on the left

It was a pretty hard scramble and quite exposed in places to the top of Sgur MhicChoinnich from here. Unfortunately on the way up one of our party slipped going up a difficult section and bumped the back of her chest. she didnt fall very far at all, but it was a hard bump and she thought she had cracked a rib as she felt a sudden pain in the front of her chest. A stark reminder that there is always risk on the hills. She was very brave and kept going. 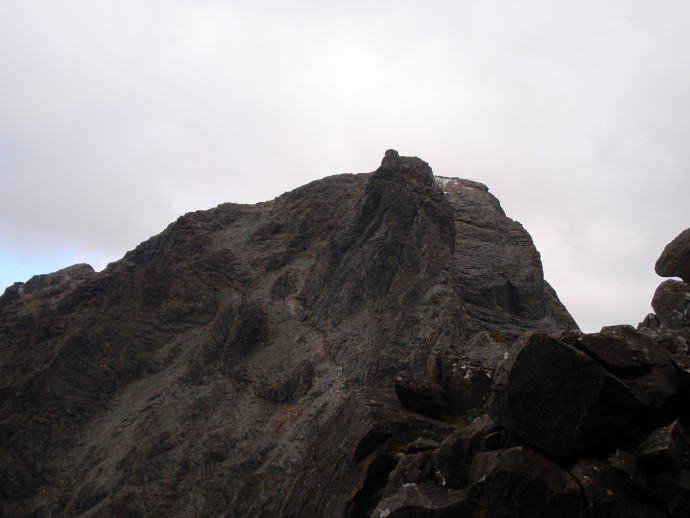 As we cimb, the Inaccessible Pinnacle appears behind an Stac, doesnt look all that big from here really and then the view to Sgurr Dubh Mor (Big Black Pointy thing) appears, where we were on Monday

we reached the very narrow summit shortly after 12 o'clock in pinn from the summit of MhicChoinnich, zoomed

then came back down for lunch.
when we reached our bags we had a bit of a surprise! one of the zipped mesh pockets on the waist strap of my rucksack was opened, and my chocolate peanuts and trail mix were completely gone. my lipsalve was neatly placed on the ground. two other rucksacks had also been raided. It was the work of clever ravens who have learnt to open zips. mine are especially beak friendly with little circular tabs to help with gloved hands. Good reason to put your grub in a plastic box rather than a polybag.
So the next job was to get ourselves to the Inaccessible Pinnacle which we did by retracing our steps and then going up a steep section where it was just too steep to go without hands, but not quite steep enough to be comfortable. Approaching the bottom of the Pinnacle. It doesnt look quite so small now!

it was shortly before 3pm when we reached the top of Sgurr Dearg, where we would "camp" while Graham took us up the Pinnacle in two groups of three. 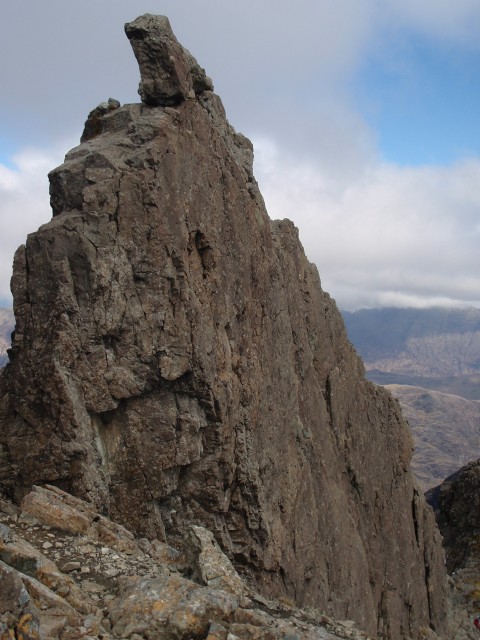 Here it is from the top of Sgurr Dearg. the early munroists were obviously kidding themselves saying it didnt count.

My husband, who has at last registered on WH and is henceforth known as Rudolph, was volunteered (by me) to go first as he was most nervous, and I went up with the second group.
By this time it was a lovely afternoon and the sun was out, with even some warmth in it. We had a second lunch and a brew up and took loads of photographs while we were waiting our turn. Here he is halfway up the second pitch.... ...and being lowered off. in the far distance, mull and Ben More just visible, in front of that Ardnamurchan, closer Eigg and Muck, then Soay and the far wall of Coire Lagan with the Cioch. me on the top. Wheeee! but I'm sure I didnt stick my bum out that much! Eeeh that were fun!

and as if that wasn't enough, while we were up there we saw two rainbows in distant showers, and some juvenile Golden Eagles circling.
sorry I dont have a photo of the eagles, you will just have to trust me on that one. my camera is not up to bird pictures. 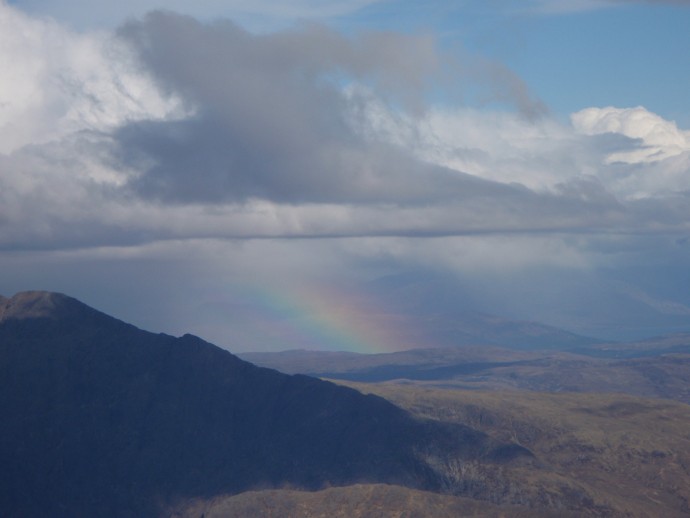 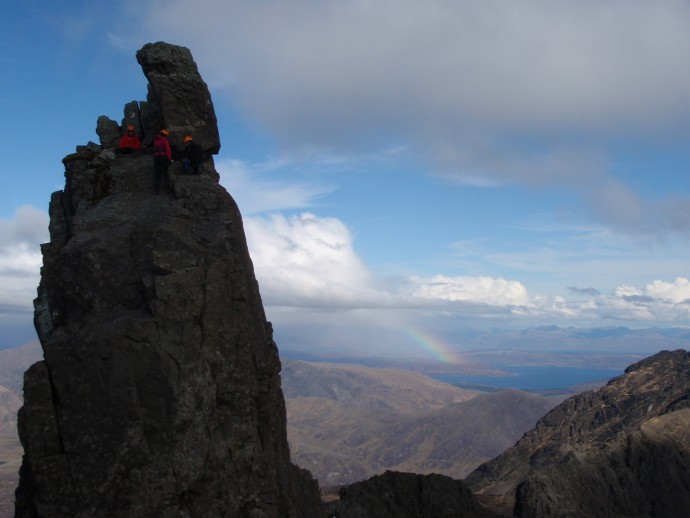 And then to cap it all, when we were all together again on the top iof Sgurr Dearg, someone pulled out a wee bottle of champagne and some plastic flutes, and we all toasted each other and had handshakes hugs and kisses all round!!
I've reached my max on pictures so I will stop here. We went straight down west from Sgurr Dearg back to the BMC hut and ready for a quick bowl of soup and bed. A fantastic day.

So now I will add our route map for what it's worth, and some pictures of the sunset that evening just to finish a perfect day.

in_pinn.gpx Open full screen  NB: Walkhighlands is not responsible for the accuracy of gpx files in users posts 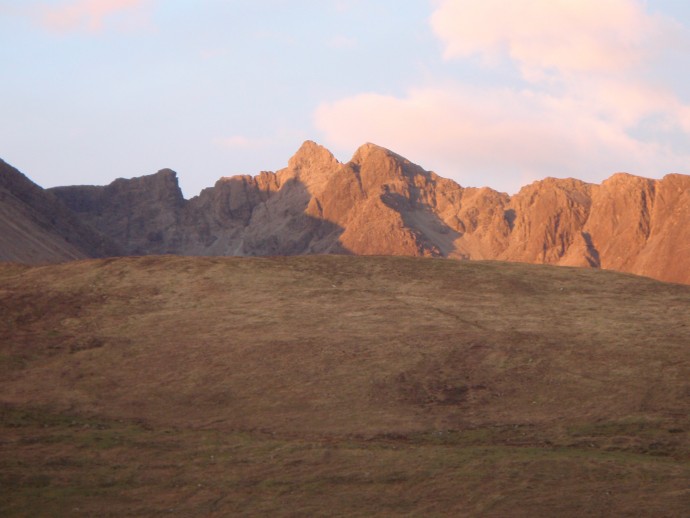 sun on the Cuillin from the campsite, with sgurr mhic Choinnich on the left 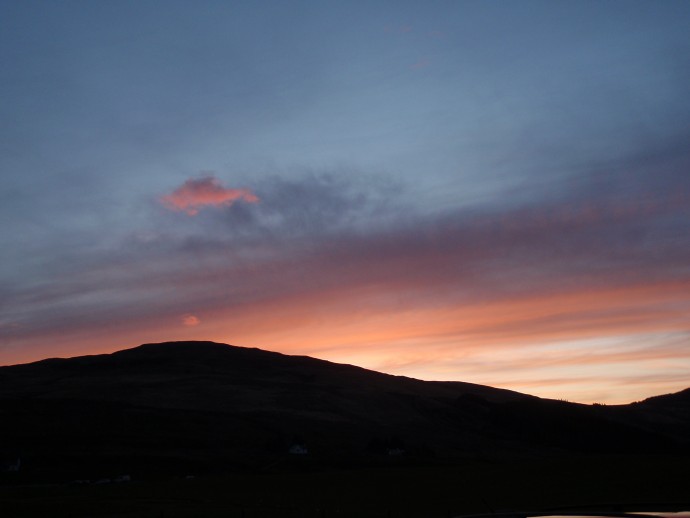 sunset from the tent.

What can I say but fantastic Mrs Santa, a great report and some lovely photos

Well done to Rudolph as well

This is something you wil remember the rest of your life

Outstanding mrssanta!Well done to you all! I climbed the Inn Pin a few years back and your pics bring back a few memories!

Been following your Skye reports, all being superb reports. I guess the In-Pinn is the big one though and puts you and Rudolph one giant step closer to Munro Compleation

Fantastic!! A momentous achievement by both you and Rudolph

Great looking at your photos as well

Fantastic stuff and congrats on begging this one under your belt

Well done!
I can recall when I did Sgurr Mhic Choinnich my guide constantly saying 'in the wet this is treacherous' due to the basalt rock underfoot - was that what did for your companion?

Well done to you both.

So glad that the group got the day it deserved.
Well done indeed, looked like a super day was had by all.

Wow wow wow... literally eveyrthing crossed that we get a day like this!

Looks amazing, and well done for looking so calm. I plan on carrying at least 2 spare pairs of pants...

Ranger wrote:Well done!
I can recall when I did Sgurr Mhic Choinnich my guide constantly saying 'in the wet this is treacherous' due to the basalt rock underfoot - was that what did for your companion?

No I don't think so, it was going up a wee chimney with a foot either side and either her foot slipped or she lost her balance.

ciderpeter wrote:Wow wow wow... literally eveyrthing crossed that we get a day like this!

Looks amazing, and well done for looking so calm. I plan on carrying at least 2 spare pairs of pants...

I think it's just how you are wired for heights. My husband was actually happier on the pinnacle than elsewhere because he was on a rope and felt safe. I just found the whole thing completely exhilarating.