Kevsbald hasn't been the only person to have been "visited" by the Munro Monster recently. I too have been wrestling with demons! Even last week in Provence, I would be sitting at a table in a pavement cafe bar quietly enjoying a "demi" of Stella Artois or a glass of the local "vin de pays" when I would feel his presence somewhere nearby. How did he find me here?

Anyway, Tuesday found me back home unpacked, washing done and my wife back at work. Only one thing for it then!

The weather didn't look like any great shakes but I reckoned there would at least be some colouful autumnal scenery out there to look at. And of course I could do with a stiff workout to counteract all that booze and typically provencal food, not to mention all the patisseries.

I quite fancied hitting another couple of Corbetts and Kinley's superb "White Hare White Now" report of a winter outing on Carn Liath popped out of the darker recesses of my Cotes du Rhone addled mind. Never mind white, it could be quite orange up there at this time of year. So, plan hatched - Corbetting in the Cairngorms on Carn Liath and Culardoch.

I momentarily felt a twinge of guilt as I ushered the still grounded on medical grounds Lucy into the kitchen and myself out the door. I don't know what dog for "You swine!" is but I'm sure that's what she was saying judging by the look on her face. She certainly knows the signs of an impending hill trip!

I set off at 9.20 up the well known A93 through Blairgowrie and up over the Cairnwell Pass before heading down through Braemar and pulling into the walkers carpark at Keiloch on the Invercauld estate. After paying the parking and seeing a man about a dog, it was off along the tarmac road towards Invercauld House. Time - 10.45am. From the car park

It's a fairly long walk along the drive towards Invercauld but the colours of the trees maintained the interest. Only slight niggle was that I kept wondering where Lucy had disappeared to.

I decided to continue on the drive past the Craig Leek track and the house to Altdourie before bearing north and then north east for about 1.5km before joining the main track north out towards the two Corbetts. 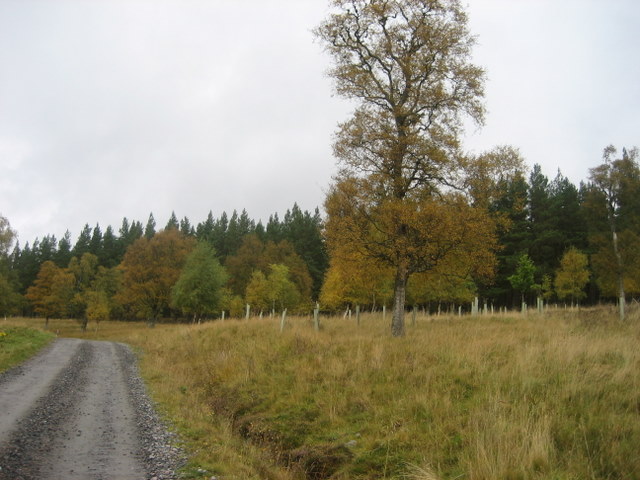 The track beyond Altdourie was positively hoaching with pheasants. I half expected to suddenly see Caberfeidh coming speeding along the track in his car trying to get some of them!

There had been the odd patch of blue showing all morning in an otherwise pretty uniformly grey sky, but it was pretty obvious by this stage of the day that it was going to struggle to make any more than a small breakthrough here and there and that grey would be the dominant colour of the day from the horizon upwards. The colours below that were far brighter and more varied and contrasted nicely with the leaden heavens. As I got further away from the houses I also started to get the noise of rutting stags rumbling around the hills around me and wondered how long it would be before I came across some stalkers. Just before the point where the Allt Cul cuts across the track, a Landrover was parked up and the driver was scanning the slopes of Creag a Chait with binoculars. I could see a few people moving about on the higher slopes as I approached the vehicle. The guy seemed a bit startled to see me, and looked for a second like he might not have appreciated my presence there, but he soon warmed up a bit after I asked him how the stalking was going and assured him that I had checked things with the Hillphones and would not be running around the hillsides like an escaped loony, not least because that magret de canard I'd had for lunch in Marseille on Friday was coming back to extract revenge in the form of unusually heavy legs.

Reminds me of the famous passage from an episode of Only Fools and Horse:

The climb up the track to the hut at 180981 is not that steep but it's still a fairly long haul (at least I felt it was). Just beyond the hut, a small cairn on the left marks the start of a path heading off round the northern flanks of Carn Liath. I decided to tackle Culardoch first so continued on the main track for another kilometre or so passing a weather station on the right before a less distinct track continues straight ahead onto Culardoch where the main track doglegs left. Branching off for a misty Culardoch Carn Liath from slopes of Culardoch

This track quickly peters out and vaguely reappears in a few places but mostly the going is over very low scrub and small patches of light scree. It wasn't long before I caught sight of the summit trig point in the mist over to my right. The view at the top was limited almost entirely to the edges of the fairly large summit plateau, although every now and then there would be quick glimpses over towards the fringes of the knobbly Ben Avon massif. Other than that, nada! After 5 minutes or so I headed back down to the bealach and set up for lunch in the shelter of a grouse shooting butt next to the track. The distant noises of stags rutting continued to rumble, then there was a single sudden crack as a shot rang out. At least I had the shelter of the grouse butt - I was reassured that Landrover man and his mates weren't using me for a spot of target practice. Maybe I should have worn that bright red wind cheater anyway! Carn Liath from the grouse butt A few minutes later I heard the noise of the engine approaching and he stopped for a quick natter. I told him I was just about to pack things up and head up Carn Liath. He said not to worry as they would be kept pretty busy for the next wee while taking care of the stag they had just taken down. After packing up I headed the short distance back to the cairn and path junction, just before which I met the guy heading back out to the kill, this time driving what looked like a golf buggy.

The path off towards Carn Liath soon descends into complete sponge bog and then vanishes from sight. There was nothing else for it but to whack left up the slopes towards the summit. This was a lot tougher going than Culardoch. The heather was much deeper, the ground much boggier and rougher, especially where drainage trenches had been crudely cut across the hillside. Eventually the terrain became more bouldery and easier as the summit plateau was reached. The views from the small cairn were far clearer than from Culardoch as the cloud base had lifted somewhat by now. Ben Avon came and went with the wisps of cloud, Lochnagar remained obscured but over Braemar and down Glen Clunie towards Morrone and the Cairnwell was a bit clearer. South towards Morrone and the Cairnwell Culardoch from summit of Carn Liath Towards Ben Avon from summit of Carn Liath

I quickly fired over to the northwestern summit just in case anyone ever feels the need to fiddle with things, before returning and heading south-east down very boggy slopes back onto the track and taking the direct route back down to Invercauld and the car.

All in all a decent six hours in the hills collecting a couple of Corbetts and reversing some of the damage of a week in Provence, but I feel the Munro Monster is still not satisfied. He says Corbetts are all well and good, but it's been too long since Bidean!

I tell him the forecast looks more promising for tomorrow if he can hold on until then......

Wow I can't imagine how many miles you must have done on a motorable track - I really couldn't do that without my bike - I find that kind of thing really hard on my legs! I fully intend to have a go at Culardoch some day though...

Really - I don't mind walking on rough tracks. I thought you would be ok with that MC, not scary

I fancy this walk too - the start up through the woods (used on the Craig Leek route) is lovely.

That track out to Culardoch is a good walk - the estate farms/feeds the pheasants which accounts for the numbers.

I recognise the name- he often writes in to the Angry Corrie.