This is my first ever report, we'll see how it goes…

Started from the ski centre car park at 7.50 am. As neither of us was too keen on seeing the Ptarmigan restaurant, headed up towards the Fiacaill ridge. Clouds were quite low but were visibly lifting and were at around 1200 m when we reached the top of the ridge. The summit of Cairn Gorm was in the clouds, though, so no views from there. Stopped only briefly before heading towards Coire Raibeirt. On the upper slopes met half a dozen reindeer, one of which became almost too friendly as husband tried to take pics of them. 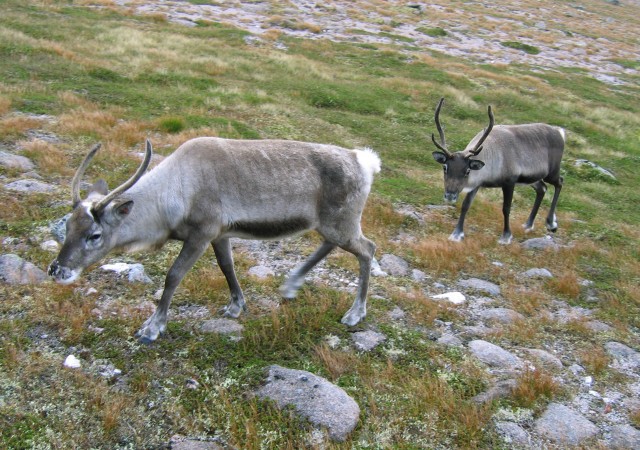 Familiar sight to us Finns

The path down to Loch Avon was steep but not at all difficult or scary and height was lost quickly. While descending saw some people on Beinn Mheadhoin, they must have camped somewhere, or else had started before sunrise. From the pics I'd seen of Loch Avon I had expected it to be quite spectacular, and have to say it still surpassed my expectations. Left our footprints in the sand and sat down by the rocks for a long break. The group we'd seen on Beinn Mheadhoin was now coming down the path from Loch Etchachan and it looked horrendously steep. After a brief search, found a place to cross the stream and headed for the Shelter Stone (was told it was not to be missed) and then after a bit of clambering over and around rocks found our way to the path towards Loch Etchachan (which was indeed steep at places). There were some people camping on the shore, and looked like they'd just got up. Maybe they'd had a late night? The summit of Beinn Mheadhoin was a surprise. Had of course seen the tors e.g. from Bynack More but hadn't realised they were that big! Spent quite a bit of time wondering about them, and then even longer having lunch (our by now traditional philadelphia and german salami sandwiches), facing south towards a totally unfamiliar territory to us. Ben Macdui had been in the clouds mos of the day, and as this was our fist visit to the Cairngorms, didn't quite know what to expect. Found the path slightly confusing as not having a clear idea where exactly the summit would be felt that the path twisted illogically. Of course turned out to make perfect sense. Met some people who asked for directions for Derry Cairngorm, and whether there was a path. Was not able to help much, hadn't even realised it was so close. Checked the map and briefly considered including it, but then decided we had more than enough to do without it. Wise decision! The summit of Ben Macdui was very busy, but managed to find a sheltered spot a short distance off the summit. It was quite chilly and had to put on the paclite in addition to my softshell. Luckily we still had some hot chocolate (with a drop of whisky) left in the thermos. While we were cozy enjoying the hot drink and this time bagels with loads of brie, two fell runners emerged, one wearing shorts the other very "colourful" tights, both in t-shirts. As you'd expect, they didn't linger but did stop to take some pics. By this time the clouds had lifted and got views to yet another unfamiliar territory, i.e. towards Breariach and the Devil's Point & co. Looked quite interesting.

Had initially thought of coming back via the Miadan Creag an Leth-choin (?) ridge, but then remembered reading about Coire an t-Sneachda on the forum and decided to take a look at that. If it didn't look good, could always go down via the Fiacaill ridge. Found the top of the path ok and headed down to the lochans. Stopped for a while to watch a dipper go about with his (or her?) business. There was also an unidentified small bird on the shore, looked like it was watching the dipper as well. The last stretch back to the car felt very long even though didn't feel particularly tired. But my God it felt good to take the boots off after 11 and a bit hours...

All in all, a good week (Sep 5-12) with 12 Munros (Bynack More, Monadhliath 3, Drumochter 4, these 3 and Meall Chuaich). Can't believe how lucky we were with the weather. Only light drizzle and never for more than a quarter of an hour, and clouds were mostly above the tops so got to admire the views as well. Wasn't particularly warm, though (except on Friday), and occasionally very windy.

(am I imaging things, or are the pictures huge?)

Well done Mrs T,
Great walk report and some great pictures. How on earth did you get so close to the deer? Just love the last picture looking down into the valley.

They're reindeer and very tame!

I'm astounded at someone finding the energy to tack on Ben MacDui to what I found was otherwise a pretty hard day! You must be superfit!! Great report and pictures - love the sandy beach one and some of the ones of Shelter Stone Crag and the head of that valley are superb - very atmospheric...

This is mysterious, I'm sure I replied to this already, but now the message seems to have gone?

mountain coward wrote: I'm astounded at someone finding the energy to tack on Ben MacDui to what I found was otherwise a pretty hard day! You must be superfit!! ...

Definitely not superfit! I wouldn't even say "average" fit! We figured that since the alternative was going back down to Loch Avon and then all the way up towards Cairn Gorm again, it couldn't be much worse going over Ben Macdui instead. Plus you'd get another Munro, and a circular route instead of just there and back.

Well your logic is certainly correct but I did the 'over the Cairngorm ridge (excluding the summit which I did another time) via the Goat Track and Coire Domhain, round Loch Avon, up Beinn Mheadhoin, back over the saddle of the Cairngorms ridge' with a huge group of people and we all thought that was a pretty hard day!