Four seasons in one day on Far Eastern Fells.

Four seasons in one day on Far Eastern Fells.

our_route.gpx Open full screen  NB: Walkhighlands is not responsible for the accuracy of gpx files in users posts
Deciding where to go in the Lakes is not always the easiest, but as MWIS and MetOffice indicated the Eastern side would have the better of the weather, we headed for Howtown, to climb Rampsgill Head direct and take in a couple of neighbouring fells. We parked at St.Peters Church and followed the road into Martindale, then took the path under Steel Knotts just before Martindale Old Church. Beda Head from the track.

The track all along Martindale into Ramps Gill was quite wet and boggy, evidence of the recent rains

It started spitting as we headed along here, but there was blue sky evident as well, so it wasn't too much bother Bluebells in Martindale Forest, Hallin Fell in the background. Our route leading up Ramps Gill.

This area is well known for its Red Deer and there was plenty of them around today, more than 150 we reckoned. Part of the herd of Deer.

The rain stopped as we hit open land, and it became quite warm. As we started our final ascent, another shower passed over us, but at least it produced a cracking rainbow Rainbow in front of Rest Dodd & The Nab.

We headed up the furthest scree chute, exiting just below the summit. From here, we took in High Raise, Kidsty Pike & The Knott in about 40 mins, probably the quickest 4 tops you'll ever do 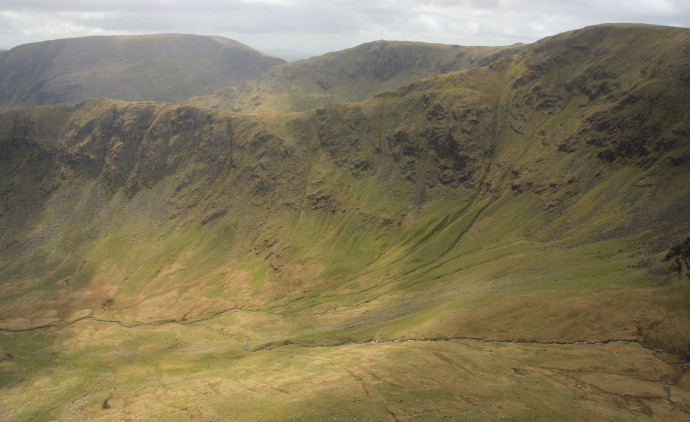 We stopped for lnch below the summit of The Knott, were the temperature really dropped. We took the rough route straight down off The Knott to Hayeswater, were we followed the Gill down to Hartsop Village. The old barn, a local landmark.

We decided not to go Pasture Bottom

and carried on through Hartsop to the lower path leading eventually to Boredale Hause. The difference in views was amazing. It was a decent enough track along this route, though the weather was starting to deteriorate. Once over Boredale Hause, the rain set in all the way along Beda Fell, which made it seem a longer walk than it probably was As we began our descent, the rain stopped and the sun began to show Pikeawassa on Steel Knotts lit up in front of Loadpot Hill.

It was a straightforward walk down from here, over Winter Crag & The Lodge, before hitting the road and back to the car. The bridge over Howegrain Beck.

With the sun, rain, sleet, bluebells and Autumn colours, we really did get four seasons in one day, but a great walk it turned out to be

I love the way the fells glow when the sun shines on them following a shower. Beautiful pics.

Great report, the lakes look stunning, have only done 1 walk there last year, but do plan to return.

Great stuff Mamoset, that looks a fair old hike all in, wonderful shots of a beautiful location.