Finally got fed up with waiting for ‘good’ weather and packed up the rucksack with supplies for 5 days in the hills and headed off to Linn of Dee, a toss of a coin decided West or North, it was North!
I set off from the car park at around 10:30 with a 12kg sack (including 3.9kg of food) and no particular place to go or be, first stop was ‘Bob Scott’s’ for lunch where I met up with a Czech couple on route to Blair Atholl (they were having a later start than me). Had a pleasant ½ hr chat over snacks and coffee before setting off on the trail again, still undecided where to head.
Walking up the river towards Derry Lodge Carn a’ Mhaim came into view through the trees, a summit I’d never explored, so the choice was made and I crossed the footbridge and headed off up Glen Luibeg. The Luibeg burn was in no condition to boulder hop today so it was 200m up the burn to the bridge, ducked under the deer fenced about 100m after the bridge and cut across open country to join the good path leading easily to the summit with only the strong head wind (NW) and occasional snow flurries being an annoyance.
A broody looking day over Ben Macdui 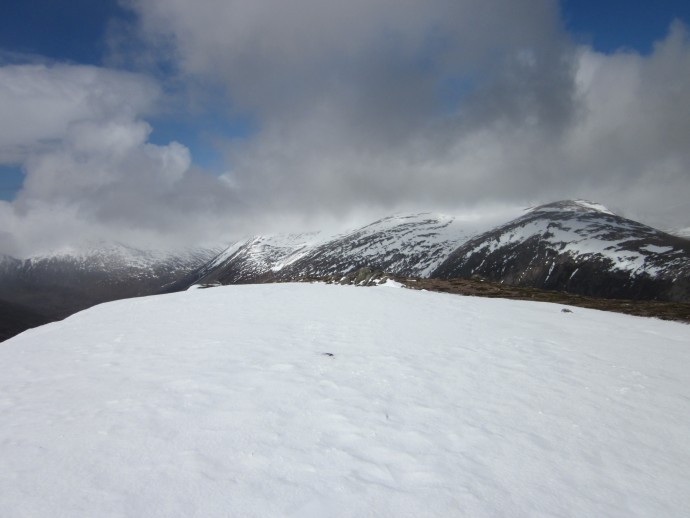 The route to the north along the ridge to Ben Macdui was very tempting but given the conditions (half a Scottish winter) and the steep slog up with a 12 kg sack I decided to leave this for another day and head for the comfort of the Corrour bothy. Toyed with the idea of descending north to the bealach and then following the Allt Clach Taillear down to the Lairig Ghru but I couldn’t remember the lay off the land so headed back down the ascent route.
Got to the bothy to find 3 others already in residence, they even had a brew waiting I just had to produce a cup, what gentlemen! No one else turned up so there was plenty of room and I didn’t have to pitch the tent. That night I enjoyed the full 3 course meal (soup, pork curry & rice; fruit cake & custard), nothing like the great outdoors and a bit of snow to boost the appetite (as well as not having to carry it the next day). We even managed to rustle up enough sticks for a small fire for an hour which made the place very homely.
Considered two possible routes for the coming days (once over the Lairig Ghru) either west looping down Glen Feshie or east down the Lairig Laoigh, the east route won as it avoided more tarmac and I could revisit the Ryvoan bothy.
Managed to ignore the clattering about at some un-godly hour in the morning thanks to eye mask and ear plugs (both bothy essentials), finally turning to around 7:30 after the others had departed for Cairn Toul. Cup of coffee in hand I stuck my head out of the door; light dusting of snow around the bothy and still snowing; the weeps running down the crags of Devil’s Point the previous evening were now verglas, it must have been a hard frost!
Finally got my act together around 9:00 and set off up the glen, head down into the stiff northerly and snow showers. Two hours later I was at the bealach, Pools of Dee, tricky going with the new snow hiding the ‘ankle wreckers’ amongst the boulders, was also surprised at the large/ deep snow drifts still around.
A wintery Pools of Dee 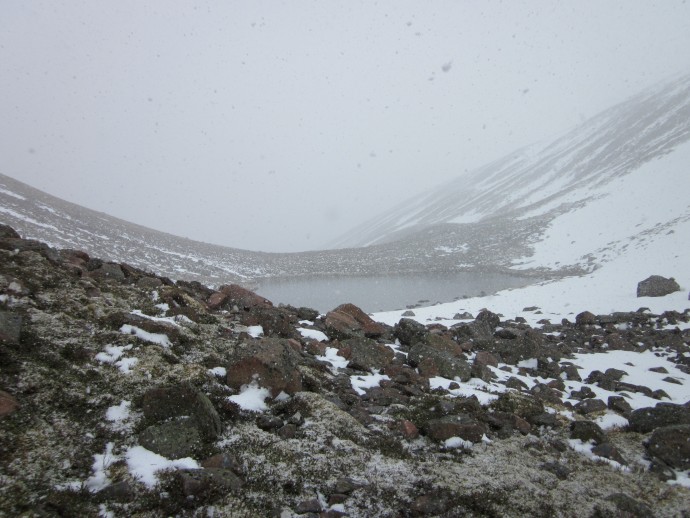 I made the descent from the bealach to the crossing of the Allt Druidh before stopping for a double helping of cup-a-soup in the shelter of the boulders. Met up with a trio heading to Blair Atholl (popular place), one of them was a Dutchman carrying a folding picnic chair lashed to the outside of his rucksack, my comment raised the response “I like my comfort at the campsite”! Hopefully they made it in time to catch their train.
Headed over the Chalamain Gap (Creag a’Chalamain), not as tricky as I’d been led to believe, you’ve just got to be confident with your feet and go for it. I was glad that the recent snow fall hadn’t made it down to this elevation, that would have made it tricky! 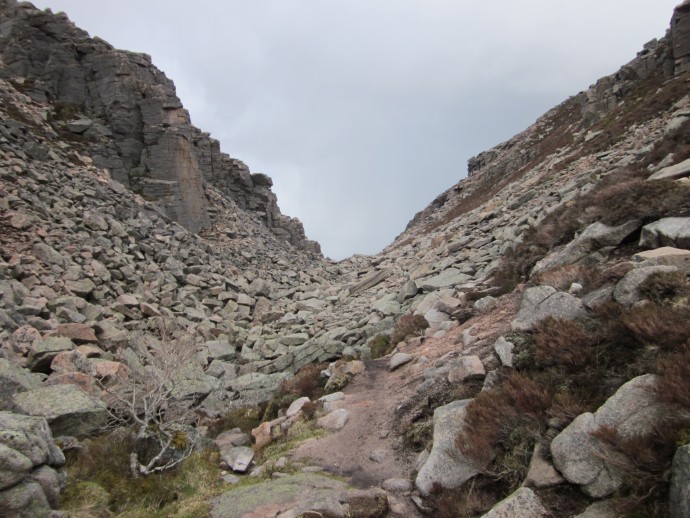 Once on the downhill side of the gap the road to the ski centre was quickly crossed as I headed cross country through the forest to gain the path down the Allt na Ciste and the track to the Ryvoan bothy.
Arrived at the bothy having spent the last ½ hr yomping through the rain to find it unoccupied, I quickly sorted out a brew and then during a lull in the rain went to check out the area for possible places for a tent (just in case). Went off down the hill for 50 – 60m to where there was a nice large flat grass area, a small sign basically said ‘do not camp here it’s a black grouse lecht’. While cooking dinner that night I was treated to around 15 black grouse arriving at the lecht and strutting their stuff, was going to go out after dinner to try and get some photo’s put the arrival of 4 cyclists scared them off so you’ll have to make do with the photo from the window. 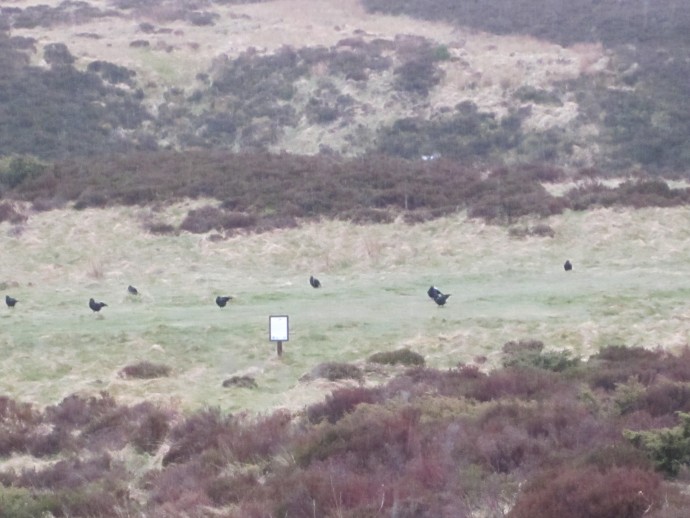 The bothy was stocked with some nice dry kindling and my new cycling friends had brought along ~15kg of coal so we had another nice fire that evening and still left ¾ of the coal for the next visitors.
Day 3 started at 6:00 with the cyclists getting ready for a 7:00 departure (even through the ear plugs), but still managed to snooze through to 7:20 and glimpsed them heading off over the hill towards Nethy Bridge in the rain. I was all ready to depart an hour later; have decided that bothy hopping is great, no wet tents to pack! Watched the rain coming down and decided to get out the stove again, have another cup of coffee and watch the rain come down.
I finally left the bothy at 9:30 and headed off towards the Lairig Laoigh and the Faindourain Bothy in a light drizzle. On reaching the track end and the recently refurbished footbridge over the River Nethy (NJ 020 105), reasonable camp site, I could see that more snow had fallen overnight. 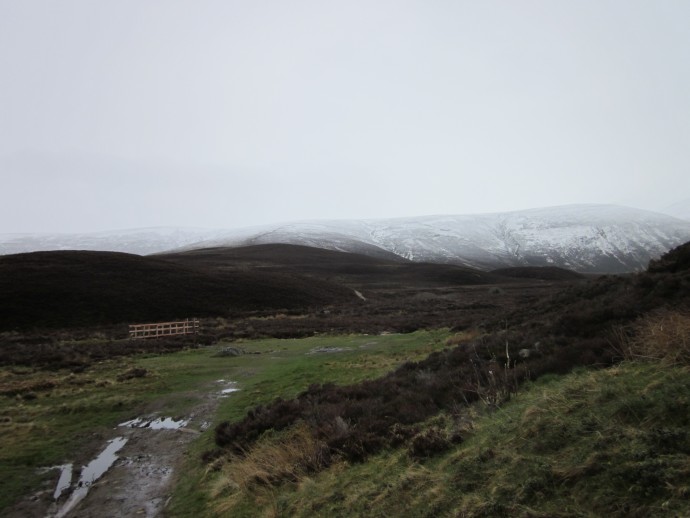 Reached the pass at around 830m after 1 ½ hrs with the path being increasing difficult to follow and then decided to take a diversion up the north ridge of Bynack More to the summit even though it was only intermittently clear of clag. The ridge proved more ‘interesting than expected, either side of the ridge had drifts up to waist deep so the easiest passage was by scrambling up the numerous boulder outcrops. 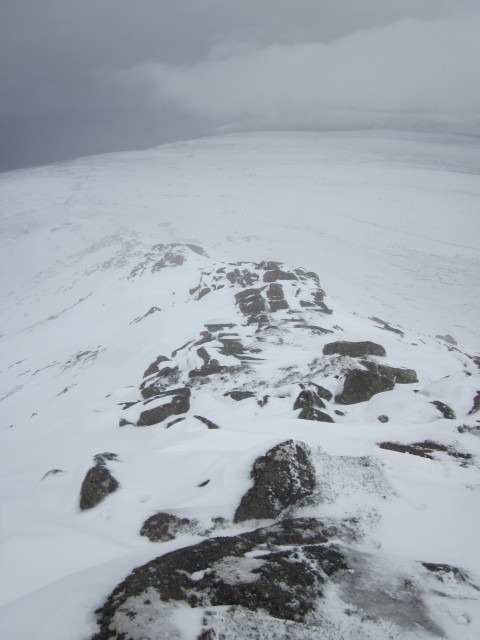 The summit cairn appeared unexpectedly out of the clag 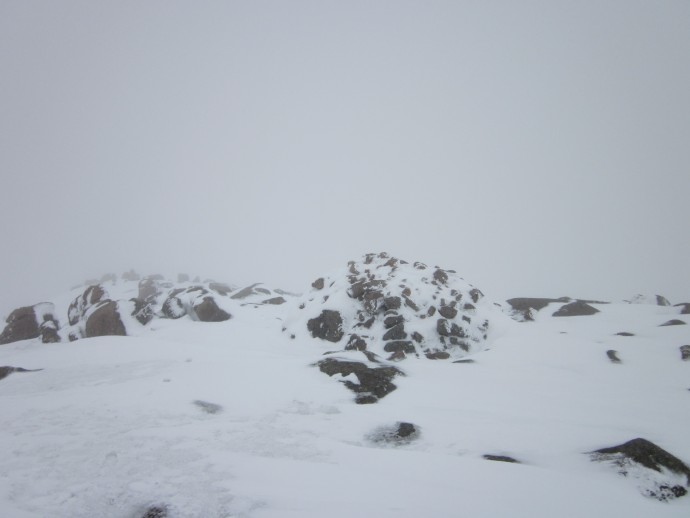 After a quick scan of the map decided to head off south path the ‘Barns’ before swinging east to join up with the main path again; 10m visibility, white sky and white ground makes for tricky navigation and the occasional boulder sticking out of the snow made some welcome contrast until the Barns of Bynack loomed out of the clag.

Had a quick stop for snacks in the shelter of the outcrops and managed to get a phone signal so I could pick up the latest forecast; rain/ snow showers and intermittent clag on tops, no change!
Headed off south- east down the steep slope, knee deep in fresh snow, and crossed the glen near Lochan a’Bhainne to rejoin the path down towards the Fords of Avon. The crossing of the Allt Dearg proved borderline, ½ boot, was grateful for the 2 walking poles. I was only at the refuge for 10 mins, with coffee on the go, when I was joined by a TGO challenger. After 20 mins chat he set off to the Faindourain bothy, I didn’t want to get involved with a potentially crowded bothy (other TGO’s) so decided to stay at the refuge. The refuge is quite cosy for one or two, probably 1.5m * 3.6m, not really the place for even a group of four. Had another 3 course dinner while watching the snow flurries out of the open door (no window) from my sleeping bag and finished the last nip of scotch. Had checked out the crossing of the ‘stepping stones’ the night before and decided that without waders or 150cm inside leg there was no way to cross without wet feet so after packing up it was on with the crocs and out into the snow for the 25m dash to the river and straight across, bl#?*y freezing. Once the boots were on it took the feet 15mins of yomping to get warm again. Had decided to go up Beinn a’Chaorainn and then follow the ridge line down to Beinn Bhreac before descending to Glen Derry so headed off south east straight up the steep slope. Not much to see after the first 100m of ascent, eventually the summit cairn appeared out of the clag. Didn’t spend a lot of time on the summit with the photo and site seeing opportunities being a bit limited and I quickly set off south-east towards the bogs of Moine Bhealaidh. Luckily the clag was lifting a little and by the time I was down to around 900m I was underneath it this allowed far easy navigation across the featureless terrain, it’s not easy to zigzag around bogs and pools while following a bearing! By the time I’d reached the summit of Beinn Bhreac the clag had cleared the top but Derry Cairngorm (200m higher) was still cloaked. I made a relatively quick descent of heather covered slopes to the south west to rejoin the Lairig Laoigh and had a late lunch at Bob Scott’s before heading down the glen back to the car and return to ‘civilisation’.

Well done and some good navigational skills there.

Nice wee tour of the Cairngorm bothies there. Nice to know they all proved their worth and glad you enjoyed them all.