First time up Ben Nevis including an aborted attempt of the CMD Arete in reverse due to ice and whiteout.
Forecast is a break in the weather for Saturday only, so the best chance for Jesper to climb Ben Nevis before heading back to Tanzania. Great drive from Glasgow to Fort William on the Friday, hills looks particularily dramatic in the evening light going through Glencoe. Saturday morning, blue skies over Loch Linnhe from Annie's B&B (Glenmorven, the one with the Scottish flag) in Fort William. After a hearty breakfast we head off for Glen Nevis and are on our way up the Ben around 8.45am while the car park is reasonably quiet. First photo on the way up taken from the Red Burn, the zig-zag below can be one of the toughest parts of the climb until the gravel path is reached near Lochan Meall an T-Suidhe. Photo taken from the Red Burn, could this be the mark of Zorro !!

Also a nice spot for a cup of tea today Jesper, I would imagine there could be quite a torrent coming down the gully after some heavy rain or quick snow melt. The Red Burn, about half way up or down.

After the Red Burn the path begins a longer stretch of zig-zags are the snowline is reached at just over 1000 feet. The rock path is well maintained and has some gravel sections so not to bad on the legs. You'll be glad of the zig-zags as its pretty steep most of the way up.

Once the snowline is reached the path begins to become very slippery, the main danger is fellow walkers coming down and falling towards you, best keeping to the higher parts of the path where the snow isn't so compacted and icy. Above the snowline and its all change underfoot and overhead.

After a very enjoyable climb we reach the summit before midday while the weather is still quite pleasant, I estimated that there was about 6 feet of compacted snow on the summit as we simply stepped up onto the Trig pillar. 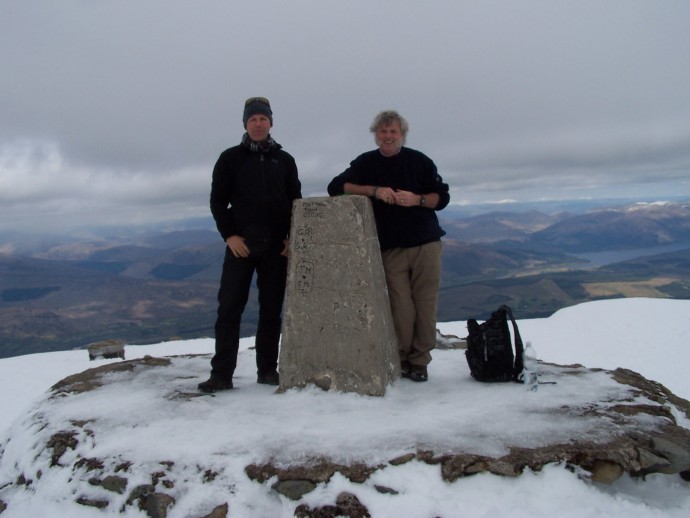 Jesper and I finally on the Roof of Scotland. Plenty of snow on the summit and Carn Dearg

Next decision do we attempt the Carn Mor Dearg Arete the blue skies are beginning to disappear and the cloud base is lowering ? A snowbound Carn Mor Dearg with Aonach Mor behind.

We spot a group of three climbers struggling to come up from Coire Leis onto the Ben Nevis end section of the arete, so we decide to hike down the back of the Ben towards the arete to access the options and get their opinion of the conditions. The boulderfield on the steep slopes is almost invisible due to the deep snow cover but we follow the old fenceline which is still visible above the snow, by the time we reach the climbers coming up we are in a near whiteout. A quick chin wag with the three climbers make the decision to turn back an easy one - the arete is icebound and best left to another day - maybe a lifesaving decision. After some hard work in the deep snow be climb back up to the summit of the Ben amid whiteout conditions. Without delay we head back down the Ben into the mass of climbers still on the way up. On the way down there are many still coming up. Jesper, who currently lives in Tanzania, is enjoying the snow.

For those like Jesper and I, new to Ben Nevis, the next two photos show how dangerous changeable conditions can be on the Scottish hills, both photos were taken at the same time from the same place. Looking down from the snowline. Looking up from the snowline.

A good move going up before 9am today as it turned out to be a 3 Peaks Challenge day for charity and the trail up the hill was 'mobbed' by the time we were on our way back down. It would be interesting to know how many reached the summit, we passed a wide range of people including some that may have been wiser to stay at ground level, a number of first time climbers were still leaving the car park when we left around 5.30pm. At 4pm people were still heading up the Ben despite the change in weather.

All in all a fantastic day out on Ben Nevis with the added interest of seeing the CMD arete close up and experiencing the dramatic changes in weather conditions on the Ben. Jesper returns to Scotland in the autumn so we plan to attempt the CMD arete from Glen Nevis via the Aonach Mor side.