Jack and Tess were both homeless dogs and came to us via a Rescue in Lancashire. The day we got Jack was a 15 hour round trip and when we got home my other half said "We're not doing that journey again!".

Jack was a lovable hooligan. He couldn't walk on the lead, had no recall and whenever he was left alone set about demolishing the house due to his separation anxiety. So 7 months later we did the long journey again - this time to collect Tess. From the gun dog side of the breed, Tess walked beautifully on the lead and had good recall. We hoped having her company would help Jack with his separation issues and to a great extent that proved to be the case.

When the Rescue heard I took the dogs out on the hills they asked if I would do a sponsored walk to raise funds to help other dogs in need. So the idea of climbing Ben Nevis was hatched. But I knew the dogs' pads wouldn't easily cope with the abrasive rock unless they had worked up to it so we planned a number of training walks for them and climbing these hills was part of that build up.

We parked off the A86 near the concrete bridge over the River Spean and took the estate road that leads to Lochan na h-Earba.

It had taken several months walking in the woods behind our house to get Jack walking on the lead without wildly zigzagging from side to side following every scent he picked up. He was very strong so for a while I had a sore shoulder from the constant yanking around but on this walk I found that if I walked ahead he would follow in pretty much a straight line - and effectively towed Moira along behind him!

This is how to pull a woman! 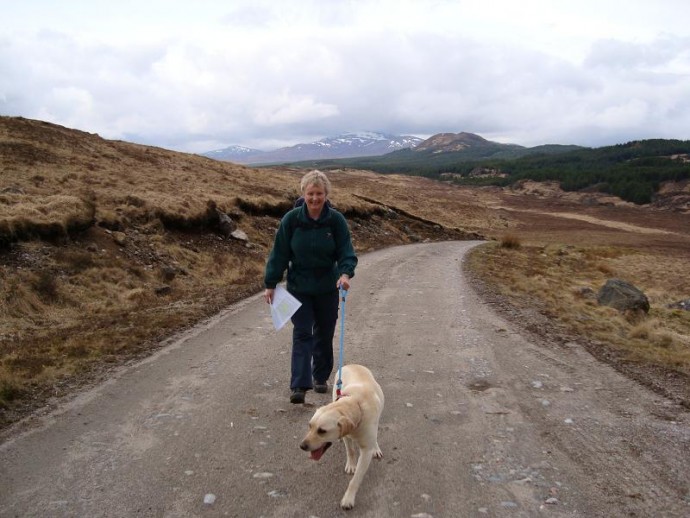 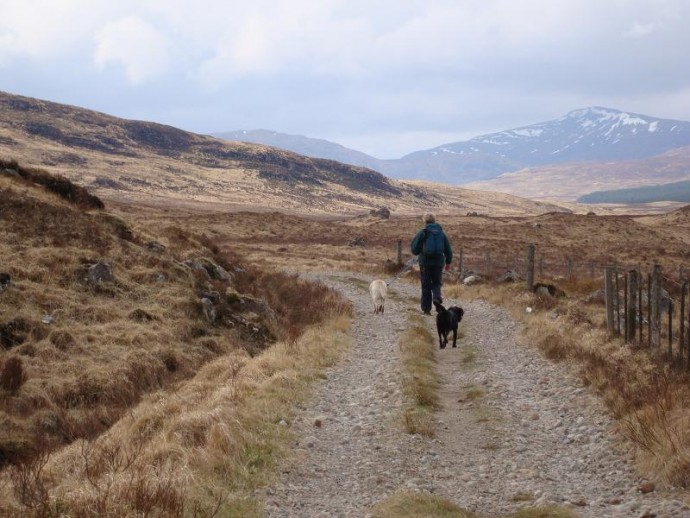 Lochan na h-Earba is a lovely spot in itself and well worth the walk in.

It was the result of much practice for Jack to be able to sit still for a photo! 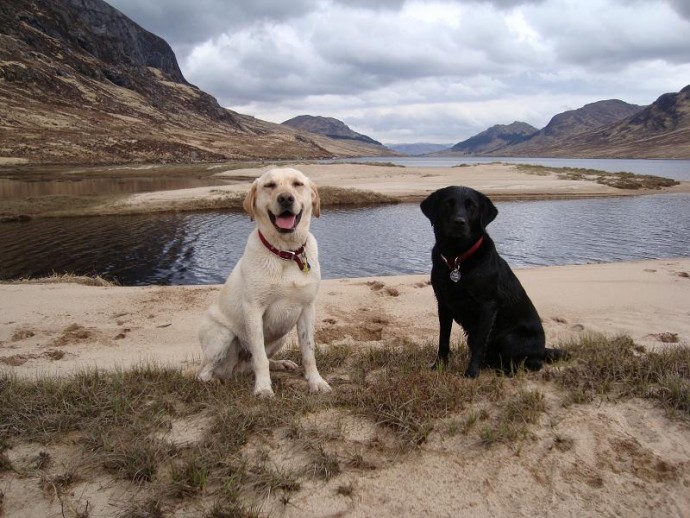 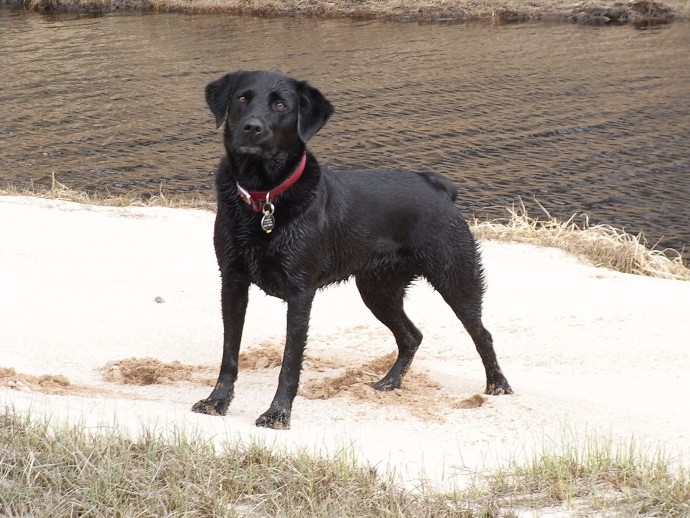 From the lochan we took the stalker's path south east up the Allt Coire Pitridh.

Dog power has its uses when climbing a hill! 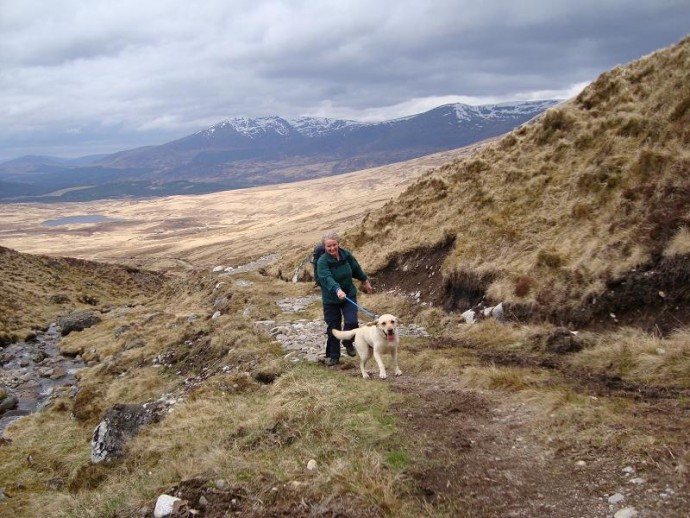 We walked up to where the path went left for Creag Pitridh and shortly after that left the path and headed up the slopes of Geal Charn. The previous time I was up here with Evelyn we were in deep clag and only climbed Pitridh so I was enjoying the views today!

View across to the Creag Meagaidh group and distant Loch Moy If I focus hard enough you'll give me that banana Oh no, it's not working! Dogs racing back to me on the slopes of Geal Charn Racing back to Moira again We walked down the slopes of Geal Charn to the col to its west and then up the zig zag path to the rocky summit of Creag Pitridh. From the top of Creag Pitridh we took a south west line to rejoin the stalker's path and back to the car.

View west from almost back at the car On 21st June we were back again with Evelyn and Linda to climb Beinn A'Chlachair. Did the same route in and had the obligatory coffee stop at the lochan. We noticed a couple of tents not far from the path by the lochside. More of them later! We took the stalker's path up beyond the turn off we had taken to climb Geal Charn and found a path up the north east ridge of Beinn a'Chlachair which was steep and rocky but soon levelled out and from where it was an easy walk to the summit. I forgot to take the dogs' pics at the cairn so called them for a photo shoot a bit along from it. The difference in their demeanor is typical of their personalities.

The princess and the clown I can do noble looking as well About to decend Beinn a'Chlachair with Lochan na h-Earba below It was a steep descent on grass which was quite hard on the knees. As we neared the lochan Jack must have smelt sausages cooking as he suddenly took off like a missile in the direction of the tents. Imagine the embarrassment if he got there and no one was about to stop him helping himself!

I'd been doing a lot of work on his recall to the whistle which is the only reason he was off the lead so this would be a big test for him as this dog, like all labs, is obsessed with his stomach. I blasted on the whistle and he did an immediate U turn and ran back to me. Phew, was I relieved I didn't have to go and grovel to irate campers about their stolen supper!

Yesterday we said goodbye to Jack and our hearts are sore. Some time I'll write about his last hill but wanted to let folk know... and this report from his early days says so much about his personality. He was such a kindly natured dog that even yesterday when he was feeling dreadful he wagged his tail to everyone at the vet's. And while we were sitting waiting to be seen he turned and looked at us, making Pete say "Oh don't do that". But we had to do the right thing by him.

I remember you posting about Jack and the sausages, on the Collies escapade on BEM

I have never had a puppy to train up , like you my dogs have been 'Rescued' or a stray( new house= new dog

). Don't really know if I have the inclination to start from scratch. I am much happier being in a similar position to you of just taking it on ,no matter what, and God help us

soulminer wrote:I remember you posting about Jack and the sausages, on the Collies escapade on BEM

I'm sure your dogs are paragons of virtue

compared to our Jack.

So funny about the dogs eating people's sausages, not so funny for the campers though

Everytime Im out somewhere and I sit down for my lunch a dog seems to appear from nowhere ready to scoff my sandwiches, now Im on the lookout for them all the time

This report made me smile too

Thanks RK. They're great company on the hills!

What kind are you planning on?

morag1 wrote:Everytime Im out somewhere and I sit down for my lunch a dog seems to appear from nowhere ready to scoff my sandwiches, now Im on the lookout for them all the time

I try to keep mine away from other walkers who are sitting down as they're terrible scroungers if they get half a chance!

The princess and the clown were out with me again today - appropriately enough at the Dog Falls in Glen Affric. I'll put pics on when I find the time.

The princess and the clown yesterday in Glen Affric 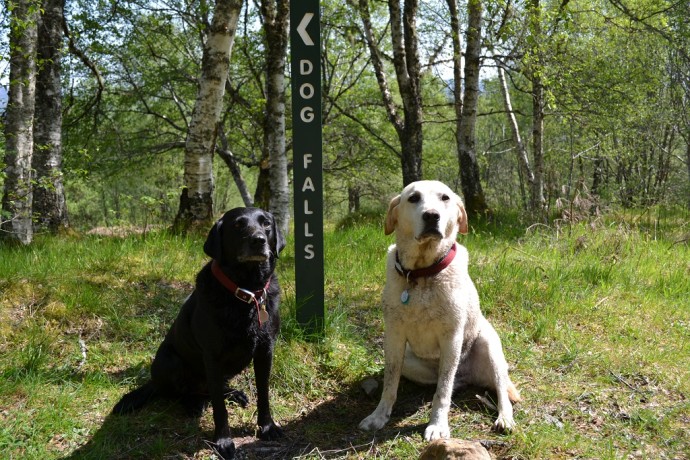 Today we lost Jack. At two months short of 15 he was old for a lab but still enjoying his walks and happily climbed his last hill (a Sub 2000) at Easter. But this week he went off his food and went downhill quite quickly so we knew the time had come.

He was a legend and we will miss him.

At top of Druim na h-Earba, with Ben Nevis behind