Share your personal walking route experiences in Scotland, and comment on other peoples' reports.
Warning Please note that hillwalking when there is snow lying requires an ice-axe, crampons and the knowledge, experience and skill to use them correctly. Summer routes may not be viable or appropriate in winter. See winter information on our skills and safety pages for more information.
Post a reply
41 posts • Page 3 of 3 • 1, 2, 3

morag1 wrote:I was hoping to visit Culzean Castle this summer but after reading this report I am really tempted to take the boat to Ailsa Craig and climb to the summit.

You could combine both on a weekend trip, there's got to be a campsite or b&b there somewhere.

Caberfeidh wrote:You could combine both on a weekend trip, there's got to be a campsite or b&b there somewhere

Ta for that, will have a look for both on the website

Fantastic stuff Donny. I spent my childhood looking out to Ailsa Craig as i'm a Troon boy, but to my shame never made it out to the island itself, despite kayaking up and down parts of the coast. In my defence growing up in that town we were encouraged to whack white balls as far as possible along stretches of grass rather than explore the hills

Yup..I know Troon well laconic surf..I learned to swim in its open swimming pool..which tells how long ago that was

However, although I was reared in Ayr..I managed to avoid the golf craze

Marge..its a hard choice as Culzean is well worth the visit too as it has lovely grounds and the castle is worth visiting. I normally walk in from the Maiden's shore end to wander around the grounds..simply because Im a tight fisted old git and I dont have to pay the entrance fee going in that way. There is a huge free car park at Maiden's too

Thanks to everyone else for their interest.

After doing the hill walk, we then boarded our boats to tour round the island. The sea was still like liquid silk and reflected the sea birds basking in the hazy sun. The seagulls of various types didn't seem to mind where they nested ..but the other birds were quite selective. The puffins chose one area of the cliffs around the north end..then the guillemonts were next followed by the razor bills ..then the many thousands of gannets seemed to prefer the south western cliffs. Heading round the north end of the island, I could clearly see the remains of the railway line and a few bridges which spanned gaps where I think the granite was quarried The railway line finished at the northern fog horn and not far round the corner was the first and largest cave. Workmen from the quarry found two ancient stone coffins in it Once past the cave, you then reach the tallest sea cliffs at eagle's nest. Many yeas ago, a pair of eagles used to nest at the top of this cliff until the quarry tenant shot one. It measured 7 ft from wing tip to wing tip. It was stuffed and now hangs on the wall in Culzean castle. Nowadays its the Guillemots that prefer this cliff for nesting on.. they are everywhere on any flat ledge. However..its when they are on the water that I found them fascinating to watch. They seemed to do a hop skip then jump on the water to build up flying speed Moving further round was the Razor bill ledges Tomorrow I hope to finish the report with the gannet's cliffs.. for me..that was the most spectacular sight of the day

Cheers Donny! This has made my month! It is a dream of mine to sea kayak out to AC and then climb it. Two summers agao when we spent a couple of nights down in Girvan, we tried to check out the boat trips but had no joy. Then last summer I did a sea kayaking course at Glenmore Lodge and thought what a great way it would be to get out there. In fact, my daughter Ailsa is so named partly after Ailsa Craig and it's particular significance!

Your posts are excellent, thanks!

What a fascinating, informative, and beautifully photographed report. I first saw Ailsa Craig when I was 12 and on a family holiday and it has held a kind of fascination for me ever since. Excellent stuff.

Fantastic report, I am enthralled!

I remember driving to Girvan from New Cumnock, via the back roads through Dalmellington. On the final stretch of the road, the Ailsa Craig lies directly in front of you. The sun was behind it and with a haze in the air, the Craig was casting a gigantic shadow, giving the affect of looking at enormous Tunnock's Tea Cake the whole way down the road.

Can't wait for the final installment.

Thanks to all for your comments and patience, Im now back in civilisation with internet access so can add the last part of my Ailsa Craig adventure.

Without any doubt, its the south western aspect of Ailsa Craig that is the most impressive and it can only be seen from a boat. This is the area where the vast majority of the seabirds nest, not on the lighthouse area or on the path to the top.

Due to the huge scale of the cliffs and sheer number of birds, my photographs fail to convey the sense of being there, nor do they capture the noise or smell of 80000 sea birds. To illustrate my thoughts, this photo is of a small section of the lower cliffs. The kayak gives scale to the scene, but the photo doesn’t show the hundreds of birds just above the kayak. The following two photos are zoomed in on areas of that first photo, and perhaps you can get an idea of how many birds are there. A barrage of birds droppings fall from the sky, painting the rocks and boats below with white. The cliffs are too tall to see the many birds in these photos but they show the basalt columns and their different colours. It is 1100ft from the sea to the top of the Ailsa Craig Its around a two mile trip to go round the island by boat then it is ten miles back to Lendalfoot on the mainland. The kayakers were hoping for some wind to assist on the home stretch and hoisted their sails in anticipation. However they still had to paddle for power, as there was little wind. 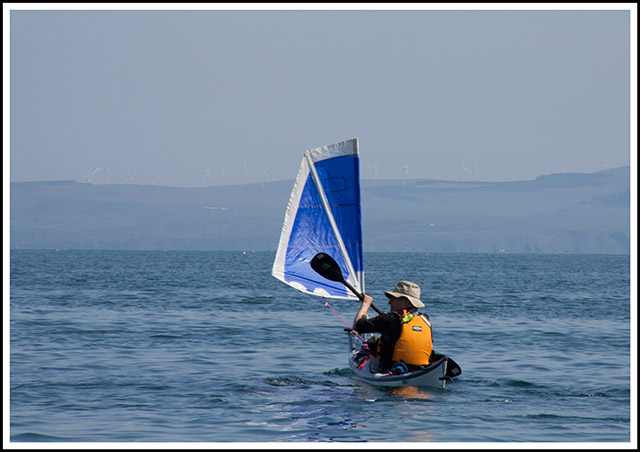 It was a sad feeling leaving such an interesting island behind on such a beautiful day. I didn’t wait for the kayakers of the way back. They are far more sea worthy boats than my small vessel which will swamp in a wave. I headed for the mainland as quickly as I could, the VHF radio had announced to expect a freshening wind in the area in a couple of hours time. I made home in perfect conditions and the Kayaks were only half an hour behind me. Another great adventure was complete

Hope you enjoyed following it.. and my thanks for all the comment

Thank you for sharing the pictures and the photos..I always wondered how it looks like on the island and I did not realize so many birds live on it - pretty amazing and yes the smell is something....urgh! One needs to have experienced it!!

Top
23 people think this report is great. Register or Login free to be able to rate and comment on reports (as well as access 1:25000 mapping).