The midweek sneaky peak club was looking not possible for me this week as I could not get out on Tuesday. Then up step my friends Colin & Dave who were planning to go out on the Thursday. Dave wanting to do the Creag Meagaidh circuit. Day worked for Andy & Mark. Polly sold her soul to the NHS for a day of, but alas Ron was working.
Texts & FB chat later the route had grown arms & legs & we were going to follow in the footsteps of the mighty Monty (Danrun, Iain Watson & Thomas did the walk as well) & add on Beinn’s Teallach & a’Chaorainn as well. So 5 munros on what turned out to be one of the hottest days of the year so far.

Mark travelled up the night before to have himself a wee wild camp. Met him at Creag Meagaidh nature reserve car park, which was to be our finish point, left a car & then drove the few miles down the road to Rough Burn for the start.
Suited & booted and off for 09:20. Polly feeling extra chipper in her new……………………………..

………. Boots, whilst Andy moaned that his all singing all dancing Haglofs pants had not arrived as promised. I don’t need to go into much detail but his pants set the tone for the day & he took a lot of stick.

Through the gate & across the field heading for the top of the tree line. A wee river to cross. Then up the open hill side with the views behind just getting more stunning as we climbed.
The first summit was reached fairly easily, with a small debate on which cairn was the true summit, touched both just to be on the safe side. Already from here we could see the broad ridge to Creag Meagaidh, The Window & Stob Poite Coire Ardair. Dropped down to the 600 meter bealach & then up a’Chaorainn which in this heat was an absolute bugger. A nice we stream on the way up to top up the water & soak our hats. Once on the ridge we dropped our packs (I stupidly left my gps in mine so the track does not have us at the summit) for the gorgeous ridge walk to the summit which is the middle one of three cairns. The views were just stunning all around.

From the ridge there is a path that takes you down to a bealach at 850 meters. Nice & high, but the long broad ridge to Creag Meagaidh just goes on & on (about 4k) Once we were there the hard work of the day was done in terms af ascent, but the final munro of Carn Liath looked, & is miles away.
Past mad meags carn & down to the Window & up to SPCA who’s charm is in the views of the Creag M cliffs. The cairn is quite small.
Then the long walk to Carn Liath over three tops with small ascent after each one before arriving at our 5th munro of the very hot day.
The walk out from here is not too bad bouldery at first, then a boggy path which becomes very narrow through the trees until you emerge onto the nature reserve paths.
An absolute cracker of a long day with great banter & much fun.

These photos are a small selection of the 500 odd we took between us & I’m sure some others will be added. One or two probably should not be seen in the public domain 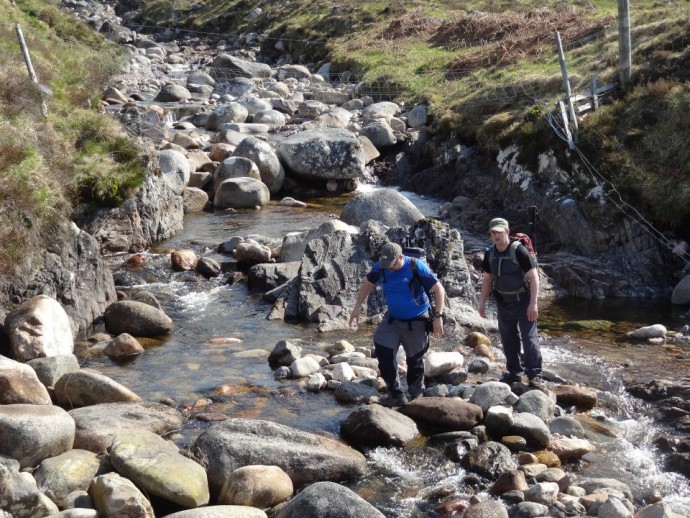 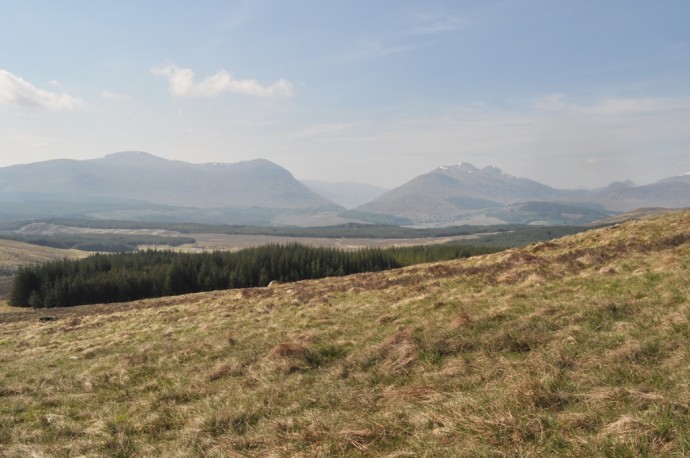 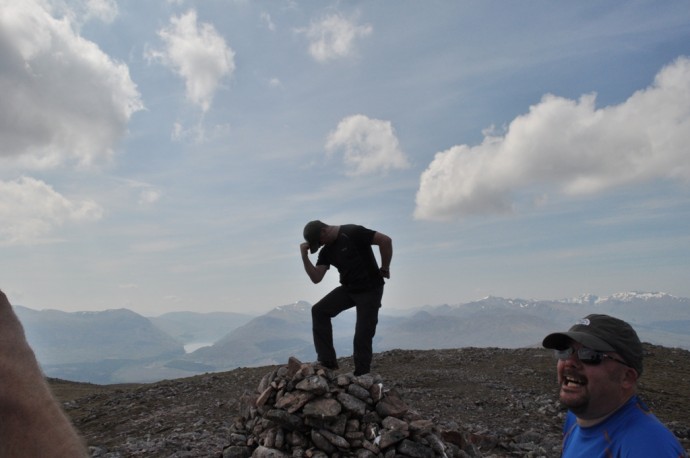 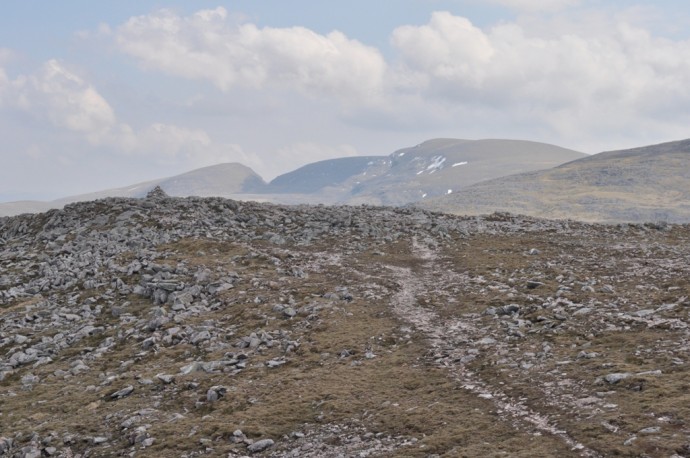 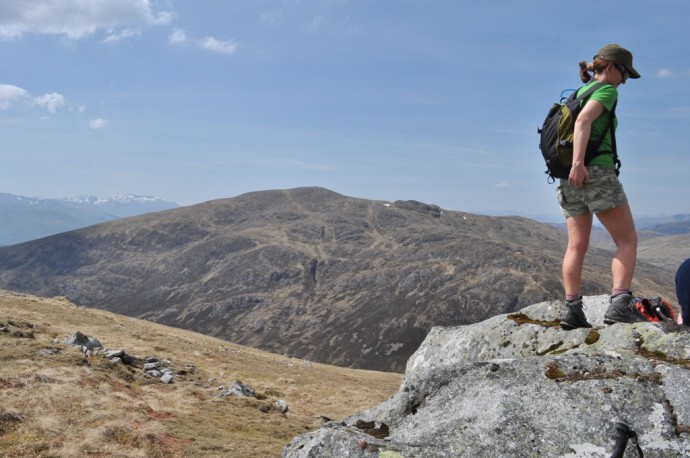 Looking back to Beinn Teallach 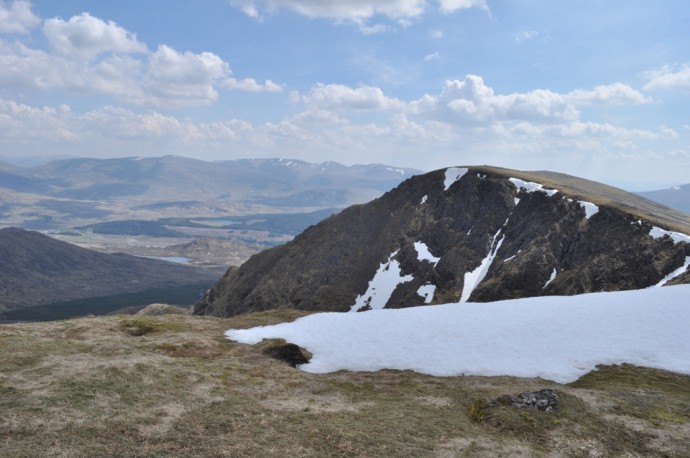 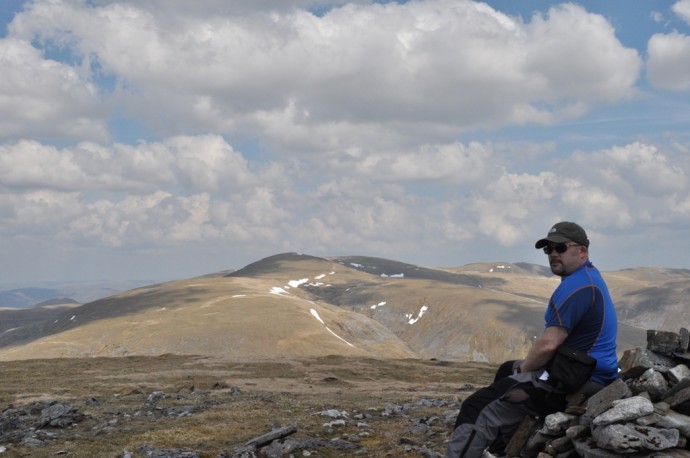 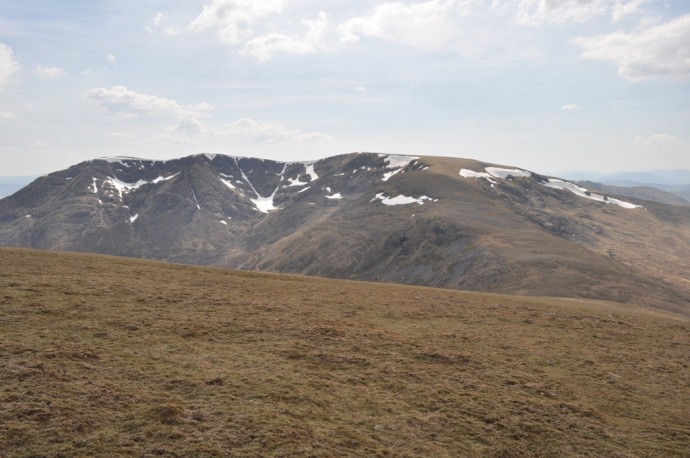 Looking back to Beinn a'Chaorainn 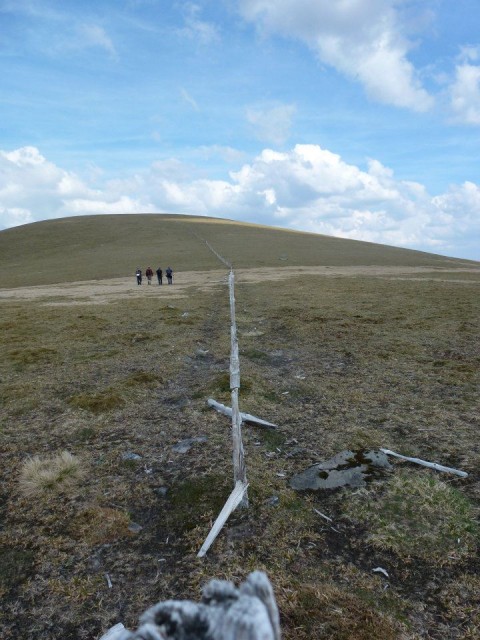 On our way to Creag Meagaidh 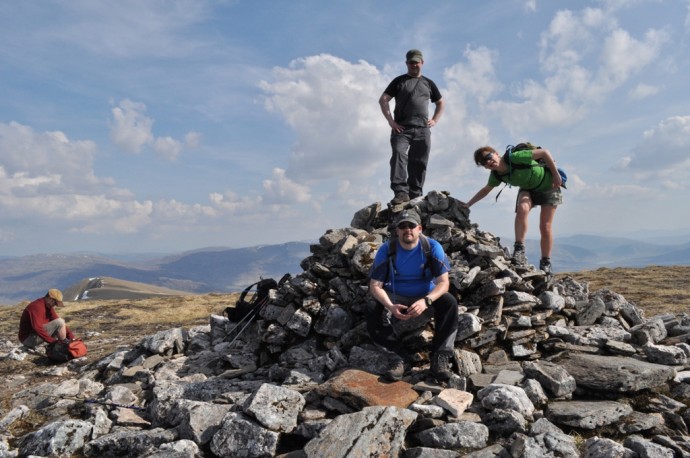 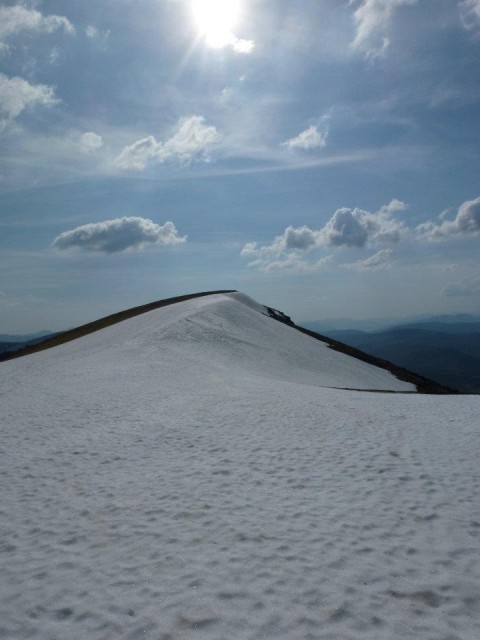 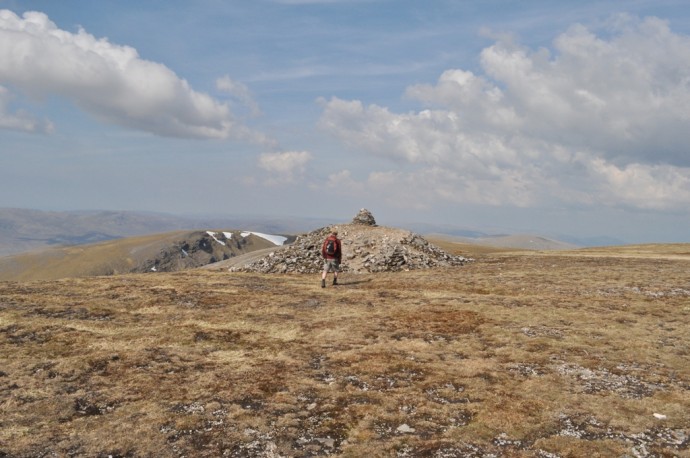 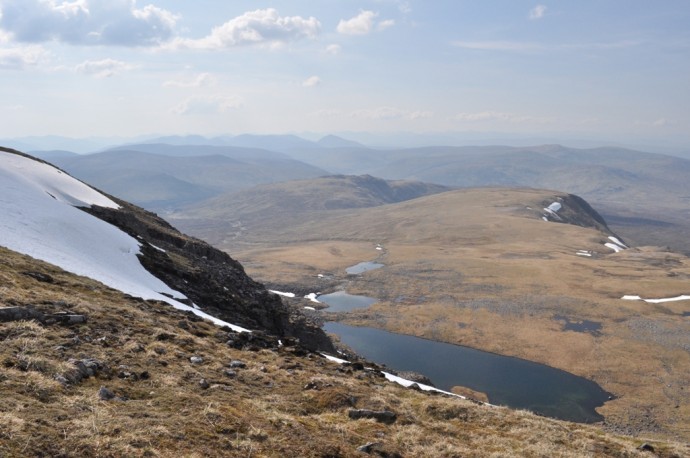 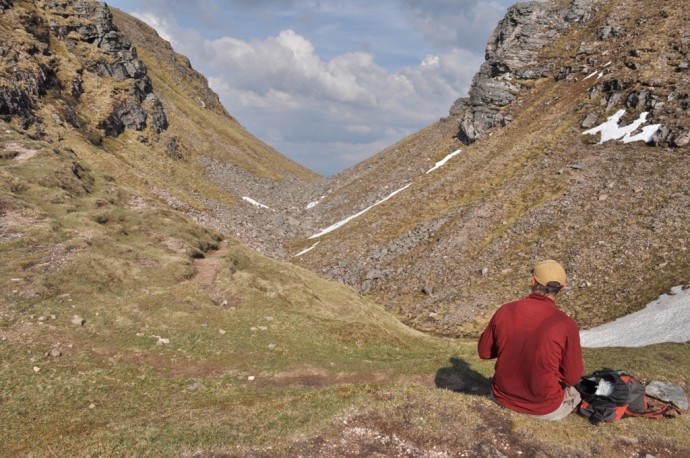 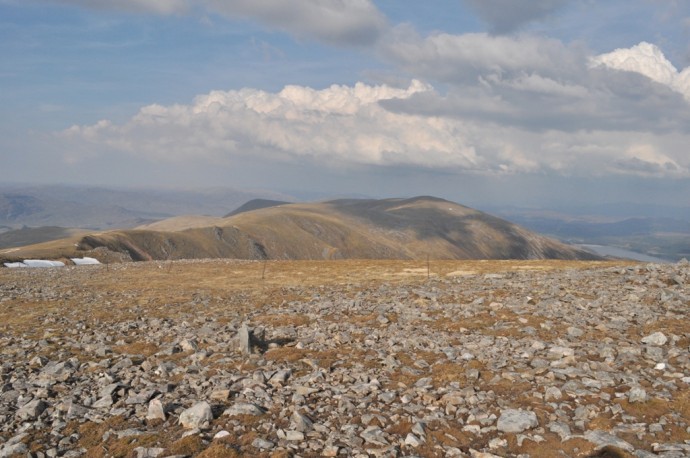 Still a long way to go Looking back to the window & Creag Meagaidh On the walk out


Laggan 5.gpx Open full screen  NB: Walkhighlands is not responsible for the accuracy of gpx files in users posts

rapidly seems to be expanding

Enjoyed your report and some lovely photos; glad you didn't post the 500 you all took!!

What happened to your lime green mankini, Jonny????

A epic in some sweltering weather

Can't moan too much about the heat or the rain will come back- sshhhh!
Cheers.

Taking it easy though

.....some of us cycled the A86 stretch rather than drive

Looks like you all had a cracking day my friend,that mid week sneaky peek club is growing by the walk,need to throw a "sicky" & join you all.

Me & "stretch" did Beinns Teallach & "a Chaorainn in some what diff conditions than you had mate,"clagged in & up to our ****s in feckin snow,but still enjoyed.

great report Jonny, hellish warm day for dragging yourselves up there, beautiful photos of a cracking day out

Summed up nicely one again Jonny

What a great day we had

, dehydrated and starving by the end but none of that matters, it was magic!!

Can't believe it took us 12hrs, inappropriate behaviour and gratuitous photography takes up more time than you think!!!!

I loved that all the boys thought it would be a good idea to fill their hats with snow to cool themselves down even though they saw the others screaming 'brain freeze!!!'

Oh apart from Mr No Hat Andy- he took a more direct route to his brain and stuck the snow.....

Whereas this old dog went for a full body cooling method!!! Magic!!! Were you aware that there was a 'well man' clinic taking place that day? As for Andy's panties, did you not notice the pair he had on when he was getting changed at the side of the road? They were from that well known 'Emperor's New Clothes' label!!!!

Once again Jonny thanks for looking after your subjects XXXX

A great hoof on a perfect day

SusieThePensioner wrote:
What happened to your lime green mankini, Jonny????

Not enough sun cream between us

Cheers Pigeon. How was Bynack More heading there at the weekend. Taking my son & his pal. Hoping to camp near the summit

Can't moan too much about the heat or the rain will come back- sshhhh!
Cheers.

rockhopper wrote:Great weather for it jonny - looks like you all had a cracking day

Taking it easy though

.....some of us cycled the A86 stretch rather than drive

Aye taking it easy. We're not as hardcore as you RH

gammy leg walker wrote:Looks like you all had a cracking day my friend,that mid week sneaky peek club is growing by the walk,need to throw a "sicky" & join you all.

Me & "stretch" did Beinns Teallach & "a Chaorainn in some what diff conditions than you had mate,"clagged in & up to our ****s in feckin snow,but still enjoyed.