Due to some rare conjunction of the planets, the weather forecast was Set Fair and both Andy C & myself had sufficient free time for a long day on the hills

. We opted for an attempt on Ben Lui, plus Donald Duck’s other three Tyndrum Munro nephews, Ben Oss (Huey), Beinn Dubhchraig (Dewey) and Beinn a’Chleibh (Phooey). This was an ambitious day out by my standards, but I’d read Paula H’s lovely walk report on the website which made it sound do-able, and with an early start and the advantage of the excellent weather, we thought we might manage it.
Rather than a traverse involving two cars and missing out on the best bits of Lui, we opted for the circular route from Dalrigh as described by Paula H (and also in Steve Kew’s “Walking the Munros” Cicerone guide).

our_route.gpx Open full screen  NB: Walkhighlands is not responsible for the accuracy of gpx files in users posts
On setting out from the Dalrigh car park, Ben Lui was already visible, keeking out enticingly from round the side of Beinn Dubhchraig: 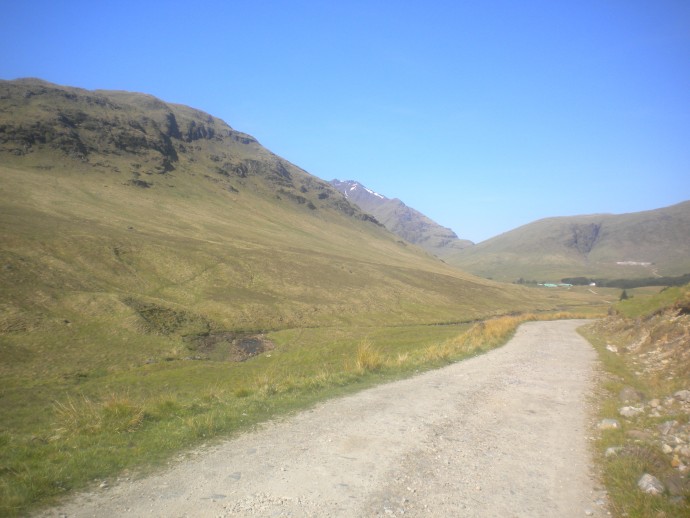 A bit further up the road, almost at Cononish Farm, and Ben Lui had taken centre stage: wow! 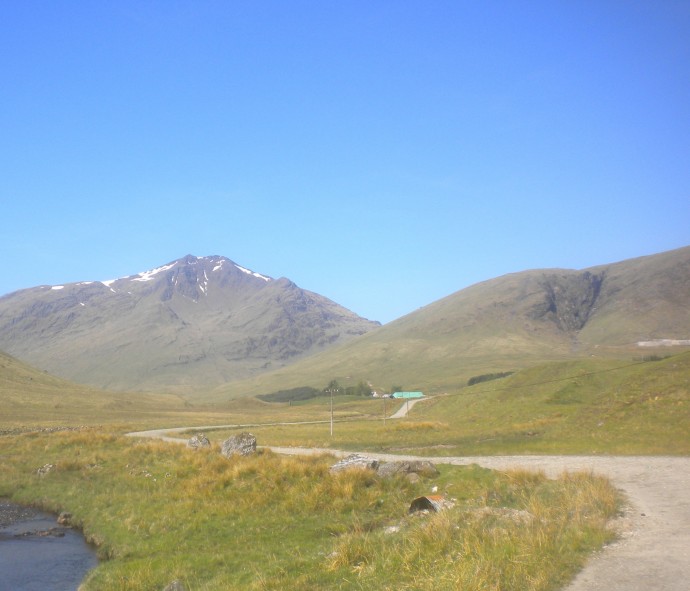 There is much written about the “unsightly” gold mining operation at Cononish but it didn’t look too bad to us – maybe partially overgrown now? We did keep an eye out for any huge gold nuggets, speculating as to whether only one of us would make it back (“It was tragic, Your Honour – he just plummeted – the last thing he said was, “You take the nugget”..."). However, nae luck. Perhaps best all round.
Coming to the end of the track, we crossed the Allt an Rund easily (the prolonged good weather probably helped) and started the funsome climb up into Coire Gaothach, along the right-hand side of the Allt Coire Gaothach which is a pretty wee burn. The scenery just kept getting better, with the corrie’s headwall looking rather intimidating: 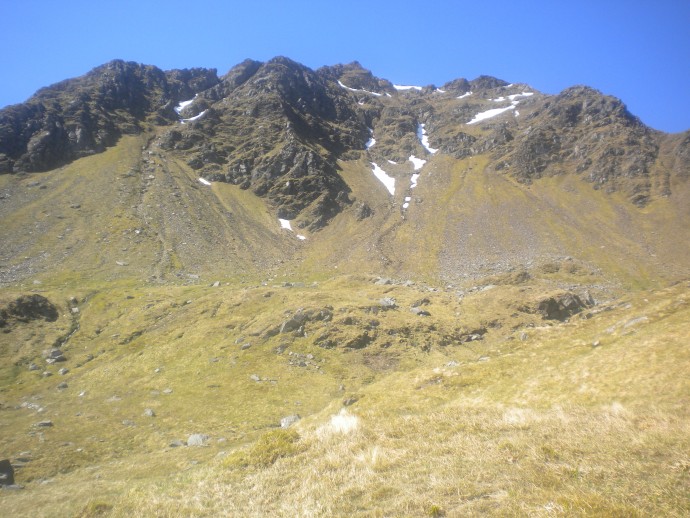 Fortunately there is no need to tackle this: from a total of four possible routes up this side of Ben Lui, we opted for the “standard” ascent route up the NW arm of the corrie rim. A cairned side-path heads off right from the main Coire Gaothach path a bit before it crosses the Allt Coire Gaothach, and this aims for the “notch” on the right rim of the corrie just south of the rocky lump of Stob Garbh. 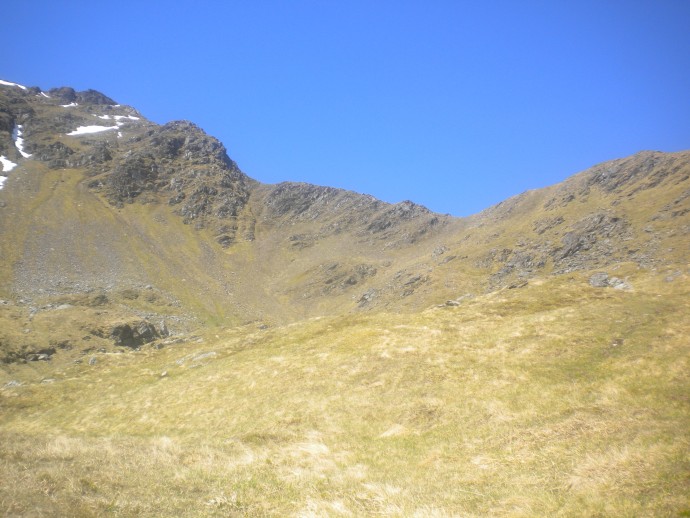 The path up to the corrie rim is moderately steep but never difficult. On reaching the skyline of the corrie’s NW arm, there was another “wow!” moment, as the view to the northwest suddenly opened up, with Beinn Cruachan being particularly prominent: 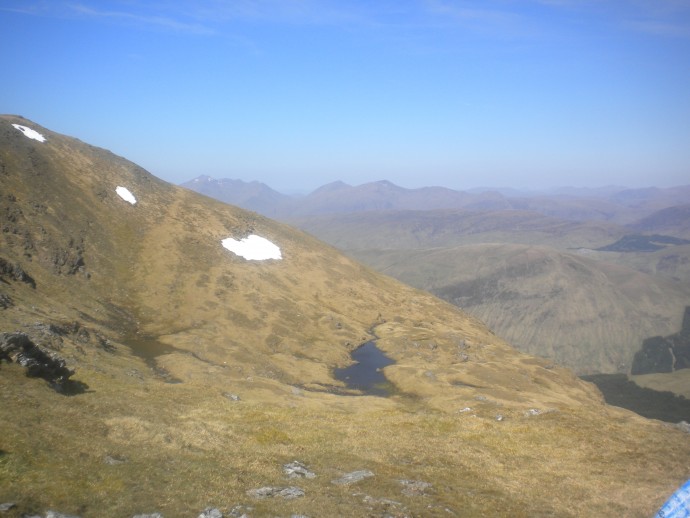 Disappointingly, despite the Donald Duck references in this area, there was no sign of the large blue duck marked on the Ordnance Survey map at this point

. We did however see a Funny Looking Bird that was definitely not a duck – we hotly debated whether it was a ptarmigan or a male grouse – unfortunately it moved off just before we could take a photie.
We headed off up the ridge – a fantastic route, and undoubtedly the highlight of the day. Despite a bit of exposure, the path is never too steep or too scrambly, and makes for a very exhilarating stroll: 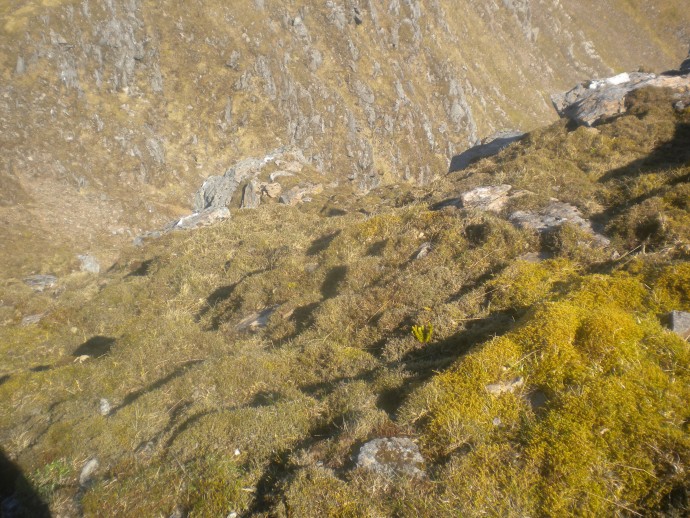 It looks steeper looking back down, but this is a bit deceptive; I certainly found it perfectly manageable and I’m unequivocally not a Hardened Man of the Hills. 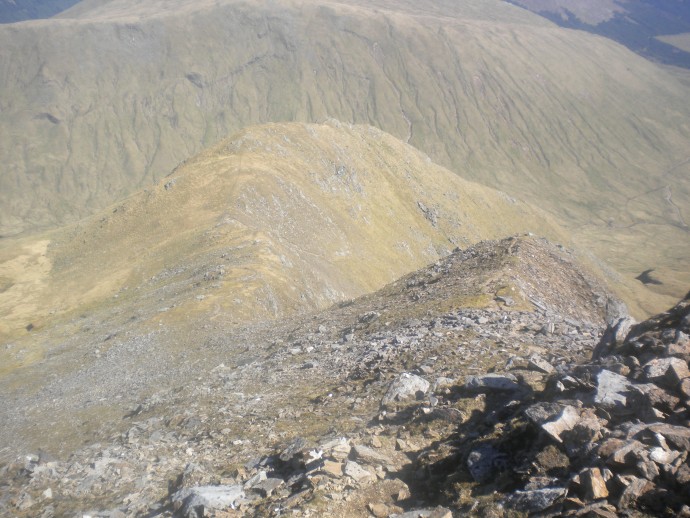 With surprisingly little ado, we arrived at the first cairned top of Lui’s NW top (formerly a Munro top but now demoted), and very quickly thereafter, Ben Lui’s main summit. More stunning views! Admittedly somewhat spoiled in this photo by me plonking myself in front of them: 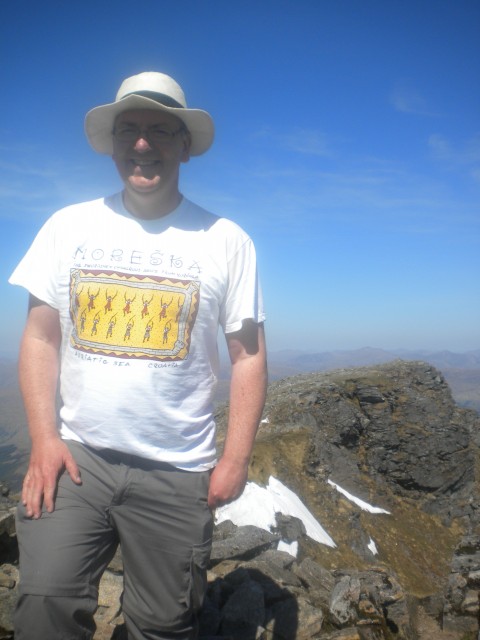 As you can see, I had eschewed my eponymous Toorie Bunnet in favour of an equally dubious sun-hat for this outing.
From about a third of the way back from Lui’s main summit to the NW top, a path cuts down to the southwest in the direction of Beinn a’Chleibh. This is currently the third smallest Munro of all (after Ben Vane and Ben Teallach) and very much an afterthought to Ben Lui, but it actually looked more distinguished than we had expected in the sunlight, with impressive crags to its north above Fionn Choirein: 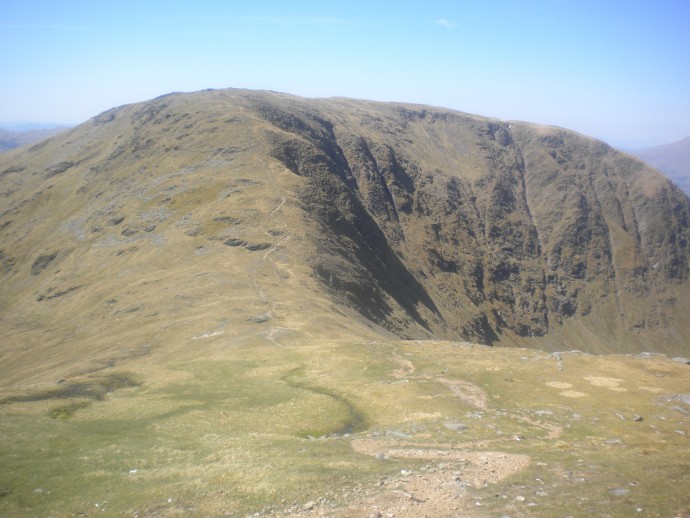 The stoat down to the bealach and back up to Beinn a’Chleibh’s rounded summit didn’t detain us too long, however, and soon we were at the summit cairn: 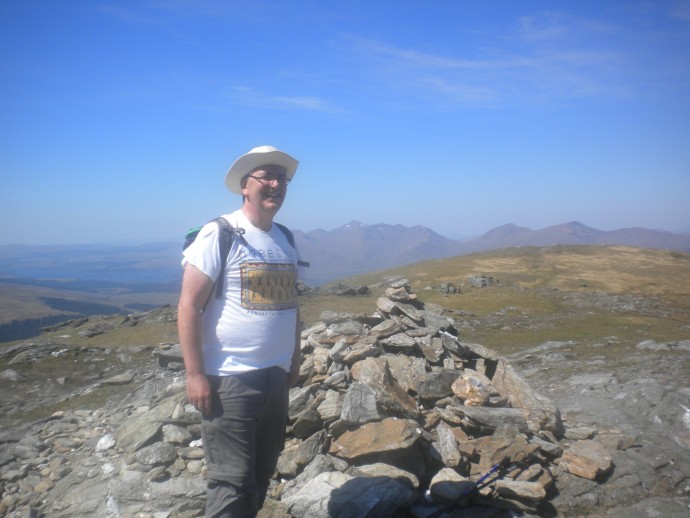 We backtracked back to the bealach, and then re-ascended the western ridge of Ben Lui for a couple of hundred metres or so, as recommended in Steve Kew’s Cicerone guide, which took us to the top of a small burn that runs down the right-hand side of the Ben Lui path (as viewed from the Lui/a’Chleibh bealach), thereby avoiding some rather awkward boulderfields. We then started the long traverse around Lui’s southwestern flanks to reach the Oss/Lui bealach. This is almost entirely off-piste with only a very occasional vestigial path, and was probably the most challenging part of the walk – partly because the views ahead are obscured by Lui’s rather convex SE ridge so that it became very difficult to estimate how far we had come and how far we still had to go to the next bealach. In compensation, the terrain was easier than we’d expected, and there were excellent views downhill across an impressively desolate moorland.
After what seemed like quite a while, we found ourselves a bit above the Oss/Lui bealach with some very nice views of Ben Oss ahead: 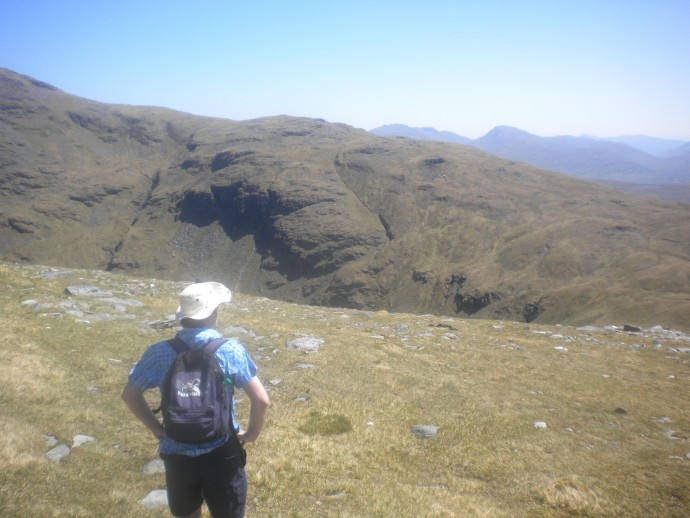 The next bit was also quite a slog. Although we picked up a path at the bealach, it was faint and intermittent, and finally disappeared (presumably from sheer lack of enthusiasm) halfway up the south ridge of Ben Oss. I was pretty knackered by now, and hauling myself up the pathless, bouldery and surprisingly steep summit dome of Ben Oss proved fairly painful. 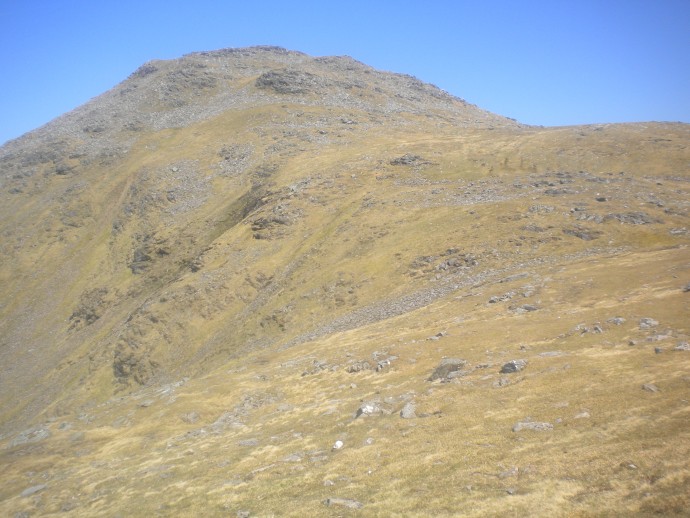 It was with considerable relief that we reached the summit: 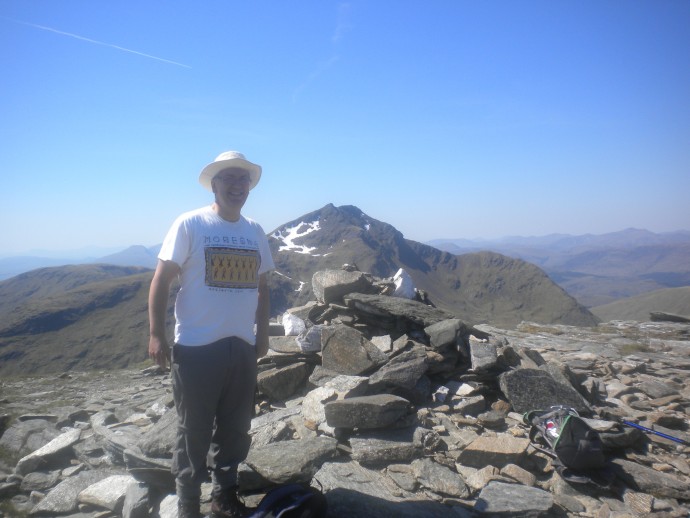 There were yet more spectacular views across Coire Garbh and Loch Oss towards Beinn Dubhchraig, our last target of the day: 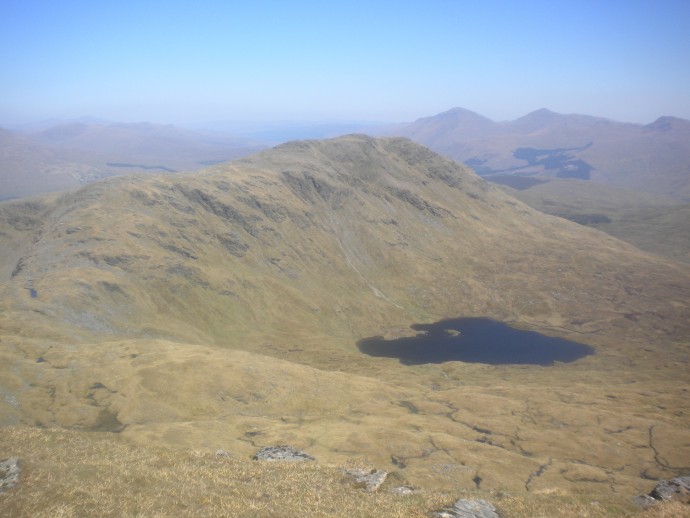 We paused for a good long rest and late lunch-break on the top of Ben Oss, then set off much refreshed. Fortunately, as would be expected given that this pair are usually bagged together, there is an excellent path from the summit of Oss down to the Oss/Dubhchraig bealach and all the way on up to the summit of Beinn Dubhchraig. Once again this proved an enjoyable romp, and we were at the top of Beinn Dubhchraig a lot quicker than I’d expected: 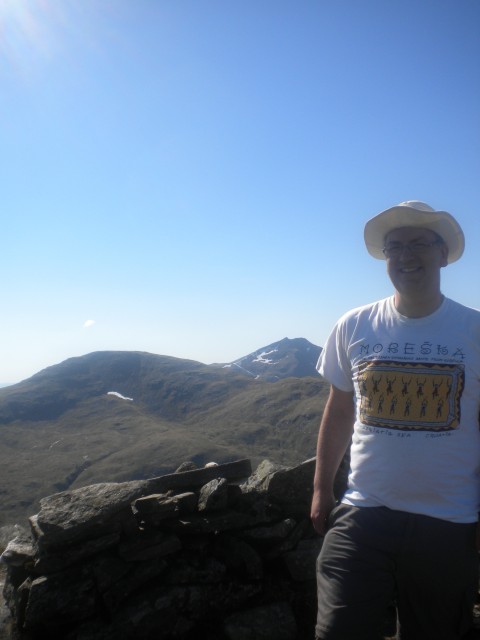 Nice views back across Coire Garbh to Ben Oss: 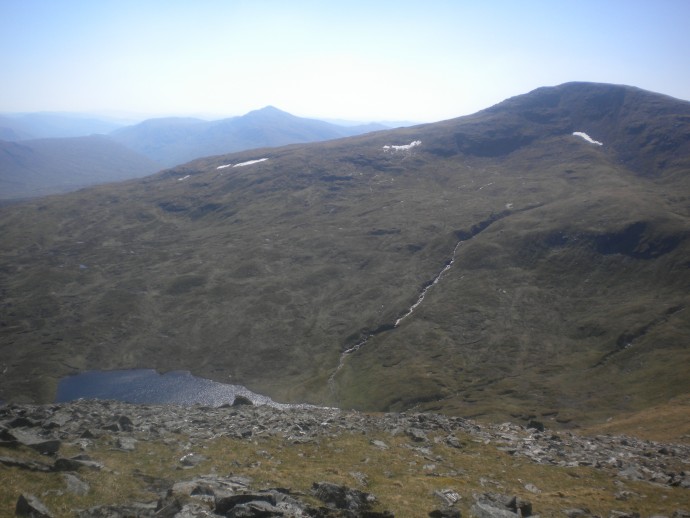 Although it was fun, the descent of Beinn Dubhchraig back down to Dalrigh took us much longer than we anticipated. The descent path from just before two pretty wee lochans on the NE ridge of Dubhchraig is virtually non-existent at first, being marked just by two cairns. However, after descending steep grassy slopes for a couple of hundred metres or so (some adventurous bum-sliding on Andy’s part – I believe the approved term is “glissading”

– I was more cautious though having just bought a new pair of hillwalking breeks), we saw a clear path off to our left on the far side of a stream, the Allt Coire Buidhe I believe. This initially gave a very enjoyable romp home, with the stream showing off its tumbling skills rather impressively. There were nice wee pools and waterfalls: if it hadn’t already been such a long day, this might have been a tempting spot for a paddle or a dip to cool off. Eventually we got down to the treeline, at first just standard Christmas Tree coniferisation, but lower down comes a real treat: the Coille Coire Chuilc, an ancient woodland of Scots pines and birch trees that is an enchanting and magical place. Unfortunately the footpath becomes a bit of a morass at times: even at the end of a prolonged dry spell (which probably won’t happen again in Scotland for another thirty years or so of course

), we still encountered some significantly swampy bits. We were also quite footsore by now, and after a good hour of the Coille Coire Chuilc we were beginning to feel that we had perhaps been Enchanted Long Enough. It was something of a relief when we finally emerged from the trees to follow the path across a final and particularly vicious bit of swamp to pick up the landrover track crossing the West Highland railway line (by means of a wee footbridge) and then quickly back to the car park.
It was a long day out – it took us eleven hours, admittedly including two fairly leisurely refreshment stops. However, I’d definitely recommend this as the best way of bagging this group: Ben Lui was clearly meant to be climbed via Cononish (why insult it by climbing it from the west, which is not its best side?), and this round adds in the awkwardly placed Beinn a’Chleibh with minimum fuss, while making a natural return circuit out of the long S-shaped ridge of Beinns Lui/Oss/Dubhchraig. Sore feet, but well worth it!

Excellent round bobble hat. We were baking over on Beinn a'Chochuill and Beinn Eunaich yesterday – not sure I would have managed these four in that heat!

madasa mongoose wrote:Excellent round bobble hat. We were baking over on Beinn a'Chochuill and Beinn Eunaich yesterday – not sure I would have managed these four in that heat!

Aye, it was hot all right - can't complain though

- it's not often we see it like that. Once we were up Lui the route stayed fairly high for most of the way, so that helped a bit - plus I was slathered in Factor 30 of course

Really good report, looks like you had a stunning day for it. I'm planning on doing these hills in June when i'm up in the Loch Lomond area for a few days, so I think i'll use your route!