This was the Day!!! Ben Avon has beckoned me most of my adult life.... I've always been put off by the "oh its a long walk in etc" and thought I'm not fit enough, its gonna be tough etc etc.

However, tis was to be munro No. 50! worthy of a challenge! and a celebration!

We left sharp at 7a.m. beautiful morning, knew it was going to be a hot one! Champagne was chilled overnight....yup it was worth carrying that bottle!

Set off at 8.30a.m. checking the map frequently as we went up the road past the Keiloch cottages (reminding me of days gone by, of the people that lived in theses cottages, the parties we had!! 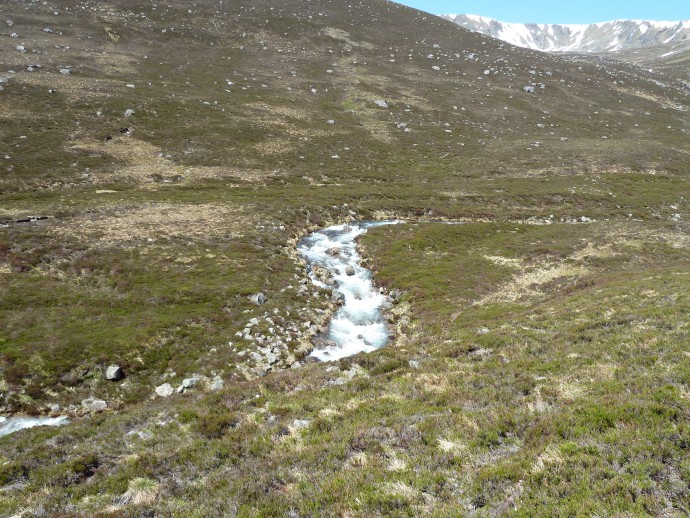 The route for the Slugain is well signed by the "Scottish Rights of Way" wee green signs, so hard to go wrong! There were a fair few bikes went past us, Only to slow right down as the track got steeper an more ardeous, we wondered if it was worth the effort ! However, walking with dogs, bikes aren't an option, a walk is a walk!! Crossing the various burns wasn't as easy as would normally have been, due to the rapid snow melt, even the tiniest burn was in spate, By the time we got to the last burn it was boots and socks off...... That was where we met lovely Billy, the Kidd! 67, from Falkirk, and was more like 37! a real charmer, who asked if he may join us, what a gentleman!! Loved the way he filled his hat with water and poured it over his head... just like in the cowboy movies!! We began our climb, whch I have to say, was very easy, straightforward path and didnt seem long before the huge plateau opened up.....and I mean huge!!! wow!! views were stunning! Beinn a Bhuird was beautiful! lovely to see it from "the other side" We climbed the Torrs, helped by Gentleman Bill, and I got out my bottle of Veuve Cliquot! A well photographed bottle of Champagne!! on the Torr we met another couple, the older guy had only 13 munros left to climb!!! Well impressed!! Decided not to open the bottle just yet, best keep a level head till I was on firm ground, balance already compromised .....without champagne! We sat and popped the bottle, listened to Bills stories and laughed as the bubbles kicked in!! everyone on the top was in good spirits, and it just felt like a right party!! have to say, I didnt share with the whole hill top, I carried the darn bottle, so it was for me, my friend and Bill our new friend!! We stayed on top for a good while, enjoying the sun, resting the dogs and feeling very content. A couple of guys appeared and the news further down the hill had spread that there was a party up top!!! so I was congratulated again! Its funny really..... its only 50! but somehow, I wanted to celebrate!! what will I be like when I reach 100??? Time was taken for photographs on the way back..... I HAD to go lie in a patch of snow!! I have been happed up in that red jacket for months, its in every darned photograph! and to lie in the cold snow in bare skin was FUN!!!! Anyway, time to get a wriggle on, we had a table booked for dinner at the Italian in Ballater for 8.30, and suddenly time was wearing on!! Feet starting to hurt, my big toe nails are terrible black with such a lot of walking lately, they really need time to recover..... don't have time to let them recover!!! too many hills to climb!! however, we got to the water again, and it was a welcome crossing in bare feet, I swear you cold see steam rise up (really?) back to the ruin at Slugain, where lovely Bill retrieved his bike..... he also relieved me of my empty bottle which was nice of him! we bid him a fond farewell. Around this point, I began to think, biking in maybe wasn't such a bad idea! My toes hurt, I was trying to compensate, and a blister appeared, I had sore sunburn and my rucksack straps were starting to rub.....oh for a bike!! However, the pleasure of walking with our dogs outweighed the "freewheel" down to the carpark, it simply would not have been fair, they were already dragging their paws!! Wow I want to go out walking with you guys!!! You are fun people!!!

Great report. Ben Avon is my ultimate dream. One day, One day!!

Congrats and well done on number 50

Now, I know what to do with that bottle of Moet in my kitchen that's been collecting dust since Christmas!! Just got a lot of hills to do first!

Well done and congratulations on your 50! Looks like you had a cracking day! It's always a nice feeling to reach a certain number - like a milestone. I hit my 75 on Saturday (on Sgurr na Ciste Duibhe) but didn't really celebrate it, just carried on to the next Sister

We haven't climbed Ben Avon yet. Just YET. For us, it's a long drive to Deeside from Inverness, I wonder if it is possible to climb this mountain from Speyside... Would save us some money on petrol.

the dogs look quite knackered in the heat. a wiz up Culardoch and Carn liath on friday and wiz thinking i could tackle Ben Avon using this route as it looks like less burns to cross.

be interested to hear if any one has done Ben Avon this way and how long it took. Culardoch was 3 hours or so and i was thinking mibee another 2 hours.

It is a stunning mountain indeed

A very entertaining report, an insight into the fun mentality we should all share

Cheers for the smiles raised

Hey BP.... Any excuse for a party! But I won't be making a habit of carrying champers up mountains (hip flask is good! Lol)

I believe Ben Avon can be done from Tomintoul, but is 24 miles (instead of our 21.5) but I guess if you cycle in? Pocket Mountains The Cairngorms little book describes the route that way.

Nice one! I hope those dogs were well-behaved!

...But of course they were well behaved!!! Would I seriously photograph dogs with feathers and Hare fluff hanging from their chops? No animals/birds were harmed in the writing of this Blog!

I was on Beinn a Bhuird the same day with my four dogs what a scorcher, we walked in from the Linn of dee and was going to take in ben avon too but it was just to far in those temperatures, iam now all packed for tmm 05/06/2012 weather dosnt look that bad.

Excellent! I was up on the north east end of the Ben Avon plateau the following day leading a Silver Duke of Edinburgh training expedition, sadly without a bottle of VC! We were at the Tors around Mullach Lochan nan Gabhar and I wandered over to get a picture of Clach Choutsaich and Leabaidh an Daimh Buidhe.

This was one of my Munro highlights back in August 2010 when I did it with Kevsbald and CurlyWurly after walking in over Brown Cow Hill from Cock Bridge on the Tomintoul road. The walk out along Glen Slugain to Invercauld just about did for me!

There sure is! See my report http://www.walkhighlands.co.uk/Forum/viewtopic.php?f=9&t=6824 as well as the follow up Part 2 which was Ben Avon itself and Beinn a'Bhuird.