A White Introduction to Bagging + a couple of mishaps!

A White Introduction to Bagging + a couple of mishaps!


Well better late writing this report than never I guess!
A bit of a late decision to go as the weather was looking bad earlier in the week, however it all fell into place and was happy to be accompanied by my 2 younger cousins Cally and Luke looking to bag their first and second munro's respectively!

I led the way from sunny Aberdeenshire and with magnificent views of the white tops around I was really looking forward to getting out once again! We arrived at the car park just south of Sean Spittal's Bridge at around 9.30 having left Luke's car at the end of the walk to make the most of the 2 car trick, greatly shortening an easy 4 munro circuit.

We were all set and off by 10am following the established path towards Carn an Tuirc. The path got a little boggy and unclear at times but we were glad to see that at there wasn't much snow so we made do and pushed on towards the summit. The weather was glorious at this point and without the wind we would have been even too toasty!

We arrived at the summit at 11.15am and stopped in the now cool wind for the usual summit photos. Cally was particularly happy as this was his first munro! Me and Luke at Carn An Tuirc

The going got a little more tough once we reached the snowline. It was making for a very interesting experience for us inexperienced baggers! At least the weather was good and we were lucky enough to avoid any snow showers! We reached the top of Cairn of Claise at noon. 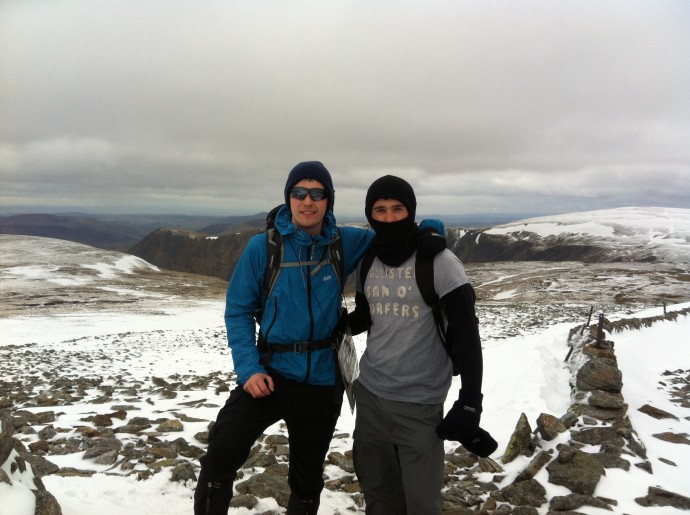 Me and Cally at Cairn of Claise

A quick food stop and we were back on our way. Following the fence line made for easy going however a stop at the bealach indicated we still had a way to go through the snow. Looking on to Glas Maol Me on the way to Glas Maol

The snow was knee deep in places making it a bit more difficult but the views of the snows around and on to Lochnagar were fantastic! We reached the summit of Glas Maol at 13.30. So on to our final and most difficult Munro of the day Creag Leacach. Looking on to Creag Leacach

The snow soon disappeared on the descent of Glas Maol so we thought this an ideal opportunity to take in more views and get something to eat.

It wasn't until we were just about to start the ascent of Creag Leacach that I realised I had left my map a couple of hundred metres up where we stopped for some food! Big mistake! I'm sure the colour of my face in the Creag Leacach summit photos show how hard I ran up to go and get it! After that minor setback we summited at 1440. The final descent was steep and the path through Allt Coire a' Bhathaich was badly eroded and missing in places.

So here's for the second mistake of the day... We got to Luke's car at about 10 to 4, to find he'd left his car keys in my car! Back at Sean Spittal bridge car park... Gutted... I was in a rush to get to Glasgow for a night out, and as it was my car up the hill, I was quickly elected to go and get my car

I ran back up the hill, past the ski centre down to the car park and got there just after half past. Not bad after 10 miles I thought! Special thanks to the 30 people who drove past me and never stopped...

I guess the run did me good anyway with my lack of physical activity since breaking my arm. Every cloud has a silver lining. And I'll never make that mistake again! A nice day on the hills with some great company, and I still made it in time for the Champions League final!

Re: A White Introduction to Bagging + a couple of mishaps!

So pleased that you posted because I'm intending to take in these hills and the other two at the back very soon.

As for your mishaps......I think you'll find many many people on this site have done the keys in the wrong car trick. Oh and the leaving things behind you at a lunch stop is an essential part of being on the hills!!!

Looking forward to your next report!

Re: A White Introduction to Bagging + a couple of mishaps!

You missed the The Big Final then

Well done on getting the four in one day