Hottest day of the year so far forecast, cloudless and little breeze. Extra weight of an additional litre of water and helmet and harness - all of which came in useful. Even a lazy 10am start, by which time it was already very warm, from Sligachan could not detract from what is, I think, a rather pleasant walk up to the lochan in Coire a Bhasteir, from where we got our first good view of the route up to the bealach. The route from the lochan to the bealach

Having stupidly got burnt back and shoulders working out of doors on Friday, I was staying covered up from top to toe, which, in the heat, provided a little purgatory of its own - but a quick dunk of the head in the stream flowing out of the lochan was a pleasant relief.
A steady trudge up the track, increasingly scree, got us up to the bealach - and still no shade or breeze to provide relief from the blistering sun: my long trousers/sleeves rolled down/floppy hat combo attracted a couple of puzzled glances from super-heroes in shorts and T-shirts. 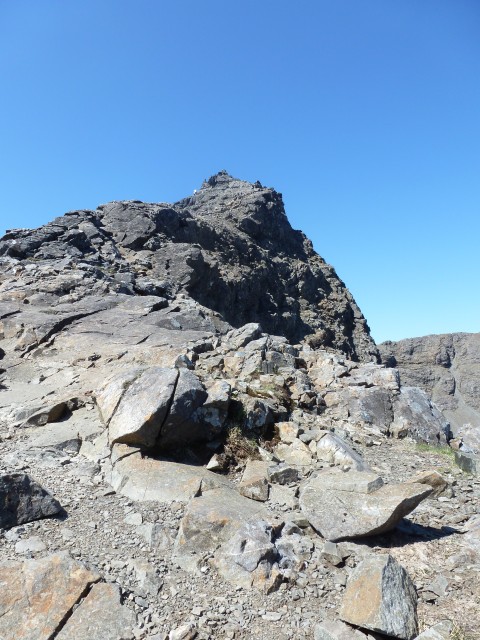 The view up the ridge from the bealach to the summit

The ridge is actually broader and less steep than I was expecting and we made quick progress, sticking to the crest, up to the Bad Step. Now, Mark, my scrambling partner and Cuillin guru, is a bit of a purist in such matters and insisted I at least attempt to down-climb, with him belaying me. Helmet and harness donned, down I went. Being 5' 6" on a steep little wall that calls for a good long reach and where the holds are hidden below undercuts made it slightly "fun" - but I managed without any slips or scrabbling. .....another party faffing about on the Bad Step, seen from above.

The ridge steepens slightly from this point to the summit but it's never a knife-edge so some more pleasant scrambling led to the lovely little summit. And the sun was still beating down and still no breeze. But the views were worth every sweaty inch of ascent. ...the view due south to Loch Scavaig and beyond...

Climbing back up the Bad Step was certainly easier than the down-climb but we took our time getting back to the bealach. On the way up, Mark had "adopted" a couple humming and hahh'ing at the Bad Step - this was the man's third visit to the Bad Step but he'd never crossed beyond it so Mark, who's got his MLC, lent him and his partner the end of our rope and managed to get them to do a proper down-climb.........the bloke's grin was a day's reward in itself.
Back at the bealach, I was feeling quite pooped by the heat by now and conscious of rapidly-depleting water stocks so I declined Mark's suggestion for a quick dash up and down Gillean's west ridge (it'll still be there in a couple of weeks' time, I reckon). We retraced our steps back down to the lochan and thence to the path by the Allt Dearg Beag, with the sun still beating down from a cloudless sky.
The temptation of those pools was just too great. We found one which was large and deep, with a waterfall and some sun-soaked slabs for a beach. The water was cool, not cold. It was 15 minutes of sheer bliss, swimming and diving in deep clear water. I dried in seconds in the sun and it was a pleasant walk back the Sligachan Hotel - and a long cold drink.
Final comment. I have no great head for heights (so what are you doing on the Cuillin Ridge? I hear you ask) so am 'sensitive' to exposure......but all I'm saying here is that the Bad Step does not feel exposed. Don't take my word for it - try for yourselves. Even if you do have to turn back at the Bad Step, it's unlikely you will have been spooked at any point up to there......and it will have been a good walk in spectacular surroundings. .....the view west over Sgurr a Fionn Chore to Bruach na Frithe

Re: Am Basteir - too darn'd hot

what a difference! when we were there a fortnight ago there were inch long ice crystals and we were in down jackets and two pairs of gloves!