Arrrived in Fort William on Friday 25th May, having taken the day off work some time ago when we decided as a group to climb the ben. We stayed at the Clan McDuff hotel on the southern outskirts of Fort William and proved to be an excellent base for everyone.

The weather was absolutely amazing (31 deg C in F W) and so we stocked up with plenty of liquid as we were sure to need it. The view up Glen Nevis First view of the upper slopes Our first stop for refreshment

We soon left the crowds far behind us and made good progress towards the CIC hut. However, about 200 meters short of the hut we decided to cross the Allt a' Mhuilinn burn (which was running well with snow melt) and head straight up the slopes of Carn Dearg Meadhonach. It was tough going although the ground, vegetation and rocks were dry and gave good reliable grip. We eventually reached the ridge and soon after the Munro top C D M. We were shortly followed to the top by another chap who had taken a more westerly route up the steep slopes. I had already drunk a lot of liquid and took the oppotunity to refill my bottle with some of the snow from a cornice (keeping my feet on terra ferma). My plan was to reach the summit of Carn Mor Dearg by 2pm and we did just that. The Ben in all its glory

Views over to the north face cliffs of Nevis were absolutely superb with snow filling the gullies and giving a great definition of the rocky outcrops. However, it was very disconserting to see so many on the Ben get so close to the edge of the cornices. It made us quite uneasy. We decided to have some food and spent about half an hour soaking in the views all around us. Looking back to C D M There was an intermittent breeze as we set off along the arete. Andrew led the way, making good progress along the very rocky and undulating ridge. It was good to get my hands on the rocks. We followed the actual ridge as much as possible and I thoroughly enjoyed it. It does get narrower towards the climax of the ridge and a short stretch with big drops to either side proved to be an adrenalin rush for us both. On the C D M Arete Still a climb to do ahead The final slog up the boulder field to the summit was briefly broken when I met a walker coming down. We passed pleasantries - he lived in Cambridge, I lived in Appleby. Funny thing was, it turned out he had roomed at college with a lad who was in my class at school - its a small world!! 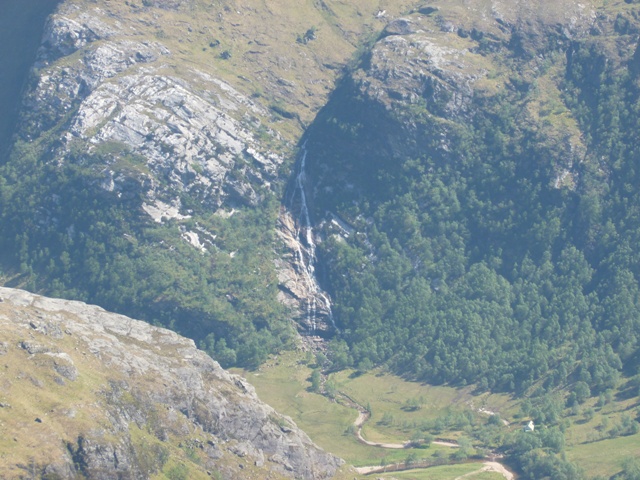 Reached the summit of the Ben to be met by a blanket of snow but almost everyone there was wandering around in t-shirts. 360 degree views were spectacular. On top of the world

Easy to spot the route off the hill with such clear weather. Just away from the top, we reached another area of snow on the west facing slope. It was surreal to see a number of youngsters having great fun sliding down it. Having great fun on the snow

We carried on down quickly to the Red Burn and refilled our bottles again. It was noticeable how the temperature was beginning to rise the more we descended. Soon after we passed the Half Way Lochan, we caught up with the others who had been making good (if slow) progress back down. The youngsters cooling their feet

We had a great day on the highest mountain in the land and would really recommend the Carn Mor Dearg route to anyone with a head for hights.

Great photos - that view into Coire Leis takes me back 49 years as though it was yesterday !