The forecast was perfect, sun symbols the length and breadth of the land. So what to do with such a day? Our choice was, perhaps, not the most obvious one. Why not some epic in Glencoe, or a long tramp over the Cairngorms?
I’d been on Carn Dearg and Sgor Gaibhre before on a day of wind, cloud, rain and had always felt cheated of what should, I guessed, have been a wonderfully extensive view. Today would be the exact opposite. Hours of lazy contemplation of the surrounding hills whilst dawdling up and down the gentle ridges surrounding Coire Eigheach. Call me past it if you will, I prefer to think of such choices as showing the wisdom which comes with age

So it was up early for Carol and me, round to collect Dan and off on the tortuous drive along Tummel and Rannoch. Mist lay in the valleys and it was an eerie scene that greeted us as we parked by Loch Eigheach. We heard rather than saw the geese taking off from the lake and the roaring of the stags. A more mechanical sound alerted us to the departure of the morning train from Rannoch station. Across Rannoch Moor the Blackmount was glorious in the soft morning light. The moor itself was invisible under the mist which we had now risen above into a landscape luminous with the palette of Autumn. 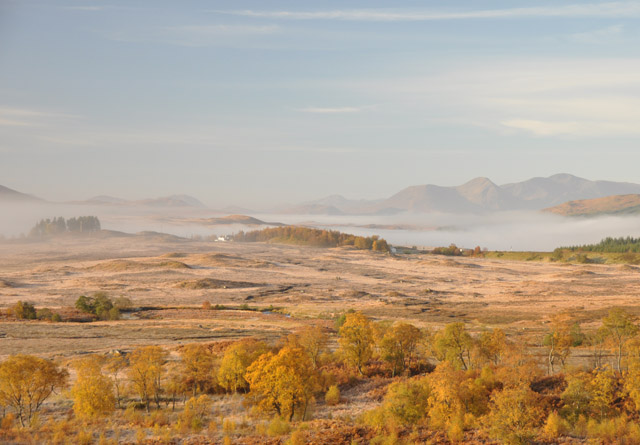 Ahead our chosen hills swelled gently out of the moorland. We crossed the Allt Eigheach, followed the ‘Road to the Isles’ for a little while longer, then branched off up the slopes towards the first little top on the ridge. The ascent to this first top on the ridge was a slow process, the temptation to stop and enjoy the ever expanding views proving overwhelming. No rush anyway, the plan was to descend in the last light of the day so we had plenty of time. The ridges to Ben Lawers


We finally arrived at Sron Leachd a’ Chaorainn – just the place for morning coffee we declared. After a lie in the sun and some more photos we roused ourselves to tackle that gentlest of ridges leading to Carn Dearg. Corrour Station dwarfed by the Aonachs Onwards and (ever so slightly) upwards!

The view North to the hills above Loch Ossian had opened up and by now it was lunchtime, of course. More excuses to sit and gaze around. A lovely view of the Mamores and Ben Nevis (and, of course, Carol!) Eventually we headed off along the easy ridge to Sgor Gaibhre, just the sort of stroll where the body is happily occupied so the mind is free to roam. This time I took to wondering why photographs from days like this can so often disappoint. That remembered array of majestic peaks somehow seems diminished, smaller than our memory of them, a few pixels on the horizon.
I looked around. The North Buttress of Buachaille Etive Mor was, indeed, a tiny speck yet in my mind it grew with the memory of that Easter day years ago when the sun beat down and the rock was warm to the touch. That was with Steve and John, a few hours grasped en route to Skye. Or there’s the top of the Lancet Edge and Geal Charn, a New Year’s day with Andy and Gav after a memorable Hogmanay in the Pattack bothy, now sadly burned to the ground. Then there are dreams of days still to be. The crossing of Rannoch Moor by Canoe I’ve been promising myself, a night or two at Benalder Cottage. Maybe that’s it, dreams and memories, the mind sees much more than the eye. The camera too often simply captures what the eye sees so can easily disappoint. Rambling thoughts but they eased the way to Sgor Gaibhre. The ridge headed south to the last peak, Meall na Meoig (Beinn Pharlagain). The lowest but by far the most interesting. The OS 1:50000 shows a loch draining both ways, the 1:25000 has it right.

Earlier in the walk I’d been checking the map and realised: 868m, a rise of almost 200m from the col – that makes it a Corbett. Another tick. Somehow it didn’t matter. A tick won’t sustain you through the long hours at the work bench. But a memory might, and a dream surely will.
Speaking of memories, we lingered. The sun raced us down and won. There is a magic in such moments. The ridge to Carn Dearg Some beautiful photos there, especially the early and late ones - great light! What a good idea to do this walk from that end - I got the train to Corrour which was fine but made it a bit of a rush! After we'd rushed like mad, especially half way back along Loch Ossian, we realised we were actually going to be waiting a long time for the train and so then slowed down! It's really hard to judge but the penalty for missing the train would have been waiting from around 1630 to 2130!

The first time I climbed them I had to get down for the train. I was supporting a couple of friends doing a charity walk over the 4000's. We'd stayed in the Ossian Hostel overnight and they'd walked out to Dalwhinnie with daypacks so after climbing the hills I had to collect all our kit, get it to the afternoon train to Tulloch where I'd left the car, and then drive round to meet them. All went like clockwork. I was on time, so was the train. Only it was heading South instead of North (not my finest moment for reading timetables!). Nothing for it; I headed South, shared a pint or two with Tom Rigg (then the warden at Loch Ossian) in the Rannoch Hotel, finally caught the next train North and arrived very late in Dalwhinnie. It took me a while to live that one down

kevsbald wrote:The 1st one looks like it's from the 1800s.

I see what you mean. That's the way the light was though - sepia with no Photoshop trickery required at all!

A lot of good weather reports the now

I've still these to do and can't decide whether to do from the train or from Rannoch. Probably the former as Rannoch is one big drive from Skye

Some day out Saturday wasn't it John? Those last few photos are keepers! We got a bit of a late start yesterday and didn't get the fog or mist and then once we got to the ridge over Bridge of Orchy the clouds came rolling by. Luckily they went by quickly and the views returned every so often. Love the report though, keep them coming.

Stretch wrote:once we got to the ridge over Bridge of Orchy the clouds came rolling by. .

We saw them. Looked lovely from where we were

Glad to hear they didn't spoil your day

Paul Webster wrote:
I've still these to do and can't decide whether to do from the train or from Rannoch. Probably the former as Rannoch is one big drive from Skye

Whichever route will be nice if it's a good day. Otherwise (hate to admit it) they are a bit of a plod! The view is superb!

Thought I'd revive this old relic (the TR that is, not the author!

. An absolute belter of a report Mr Burgess - epic prose and stunning photies to grace it too. Thoroughly enjoyed reading it several times for full effect!

This is brilliant - glad you bumped it as I don't remember seeing it before. I had a shock for a moment as I thought John had started posting again. Shame he doesn't post anymore, as his reports were brilliant

malky_c wrote:I had a shock for a moment as I thought John had started posting again. Shame he doesn't post anymore, as his reports were brilliant

I (and doubtless many other long term denizens of this forum) would heartily agree with you there malky!