For some reason, and for the first time, had not researched the route on Walkhighlands before we set off, and instead followed the route recommended by Ralph Storer (100 Best Routes on Scottish Mountains). So Paul, Bill and I parked up in the small car park just South of Kirkibost (546172). It was an absolute scorcher, hottest day I had experienced this year, so after a comprehensive application of sun block we headed off along the obvious LandRover track (WNW) toward Camasunary. 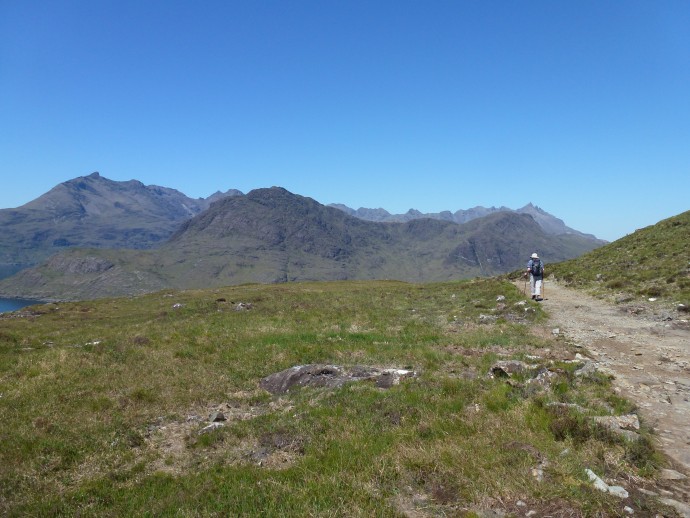 We met a group of 4 and a couple of girls a bit later who had spent the previous night at the Camasunary bothy. Thereafter, we only encountered another 3 people who had been climbing Blabheinn. It was such a clear day, the views were fantastic. The main Cuillin ridge was stunning to the west and Rum and Canna were very clearly visible to SW and other hills beyond.

The LR track drops down a bit as it turns North and we headed toward the Abhainn nan Leac burn, and the attractive waterfalls. AnL waterfall with Blabheinn behind

There is a small cairn and a couple of small blobs of red paint to mark the footpath that leaves the LR track just before a hairpin bend. After a stop at the waterfall we headed off around the path toward West side of Blabheinn. We then realised we needed to be up on the ridge, so we climbed straight up the grass / heather on our right on to the lower part of the route and then followed a path (of sorts) up the ridge. To get above the first promontory, we took the path to the right and then up a steep gully of loose stones and scree. This was quite hard work, but there was no worse to experience all day, and this one was relatively short. Thereafter, the route was pretty obvious, although the path was not always quite so clear. There are several false summits, but the top can be glimpsed from various points and is distinguishable by a small white pole that stands on the west side of the top.

We eventually got there after a few rest stops and a stop for lunch at about 2200 feet. I did not expect to be complaining about the weather, but the sun was unrelenting and the opportunities for shade were almost non-existent, however, it was all worth it as the views were fantastic, View SW to Rum and Canna

........and as always, they just kept on getting better, the higher we went up. There was almost no haze and we could even see as far as Ben Nevis to the ESE.

Although the terrain was a bit uncomfortable, it was not too difficult and we eventually made the top. View to Loch an Athain As I had read that the north summit is slightly higher (by about 3 feet), I decided to pay it a visit. This required a steep descent down a short rock face to a low point before an easy walk across a very short ridge and up to the main sumit. If you dont have much of a head for heights, I suggest you give this bit a miss. I found the descent difficult and it felt very airy as the drops on either side appeared to be a long way down. I considered turning back, but eventually made it in safety and completed the short walk (c 200yds) up to the trig point. I set the camera up for a shot of me atop my tenth Munro On the North summit 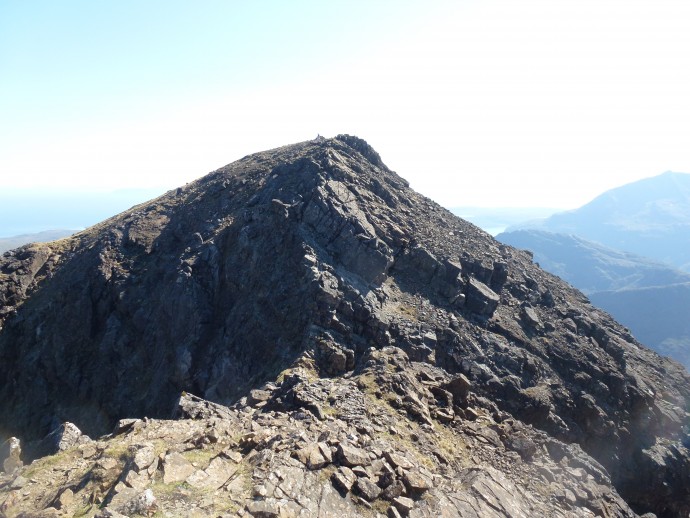 View back to south summit and "bad step"

I actually found it a bit easier on the way back, but avoided looking down. A final shot from the top

We returned much the same we that we went up, the path easier to find on the way down, the only shortcut being a direct route to the Abhainn non Leac waterfall from close to the end of the South ridge. The return along the LR track seemed to take forever, but it was a great day out in great conditions with fantastic visibility. A look back at our achievements

I cannot comment on the "normal route", but if it is a clear day, the views from this route up the South ridge would be very difficult to beat and I strongly recommend it.

What a belter of a day - the sort of day this mountain deserves. Some of the best views in Scotland from up there.

I did it by the usual route from the N side, which I believe is the easiest, and also tops out at the true summit avoiding the need to cross the airy gap from the S summit (being alone I chickened out of going across). Next time I do Bla Bheinn I’ll probably approach from the S side like you did, or if I’m feeling adventurous look up one of the scrambly routes from the SMC Skye scrambles book that I’m dying to get stuck into.

Echo every thing said by HMC. Did this back in March on a cloudless day. Stunning.

In 1965 we got dropped off by the post bus to make our way, as you did, to Camasunary and then onto Coruisk for a weeks stay. The South Ridge on Blabheinn was one of our days out from our accommodation.

Excellent report of a great walk. It'll be no consolation but it was also brutally hot over on Am Basteir last Sunday - nearest I've ever been to dehydration on Skye. Scorchio!
I ascended the south ridge for the first time in early April this year, with a couple of friends, on a cold blustery day with the occasional light snow shower. The rake you used to get down to the little bealach en route to the north top was iced/snowed up after light overnight snow so we gave it a miss and snuck down the steep narrow gully a few metres lower down on the east/Loch Slapin side - less exposure and plenty to hang on to. It can be a bit mucky in the summer or after rain but we found it in good frozen condition. .....the sneaky gully is just about visible on the extreme left of the photo...


Bla Bheinn is still one of my favourite mountains - the variety of ways up and down and the fabulous views (well, sometimes) of the main Cuillin ridge and out to the Small Isles....and living in Broadford makes it a good spur-of-the-moment option for me - but I do have 'previous' with it.
I once twisted an ankle just down from the south top descending the south ridge on my own - it was a long hobble back to the car park at Kilmarie. On another occasion, I got washed off my feet and totally submerged trying to ford the Abhainn nan Leac, just below the waterfall, in spate with February snow-melt - that was a chilly, squelchy solo jog back to the car park!

gaffr wrote:In 1965 we got dropped off by the post bus to make our way, as you did, to Camasunary and then onto Coruisk for a weeks stay. The South Ridge on Blabheinn was one of our days out from our accommodation.

Totally agree - it is very enticing, and on such a clear day, the views just get better and better. The path is not particularly consistent, but the route is pretty obvious once you get up on the ridge.

martyn wrote: The rake you used to get down to the little bealach en route to the north top was iced/snowed up after light overnight snow so we gave it a miss and snuck down the steep narrow gully a few metres lower down on the east/Loch Slapin side - less exposure and plenty to hang on to.

You are braver than me - I would not attempt this bealach in anything but perfect conditions. I think I did see your route lower down; I dismissed it though as I was not confident of an escape. You are very lucky living so close to such great walking country!

Glad you had some great conditions for the views, your photos look fantastic. Being stuck in the office I am desperate to get out on the hills again!

That was brilliant, what a day you got. I'm half thinking of saving this for my final one but not sure if i can wait that long