The weather promised to be good so I headed for Shiel Bridge with the tent early on Friday (16th). The view from the viewpoint in Glen Garry augured well although I did drive through some pretty thick mist on my way to the start of the route up Sgurr na Sgine. I had already done The Saddle so I approached Sgurr na Sgine via Faochag. I had to paddle across the Allt Mhalagain: it seemed the lesser of two evils to get cold feet rather than risk a full immersion by falling off the slippery boulders. But the steep climb up to the summit of Faochag certainly warmed me up. Once over Faochag the ridge narrows and eventually reaches the foot of the path up to Sgurr na Sgine. The summit is at the far end of the rocky plateau. Visibility was excellent with great views all round, including Ben Nevis I didn't fancy another paddle so after returning to the bealach between Sgurr na Sgine and Faochag I descended towards The Saddle, skirted round corrie following an old drystone wall and passed the foot of the Forcan Ridge bealach between the Saddle and Sgurr na Sgine

before heading for Meallan Odhar (these deer looked a bit nervous) It was a cold night (frost on the flysheet, ice on the windscreen) and I forced myself out of my nice warm sleeping bag and was walking up Gleann Choinneachain by about 8.30. bealach between Beinn Fhada and A Ghlas Bheinn The burn crossing was fine (no wet feet this time) and the stalkers path up into the corrie and out on to the plateau was excellent. There were plenty of deer around here as well. Once on the plateau I stuck to the edge with its good views down to Loch a Bhealaich and towards Glen Affric. After a cup of tea I set off for Meall an Fhuarain Mhoir, an easy walk across the plateau, with the dramatic cliffs of the Five Sisters across to the left. After that the terrain changes dramatically with a narrow, rocky ridge leading to another top, marked 891 on the OS map. 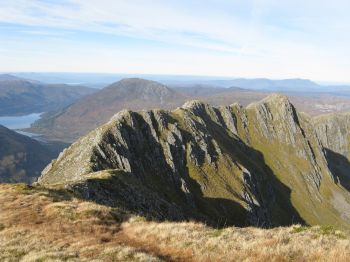 After a short descent you come to the "awkward bit". It is actually quite a difficult little scramble up some turf and slabs. I felt obliged to remove my camera from around my neck, take my gloves off and put my trekking poles away anyway. But it was a challenge and good fun as well and was quite short. Then there are a succession of rocky knolls which lead to the summit of Beinn Bhuidhe. 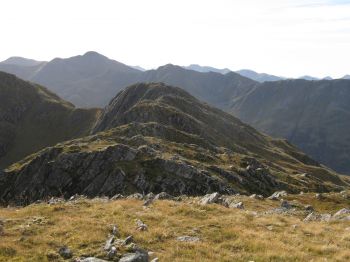 The descent to the path in the glen was a bit of a trial - an eternity of bog, heather and bog myrtle. But eventually I made it to the track which led back to bridge across the Abhainn Chonaig and my car. The walk took me about seven hours.

More great autumn shots there - glad to see you are back in Scotland!!

Like the deer - I was on Sgurr a'Bhac Chaolais next door last week and the sound of the rut in Coire Toteil was pretty deafening.

ps. There is a bridge over that burn near the start, just a hundred metres or so upstream

Thanks for the info about the bridge - it isn't shown on the OS. But a cold paddle does wake you up in the morning.
It's great to be back in Scotland after two months in the desert: somewhere cool, wet and damp!