Haystacks on a Glorious Day and a Poor Lost Dog!

Haystacks on a Glorious Day and a Poor Lost Dog!

Wainwrights included on this walk: Haystacks


This July I finally got back to the Lakes (after all the Scotland Munroing up till the end of June)accompanied by Richard. We had a bout of quite good weather and some really perfect days – this was one of them!

It was still and hot and, surprisingly for a hot summer day, clear as a bell. This meant only one choice for a walk really. It was too hot to do anything strenuous and it was superb photography weather so, as we were staying near the head of Borrowdale, that meant a short trip over the Honister Pass to Buttermere to do the superb and very scenic Haystacks. I was particularly keen to photograph its many tarns as I knew they would be mirror calm.

We got the bus over the pass (no point in driving over and paying to park when there’s a perfectly good bus service) and alighted at Gatesgarth Farm. Surprisingly I managed to avoid going straight to the ice cream van which lives there on nice days, much to Richard’s surprise no doubt...

As we are always late starters, it was about 1030 before we hit the path across the fields to the Scarth Gap Pass path and it was getting pretty hot. Of course as we ascended there were many other parties on the track which meant I had to have my customary competition (Richard hates those)... if there was a party in front, they had to be passed... if there was one behind, there was no way I was letting them past! I did have time as we ascended to notice that the views of Buttermere were fantastic behind us. Unfortunately we had a couple of pretty fit guys behind us so the pressure was really on... and the heat was building up as there was no breeze at all. By the time we were just short of the summit of the pass, I started to feel really, really sick with the heat and the exertion. I could see I was going to have to concede defeat but really didn’t want it to look like it so we steamed on until we reached the rocky area overlooking the valley and strategically went to admire the view… phew! 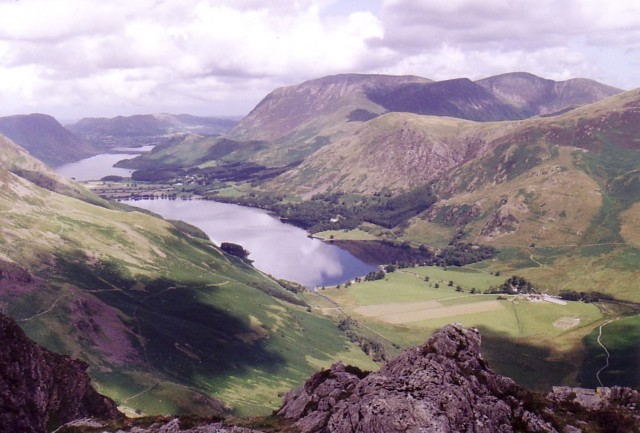 The view from the Resting Place;-)

When we’d drunk some water and had a cool-down, we continued to the foot of Haystacks – from there a scrambly, rocky route but easy and great fun. Just to complicate it a little we decided we weren’t allowed to use hands at all on the scrambly bits. We wobbled and balanced our way up – much to the confusion of other walkers who no doubt wondered why we didn’t have the gumption to get hold of the readily available bits of rock. We continued in this manner until we reached the final little crag when we decided to look for the hardest part of the crag we could find each and climb that (we’re only talking about 15 feet here). Richard chose a slightly harder bit than me but they were both too easy really…

Then we were on the summit and looking at the beautiful summit tarn – ‘a jewel of a tarn’ Wainwright called it – and he certainly got that right! 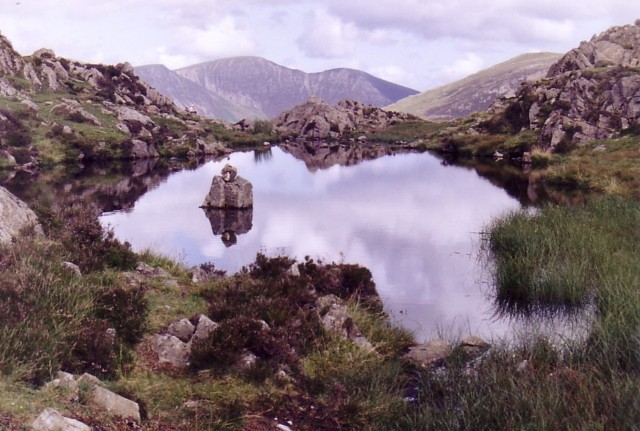 I have three favourite tarns on Haystacks, this one, Blackbeck, and one I discovered by (everyone else’s favourite) Innominate Tarn. I call this one Mirror Tarn and hopefully you’ll see why from the photographs but, to be honest, this particular day, they were all mirror tarns. 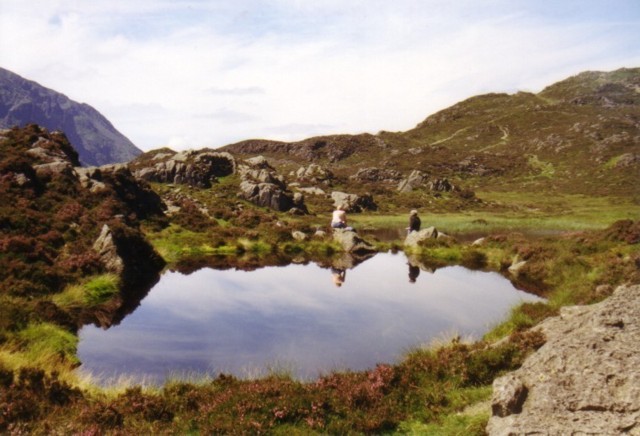 We meandered all round the tarn with my camera shutter clicking away madly and then decided to explore all the little peaks no-one goes to. Of course, that meant everyone followed us! We found a great peak on the front of the fell (over the big drop) which had some interesting gullies and a fascinating looking ledge around one of the ‘haystacks’. Don’t think I’d dare do it but it looked fascinating nonetheless… perhaps I’ll send Richard round it one day 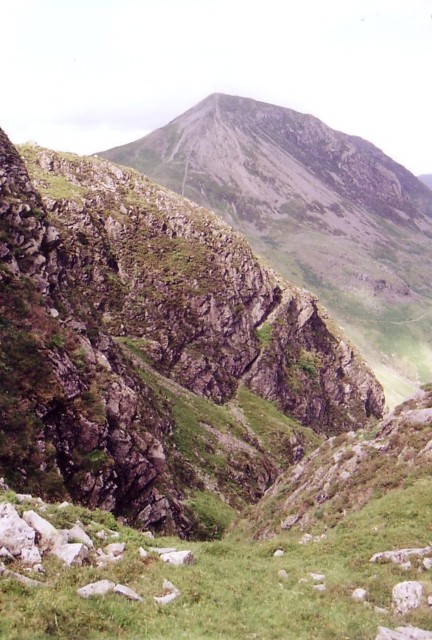 We then went for a long skive to Mirror Tarn and had a leisurely snack and a lounge in the sun. Soon it started to cloud over and cool off so we set off slowly down towards the route back to Honister Pass to walk back to Borrowdale. We soon reached Blackbeck and decided to scramble up onto ‘the tooth’ – a sharp rock which cuts into its shoreline. We were sat atop that and I was cleaning it of bilberries when we noticed a sheepdog slowly limping down the fell behind us. It stopped not far away and lay down. We waited to see the owner appear but no one did… we thought we’d best go investigate.

I approached the dog slowly so as not to scare it off and managed to get within a couple of feet of it. It looked quite thin and its coat was staring and dull. I told Richard to give me our malt loaf and fed it a slice one mouthful at a time. It took the food very nicely and gently and I eventually managed to get near enough to stroke it and then check for a collar and tag. I guess it must have been a farm dog as there was a collar but no tag. Either that or someone had abandoned it and didn’t want to be traced! We fed him some more malt loaf but didn’t have anything to attach to his collar to attempt to get him down off the mountain. Reluctantly we had no alternative but to leave…

All the way down the mountain I tried to ring various agencies like the police to see what we could or should do but of course, when you need a mobile signal, there never is one! When we reached the shops and buildings at the pass summit we asked if there was a phone we could use and they said there was one in the Youth Hostel porch. I tried my Chargecard PIN number but the phone would only accept cash. Richard lent me a pound coin and I dialled the local police number and put the coin in. I managed to say 5 words and then the money ran out!!

Completely impossible. So we had to walk nearly all the way back to Borrowdale before we could get hold of them on our phones.

The dog was reported via the police to one council, who passed it to another council… we did get a call back and they sounded like they were looking into it but we didn’t really think anyone would do anything about it. That meant that, 2 days later when we were up on Dale Head, I decided I really had better go back up Haystacks and look for it (with some handy baling twine off a farm gate). I asked everyone on the mountain if they’d seen a stray dog but no one had. I looked around for about an hour but there was no sign. I just hope it had got back to the valley and maybe belonged to Gatesgarth Farm and had got lost on a sheep round-up or something. Put rather a cloud over my trip…

. In my years of wandering the Lake District fells i’ve never done Haystacks, need to remedy that soon…

We went to the tarf bothy in early October and lost my friends dog in a corrie full of peat hags. When we returned in the morning to carry on looking we found it dead

My husband adores Buttermere and your pics are wonderful, thanks Sue

Hewin wrote:We went to the tarf bothy in early October and lost my friends dog in a corrie full of peat hags. When we returned in the morning to carry on looking we found it dead

That's truly awful - what had happened to it? Just froze to death?

. In my years of wandering the Lake District fells i’ve never done Haystacks, need to remedy that soon…

Canisp! Considering where you live you should be ashamed of yourself! Get yourself up there ASAP!

Hewin wrote:We went to the tarf bothy in early October and lost my friends dog in a corrie full of peat hags. When we returned in the morning to carry on looking we found it dead

That's truly awful - what had happened to it? Just froze to death?

I'm not sure, he mentioned it could of broke its neck falling in a hole but it may well of been down to exposure

Put a real $hitter on the trip, my mate and his wife have been heart broken - it was more like a child to them.

I'd have been heartbroken too!

I was over in Ennerdale recently and there was a lost collie reported there with signs to tell the hostel warden if you see it, if I remember correctly it was an elderly collie and was timid, they said not to try to get it down but report where you had seen it. It might have been found but it could be the same collie.

That's just the other side of the hill so it could well be - he was timid and could well have been elderly. I'll try to ring the hostel (if there's anyone still there at this time of year) - thanks for that. Of course, it was a while back now so my info may not be any help...

Just rang Ennerdale Youth Hostel - apparently that dog has been found (may or may not have been 'mine' then)...

I'm very glad to here that, being a collie owner myself, thanks for letting us know (we were there 10-17th October and the signs were still up then).