Scrambling heaven around Coire a' Ghreadaidh

Scrambling heaven around Coire a' Ghreadaidh

our_route.gpx Open full screen  NB: Walkhighlands is not responsible for the accuracy of gpx files in users posts
Big surprise! The British Summer seems to have crammed itself into a couple of weeks in May again.

But what a couple of weeks, sizzling temperatures, clear blue skies, and no midges to spoil the party - none of the biting variety anyway!

These were my final 3 Munros of the Cuillin ridge and potentially linking them, and tackling the ridge famed as the narrowest of its kind in Britain, had been in the back of my mind since I left Skye in March. Daylight hours means a (relatively) leisurely 5am start for the drive over from Aberdeen, a cracker with Glen Shiel looking superb.

27 degrees had been forecast in some parts of the west highlands, and setting off from the Glen Brittle youth hostel I reverted to an old tactic of the baseball cap for dunking in streams and chucking on the head

I headed for the north west ridge of Sgurr a’ Mhadaidh, a grade 2-3 scramble that, if successful, would cement my confidence for the remainder of the day and the Ghreadaidh arete shouldn't be a problem. I cut up to the ridge of Sgurr Thuilm, following grass where I could amongst the loose scree, with a few outcrops for some scrambling practice. The crest of this ridge leading to Mhadaidh was fantastic, narrow but easy in a kind of Mamores way, with the view of my route up Mhadaidh looking scary - I tried not to look until the last minute so as not to freak myself out! The ridge rises between two deep gullies, so is pretty easy to spot. A traverse across to the easier access point of the An Dorus scree gully was possible, but I backed myself and went for the ridge. The route is the buttress between the two gullies The scrambling was steep and exposed but I had good experience of blocking out all the 'if i fall it's going to hurt' stuff and focus on what was, actually, quite simple nuts and bolts scrambling. The holds were plentiful, surprisingly so at times, with one obvious crux where the crest thinned into a steep slabby edge. By this time I was well in the groove, confidence and adrenalin on the limiter, and I took it direct, and breezed up the rest of the ridge to the final delightful little arête to the summit cairn. Here I met 3 other climbers who were descending, and to be honest I was relieved to hear they were following the same route as me, further boosting my confidence of success with assistance to hand if required. A careful descent down scree covered ledges ended with a couple of steeper moves to the narrow window of An Dorus, the usual route of access and a welcome source of shade in the midday sun. It was useful to see the others tackling the initial steep scramble from the gap onto the Ghreadaidh ridge, but again the holds were more plentiful then expected and soon we were closing in on the top of Ghreadaidh, the remaining ascent being very straightforward. We were soon sizing up the famed narrow ridge to the south top, which is a more complex and intricate route than I'd imagined. A close up of Gillean's summit Progress at times required a leg either side of the crest, occasionally proceeding on all fours like a chimp, often using the razor edge crest as a handrail. Nothing was technically difficult if the exposure was ignored, which it was, proactively! At one point the crest was shaped like the saddle on a horse, and worn in a way to suggest many had previously gone across on their backside! I was amazed to hear a cuckoo that must have been somewhere near Loch Corusik, obviously there wasnt much between the two of us! The ridge that descended towards Banachdich got progressively easier, if more loose and scree covered, and I happily hovered behind the others snapping away at the jaw-dropping scenery. The scramble up and over Sgurr Thormaid was a classic case of progress being far easier ascending on the bare rock, rather than – perhaps technically easier – loose, scree covered shelves on the other side. The final ascent of Banachdich left the ridge crest and followed a scree path, and was certainly the lesser for it, but at this stage I just wanted to chill out at the summit and enjoy the fact I'd completed the ridge Munros Earlier haze had burned off, the jagged outlines of the Coire Lagan peaks had sharpened up, the colours were crisper, and now a snow-patched Ben Nevis was just visible in the distance. The Islands of Uist to Barra, mountains of Mull and Kintail, were all visible. Completing a technically challenging day – by my standards - and most importantly enjoying it (unlike the in pin ascent for instance!) was a sweet feeling. If anything there was a tinge of disappointment my time on the Cuillin ridge was at an end just as I was feeling at home in this scramblers heaven - something I never thought possible! The descent was straightforward, down a scree path into grassy Coire an Eich, and seemed strangely out of place for the Cuillin

Back at the car I couldn’t resist going for a swim in one of the many inviting rock pools, glimmering a tropical turquoise in the evening sunshine. 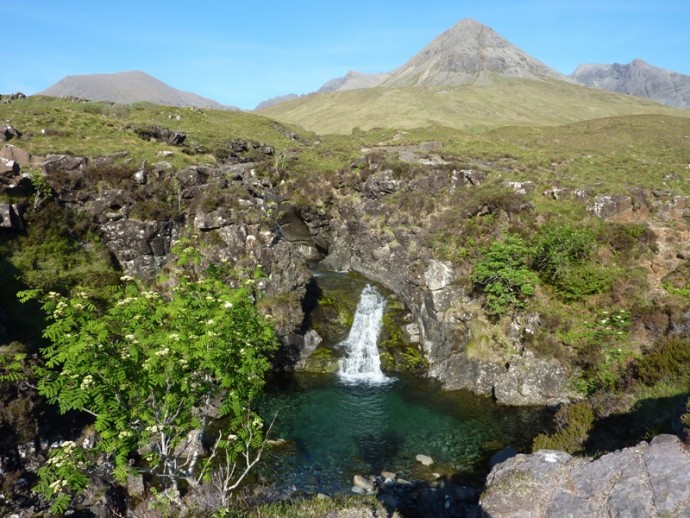 After such a perfect day I’d decided to leave plans for an ascent Sgurr a’Mhaoraich for another day, and enjoyed the long drive home with memories that'll live with me for a long time

Climbing a Munro is always special, but pushing the boundaries of your capabilities in the process is what sets the real epics to one side Great report and stunning pics. I would also like to thank you for this as we did the traverse over the next few days that followed (the Summer of 2012) and this section was a bit of a blur - made worse by my lack of picture taking. Cheers.

Stunning Ranger. Looks absolutly fantastic. Would love to give some of those routes a try some day , but because we normally have both our dogs it will probably be best if they were not with us.
Saying that, we did manage to get them over the Aonach Eagach ridge last week.
What do you think?

Fantastic. I did two of those last year in appalling weather and almost got lost. It's nice to see what I was walking over

Must go back in better weather, it looks like great fun in the sun

davetherave wrote:Stunning Ranger. Looks absolutly fantastic. Would love to give some of those routes a try some day , but because we normally have both our dogs it will probably be best if they were not with us.
Saying that, we did manage to get them over the Aonach Eagach ridge last week.
What do you think?

Wow - dogs over the Aonach Eagach

If only I had four legs I'd probably find it easier!

davetherave wrote:Stunning Ranger. Looks absolutly fantastic. Would love to give some of those routes a try some day , but because we normally have both our dogs it will probably be best if they were not with us.
Saying that, we did manage to get them over the Aonach Eagach ridge last week.
What do you think?

The odd step or two might need a helping hand

Real food for thought Ranger, thanks for that

Getting the weather for it makes so much difference, and you just have to hope and pray that it arrives for you. Would not want to do this route on a bad day! Interesting variation on the approach not using An Dorus