When i first started Munro bagging i was asked the question on numerous occasions, "do you think you'll do them all"? My answer was " i'd like to but there are The Cuillins, The Aonach Eagach and the remote Munros of Knoydart and Fisherfield requiring long days on the hills so ask me once i've did them". Recently i did the Knoydart Munros and then The Aonach Eagach Ridge and now the Fisherfield six which for me is a big step towards compleation although i've still to do all the Skye Munros. This walk started from the layby A832 where we started the walk into Shenavall Bothy. Joining me was the usual suspects Jimmy and Mo and this was to be their first time in a bothy. I had mentioned to them to travel light but this obviously fell on deaf ears as Jimmy took this huge bergan out of his car, it must have weighed about 30 kilos, probably more. Mo suprisingly was also carrying quite a heavy rucksack for her standard, which weighed about 2 kilos. We took a photo of all the kit before we set off and i know most of you will find it unbelievable, baring in mind we were only staying 2 nights in the bothy. I found it quite amusing as we walked in and couldn't help myself laughing for most of the walk in. Upon arrival at the bothy we were met by some fellow walkers who couldn't believe what they were seeing and what Jimmy had carried in, how he managed was beyond me. Once we arrived i helped Jimmy off with the rucksack and got ourselves settled in the bothy. We spoke about how we were going to tackle the big 6, possibly doing 2 on the day we arrived then the other 4 the next day but after the walk in we opted to have a drink and do all 6 the next day. We were now about to see why the rucksack was so big as the cans of lager came out along with numerous miniatures and mixers, most were shocked but i thought they might have had more than they did. The afternoon and evening was spent relaxing and playing cards with a couple of guys from Kendal before we called it a night as were going to have an early start. We set off at 06.15 the next day heading for Beinn a' Chlaiheimh and opted to make our way through the crags at Creag Ghlas to gain the ridge to the summit. From here it was down the ridge then up the boulder field to Munro no.2 and then the short but steep climb to no.3. From no.3 we followed the ridge round to no.4 and it was here we had lunch and chatted to a gent who was doing 3 from the south. After lunch we made our way down the fine looking ridge, taking a bypass path and crossing Pollan na Muice before climbing to argueably the remotest Munro of them all, A' Mhaighdean, this part of the walk feeling like it took for ever as our weary legs were starting to feel it. We had a wee break before we headed over to Ruadh Stac Mor with this involving going up a steep scree path with a bit of scrambling. Looking at Ruadh Stac Mor, it looked like there was no way up it but although steep with scree it was a fairly short climb. We returned to the bothy via the 2 Lochans and the stalkers path. The river crossings were no problem and the bog factor was virtually nil. The walk took 11hrs 30mins and was our hardest and longest walk to date as well as being one of our best ones. It's a beautiful area and we were lucky we made this trip at the right time, it was superb. View back to bothy 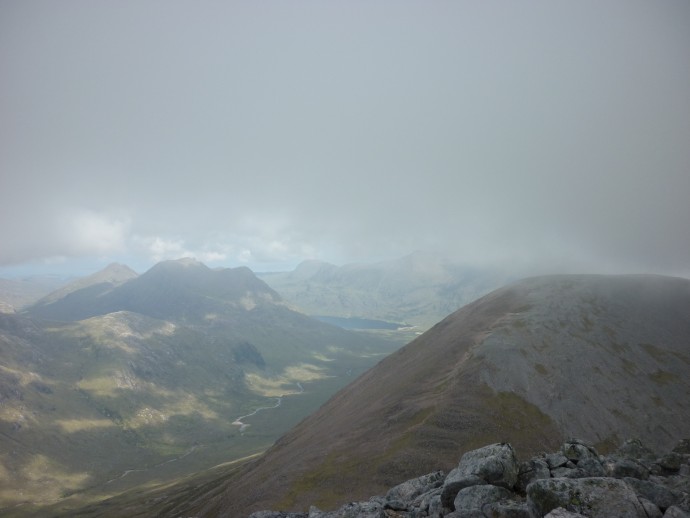 2 Corbetts, An Teallach & the first one We did it, honest we're not the blue team from Bargain Hunt View on way down Yes Mo your bum does look big in those shorts Jimmy on walk out

gammy leg walker wrote:Wow,JC,looks brilliant,cannie wait now till my turn,2nd week in Aug for me.

Cheers, i noticed some of you guys are heading here in August. I hope it's a dry summer, you'll love it.

Dammit JC, I thought I carried some stuff around the hills, that first shot of the packs is unreal...looks a fantastic hike though, some spectacular views and with that bit of cloud drifting in and out it really adds something to the pics. You do know that now you really are going to have to do them all

Great report Johnny. Guys like Jimmy are a great asset on bothy trips

What a guy. Lucky you getting a dry Strath Na Sealga valley. It was a bog when I walked it

Looks like your well on the way to compleating

Enjoyed that Johnny - well done all

and I thought my overnight rucksack was heavy, but 30kg takes the biscuit ! - cheers

Too right it was, it was all gone bar 3 cans by the first day. Jimmy dropped one at the layby and it burst and Mo was onto it like a shot. I thought she was going to hold it over her mouth and let it drip in but she put it in a plastic bottle and put it back in the rucksack.

Chris, Monty & Rockhopper, thanks for the replies guys. I guess it's just The Cuillins that stand in my way of compleation now

Well done guys. A good time on the walk too.. i believe i was a bit longer than that and had a river crossing in the dark.

Think you 3 would look better in green rather than the blue bargain hunters!

Nice one Johnny , looks a great trip . If I get around to doing these I think I will hire a wee pack horse for gear

Nice report, the weird thing is I was just looking, tonight, at how best to do this route!

Great stuff Johnny.Good to see lots of reports on this route lately.Must get up there soon