My first visit to the Ullapool area, apart from a brief drive up there on a rainy day last year was a thoroughly rewarding one.
I parked up at 9:15am in the small car park. Come early to avoid disappointment, it was full before I started walking. (Rant: By the end of the day cars were parked along the verge and in the passing places for several hundred yards either side of the car park. Vehicles coming along the road were having great difficulty passing even these cars, let alone each other, on the narrow single track road. If you own a Vauxhall Frontera and you now have a cracked wing mirror, well you shouldn't have blocked the passing place. Mine was already broken, so nurrr.

Stac Pollaidh's ridge is a collection of sandstone towers and pinnacles. Although I know there are bypass paths, my intention was to try to scramble across the towers, keeping as close to the centreline of the ridge as possible. I'm a purist

Right from the start of the walk you can see where you're going. Stac Pollaidh from the car park

A very nice stone and boulder path winds its way up the hillside and around behind the east tower, the cliffs looming over you as you go round. Walkers on the path up

The path climbs up to the col from the north side of the ridge. I believe this is to help prevent erosion on the south side. As you climb you get some fabulous views to the north, of Suilven Suilven from the climb up

and of Cul Mor Cul Mor from the path up

From the col it's a quick trot off to the left to make the top of the east tower, where it's time for the obligatory vertigo shot and a look west at the fun to come From the east tower, looking west

Waling over to the large cairn at the col, the first pinnacle is quite obviously not climbable. However, just round to the left and behind it is a wide gully you can scramble up, then get on top of that pinnacle from behind, from where you can lord it over those below you 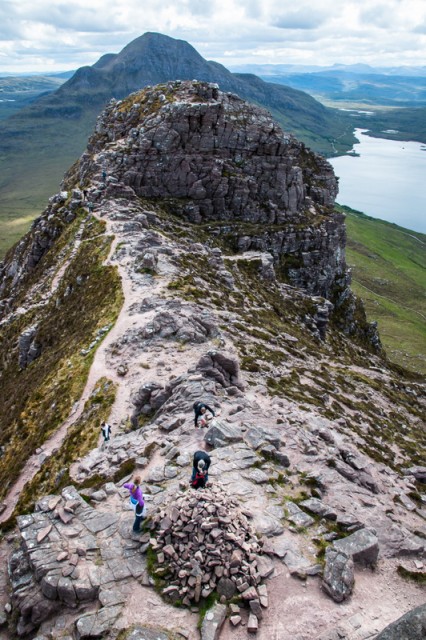 This seat is only big enough for one!

The other side of this gully consists of a large wall, which is the first real obstacle on the ridge traverse. There's a bypass path but I wasn't having that. 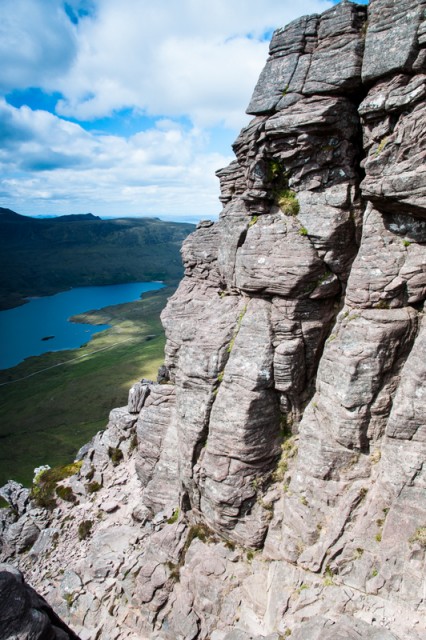 The wall of fear

I studied it pensively for some time. I wasn't prepared to admit defeat at the first hurdle. Eventually I spied what looked like a scrambleable, if tenuous, line and set out. This was my first scramble on sandstone and I quickly learned 2 things. Firstly, the upside is that sandstone is rough and provides plenty of friction for the hands and feet. Secondly the downside is that this ancient rock, in comparison with, say, the younger igneous rocks of Lochaber or The Cuillin, is heavily weathered. The edges are rounded and holds are thin. About a third of the way up I found myself faced with a scarily exposed and utterly committing move when I was still not sure if the rest of the route was climbable. Prudence prevailed and I retreated. At the top of the gully though, a quick swing round a corner got me to a nice chimney which led to the top of the wall.
Looking back the views to the east including Cul Beag were remarkable The rest of the scrambling was great fun. Up, down, up down. At one point I found myself, legs braced nearly horizontal, trying to reach over to a hold with my right hand, my left hand waving in the air for balance. That sure got the adrenaline going! It's a good job sandstone's so grippy. I didn't look down. The top of one of the pinnacles had a covering of grass and lovely bum-shaped seat, so I stopped and had some lunch 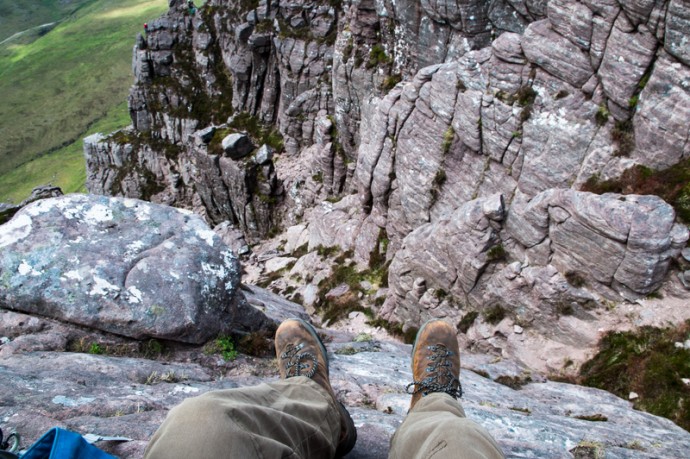 Just before you reach what we'll call the "tourist summit", you pass some amazing sandstone pillars And then before you know it, you've reached a cairn. This is the aforementioned "tourist summit". The way to the true summit on the western end of the ridge is blocked by a large pillar, with no possible traverse paths. If the guidebooks are to be believed this is a thing of dread, the stuff of nightmares. It didn't look too bad to me though, and a lady I spoke to said they'd got their dog up it so I went for it. There are two possible routes. The direct route (red) goes up some easy steps with thin handholds right over the crest. One of the blocks has been polished smooth and is very slippery, so for prudence's sake I took the easier (blue) route on the way back. The blue route is more exposed and therefore scarier but I reckon it's the best way back. Your reward for going to the true summit is a fabulous view out over the sea towards the summer isles, a view which is obscured by this summit when you're on the tourist summit I can see for miles and miles

and of course, a view back of the people on the tourist summit plucking up their courage to come and join you View east from the summit

To get down without retracing too many of my steps, I returned to the tourist summit and then took the steep gully to the north. This is a steep, slippery, but thankfully short and not difficult route down which joins up with the excellent path that circumnavigates Stac Pollaidh, and eventually rejoins the path up.
All in all, very fun day. It's the shortest and lowest walk I've done in Scotland, but definitely one of the most enjoyable.

Great report there, Stac Pollaidh is a great mountain and so much fun with tremendous views. We went by the red route on your photo after taking some time to decide on just how sensible it was

(Might just need to go back sometime and try out the blue; certainly merits respect!)

I've still to do this and am looking forward to it - although may not have the nerve and ability to do everything you did!

Loved this report, of a great little hill

Possibly my favourite little hill. Looks good and is good fun when you're there too. Some excellent photos you got, and great views. It was a bit chiily and overcast when I was there, but I really must return one day - prefeably when the sun is shining

Awesome...need to get up there someday soon.

Bod wrote:We went by the red route on your photo after taking some time to decide on just how sensible it was

(Might just need to go back sometime and try out the blue; certainly merits respect!)

The SMC Highland Scrambles North guide also reckons that up red and down blue is the easiest combo!

Cheers guys. I thoroughly reccomend this. I took 4 hours, but I did spend a lot of time at the top of every pinnacle getting the camera out of the rucksack and taking photos. It could easily be done in 3 or less. Compared to something serious like the Aonach Eagach I felt this was a bit of a playground - loads of little pinnacles to scramble up and down, and choice of route is yours.

Fantastic. Liked the Boots and all pic - great idea - fortunately I was sitting down whilst reading your report! Also thanks for the red and blue route: Cheers for that.

jimandandrea wrote:Fantastic. Liked the Boots and all pic - great idea - fortunately I was sitting down whilst reading your report!

If anyone's ever tempted to take a similar pic, if you have a zoom lens whatever you do don't adjust the zoom while you're looking through the camera. I did and it felt like I was falling off, I was dizzy for a few seconds and it scared the willies out of me