Braeriach, Angel's, Cairn Toul and Devil's from Linn of Dee

Braeriach, Angel's, Cairn Toul and Devil's from Linn of Dee


We set off this weekend to do a serious training walk for the 13in24 challenge. We didn't anticipate it turning into a 12 hour beast until we started.

Rich had set the route, but he had ended up going offshore so Clubby took the the lead, with Al, Neil O' and myself bringing up the rear. We hadn't realised that rich had discussed with Clubby about doing Cairn Toul, Sgor an Lochain Uaine and Devil's point with Braeriach added on for good measure if we fancied it. This was during the hot spell in March and it was like the Costa del Cairngorms in the Lairig Ghru, it was roasting. So no thermals this week.

We started at 8am in Linn of Dee so it was an early pick up in Aberdeen in Clubby's cracking wagon! It took a standard hour to get to Derry Lodge and we marched straight past it, over the boggy section beyond it and then back onto the path through the thin bit of forest then into the thicker bit at Luibeg Bridge. We took the shortcut though and didn't bother making a detour to the bridge. Clubby reliably informed us that he had never had to use the bridge and it would save us a bit of time and energy.

So after carefully picking our rocks to get over the Luibeg burn we ploughed on to the Lairig Ghru. We walked straight past corrour bothy, carefully looking at what was to be our decent route later on down through Coire Odhar. We kept on the path looking for a fork that would take us up to Garbh Coire Bothy and our ascent to Braeriach but it never came. We left the path and followed the burn up to the bothy. Perhaps not the comfiest of places to stay but I imagine it would be a useful shelter in bad weather. We didn't have that issue today. We stopped at the bothy, filled up our water bottles and had a sunbathe for 10 mins or so. It was now time for the real work to begin. We carefully picked our way up the slop keeping to the right of a patch of snow which came in handy as a cooling aid, it was roasting! 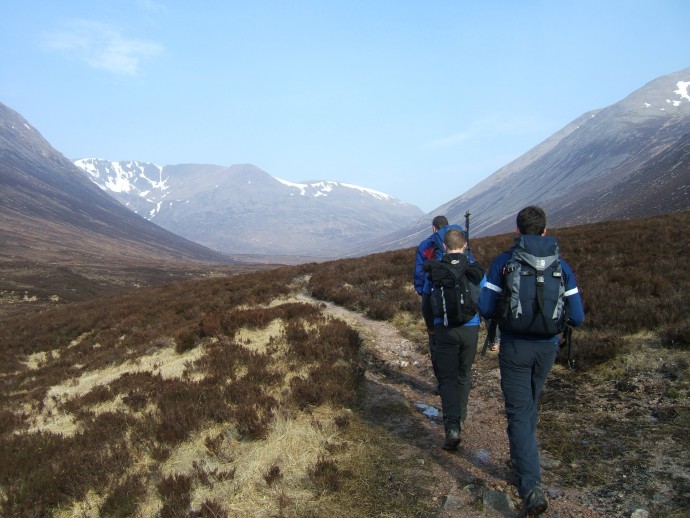 We reached the summit of Braeriach at about 12.30 - 1pm, 4.5 - 5 hours in. Not even half way. We had a good break here fuelling up for the 3 peaks that remained. We sat and chatted to a few guys who had come up from the aviemore side and were heading on to Carn Toul etc. They had a train to catch at 7.30pm from Aviemore and Clubby explained to them how long it took us to get from the other end of the valley. They were going to attempt to get Devil's point. (The last time we saw them was on Carn Toul, did you make the train guys?)
We also heard from someone else that they passed someone with ski gear on their way up, guessing they wouldn't have had much luck! 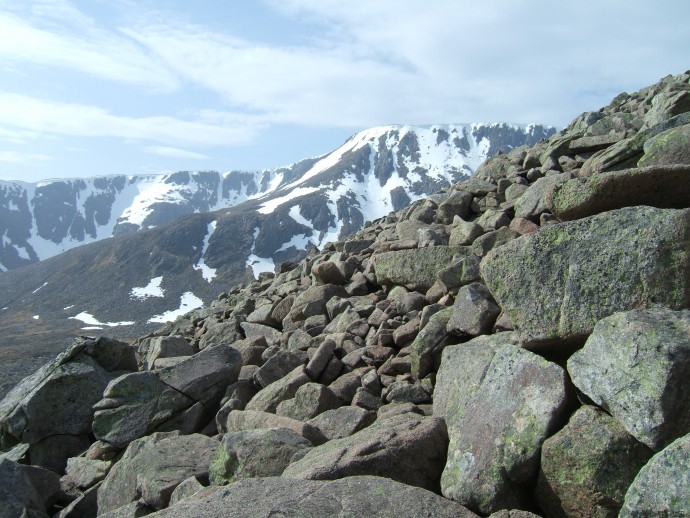 The stoney southern slopes of Braeriach 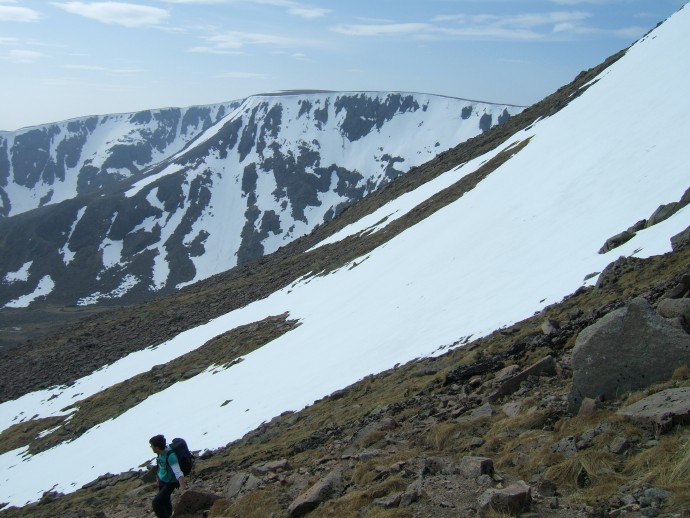 Patch of snow guiding us up, Al taking a well deserved break 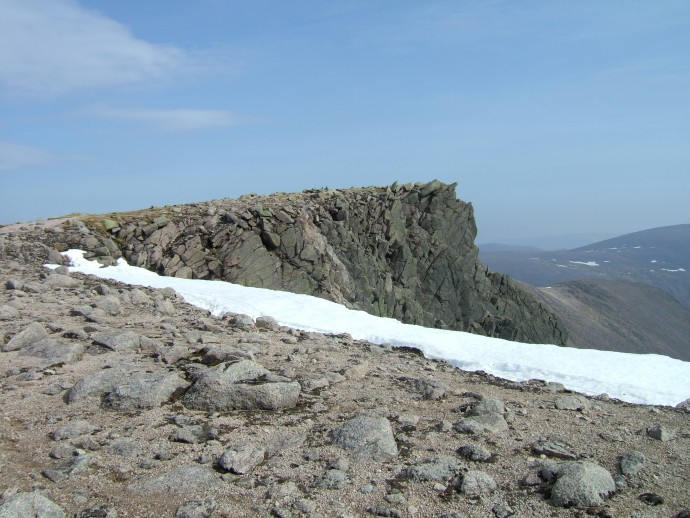 The last remaining snow clings on

We then set off for Angels peak. It looks so close but as you quickly find out its a little bit of a detour to get to it, walking right round the edge of the corrie wall. The walk was pleasant though, over the wells of Dee and round and up the stoney slopes. Once we made the summit it was a case of a quick bite to eat and then we fired onto the next peak, the magnificent Carn Toul. There was a little bit of a scramble to get up this peak but we managed in the end and the reward at the top was worth it. 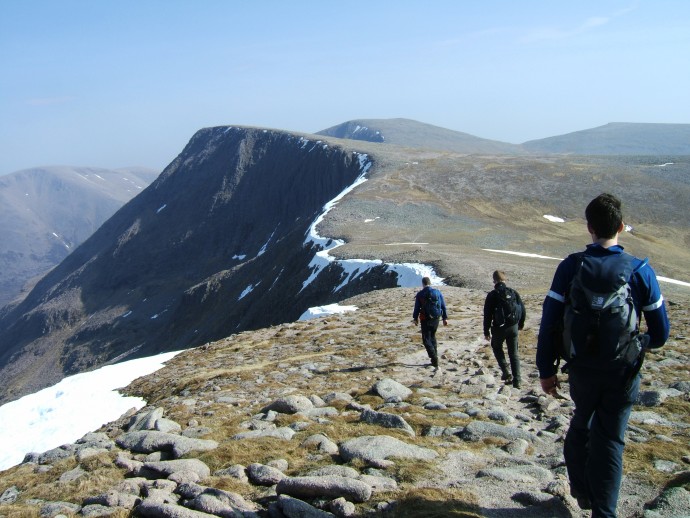 following the ridge round

We decended the southern slopes of Carn toul towards devils peak and this was where we found the most snow of the day. Fairly surprising considering the slope was predominately facing the south. We had a good slide down here and left our bags at the col before climbing up to devils point. It was at this point that two guys ran past us up up and away. They passed us 5 minutes later coming back down again. Very impressive, but not for me! We reached the summit around 4.30pm. It was at this point we started to think about the trip back. It was to take us 3 and a half hours. We decended down to Corour bothy where there was a fairly hairy moment for Al when a bit of snow broke off and he went with it. Luckily Neil O' was on hand to save the day and rescued him! He would've ended up at the bottom of the slope had Neil not stepped in. What a guy!

We made it back to the van at 8pm to complete a bang on 12 hour walk. It was just starting to get dark. A long, but very rewarding day. Heck this was only half the time of our challenge so we'd better get used to it.

our_route (3).gpx Open full screen  NB: Walkhighlands is not responsible for the accuracy of gpx files in users posts