A walk to start breaking some new boots in. Easy going and the chance to cut the route short if they start to feel bad!An hours drive took Dan and I past the Spittal of Glen Shee to the Dalmunzie Hotel and we were away walking by 9. I'm glad the forecast had told us that the winds of the previous day had died down - it didn't feel like it

We passed Glenlochsie farm and started to find traces of the old railway line from the hotel to the Lodge. I'd always been intrigued to see this performing a couple of ridiculously tight hairpin bends on the map but hadn't got round to investigating until a few months ago. A clever trick. Drive beyond some points on the low track. Change them and reverse up a short incline beyond another set of points on the higher track. Change them and off you go. Some of the old track was still there

Today we left the valley before even reaching that spot and started up Creag a' Chaise. The heather was very deep in places and made for some hard going but, eventually, we got to this first top and the views over Gleann Taitneach began to open out. The finest feature was Carn Bhinnein - a welcome touch of shape in these often featureless hills. 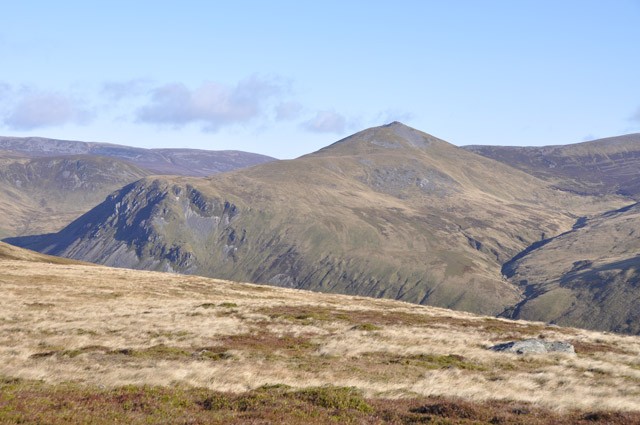 The going improved and a stroll over the 717m bump brought us to the place where the ridge sort of merged with the top of Choire Bhric - or maybe it's Coire Bhreac. The OS has the Allt a Choire Bhric flowing through it but Creag Bhreac above it. Similar confusion seems to occur over Gleann Taitneach\Allt Ghlinn Thaitneich

Anyway, whatever its name, it's fairly typical of these hills lacking much by way of distinguishing features. The deer seemed to like it though and we did find a welcome little suntrap out of the bitter wind. 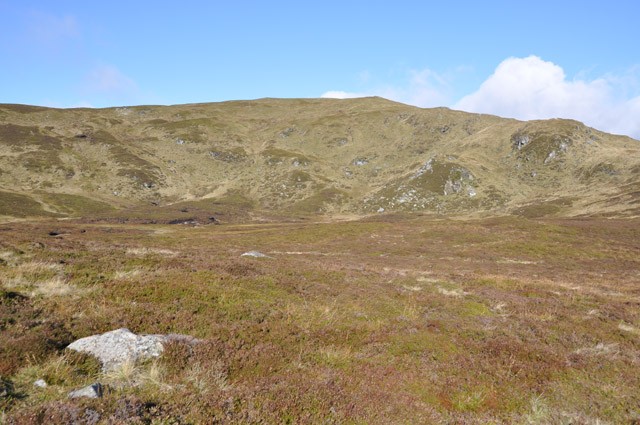 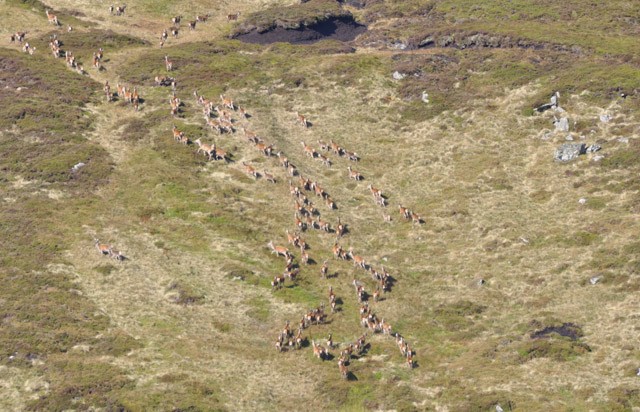 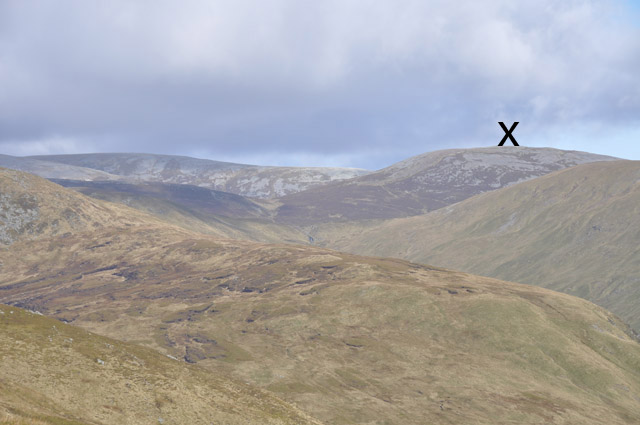 Okay, a challenge. X marks the spot, but which spot?

A short pull up onto the 827m lump and we could now see our first summit ahead - separated from us by a gently undulating ocean of heather. 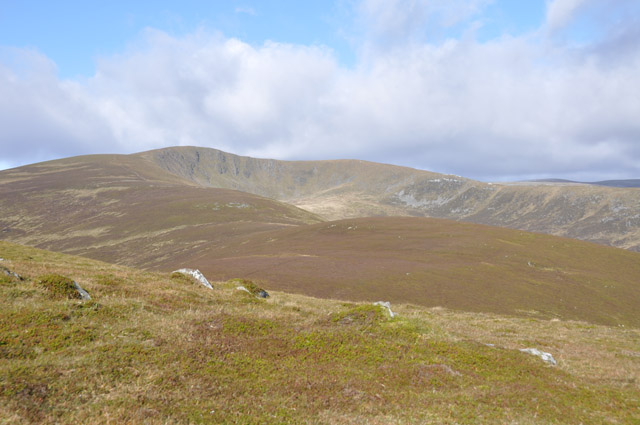 From the summit our next objective appeared - Carn an Righ. 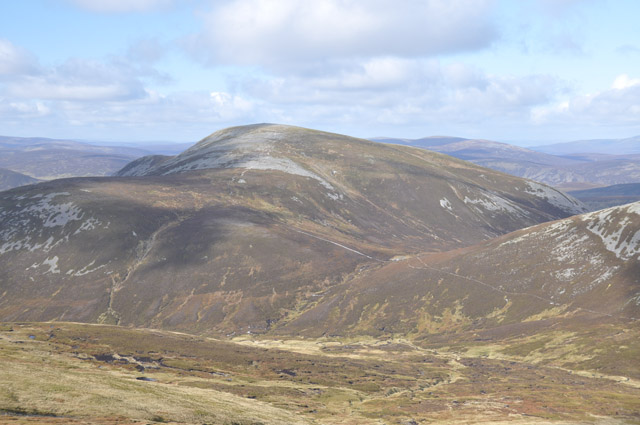 We 'cut the corner' of the Walkhighlands route heading North West from just before the 930m spot height, across the stream and up to the path leading to the col below Carn an Righ. From this col the view through to the Cairn Toul range was rather fine. 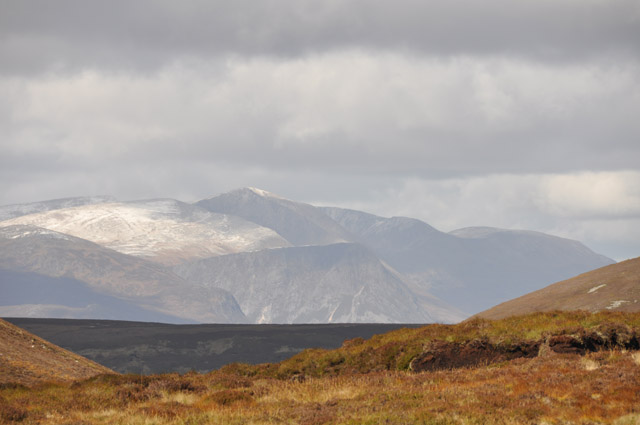 From the summit the view of Beinn Mheadhoin and Derry Cairngorm reminded me that just a week ago I'd been sunbathing over there. Definitely not an option today - we were just glad that the storm passing over the Lairig Ghru seemed to be heading East not South 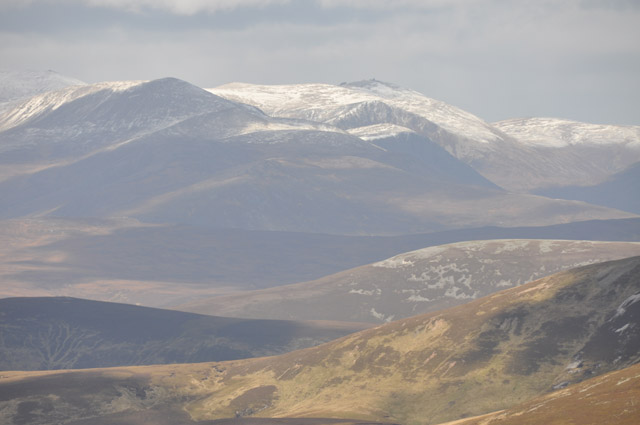 The first snows on Beinn Mheadhoin 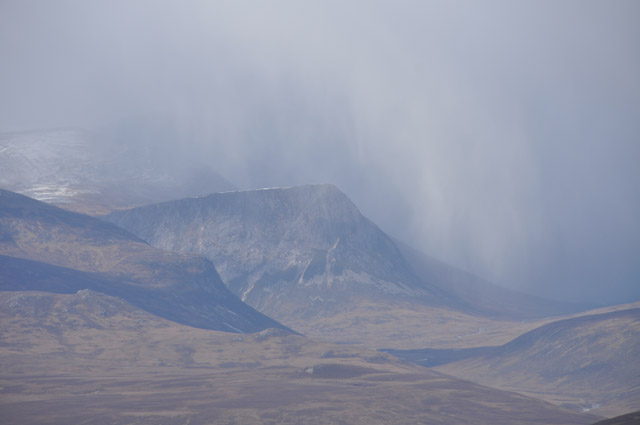 Storm over the Devils Point.

Back to the col and then away up a track (not marked on the map) rising gently and contouring round towards the dip between Mam nan Carn and Beinn Iutharn Mhor. It's just visible on the next photo but eventually disappeared leaving us to pick our own way round.

Up to the summit and a nice atmospheric view back over Carn an Righ and Beinn a' Ghlo.

By now it was 4 o'clock and this hill is a long way from anywhere. Looking North West made me appreciate what a remote bit of country we were on the edge of. No roads but big enough swallow the Lake District with room to spare. We chatted for a bit to a couple who'd come up from Glen Ey via Carn Bhac then they headed off east and we headed back to the col below Mam nan Carn. 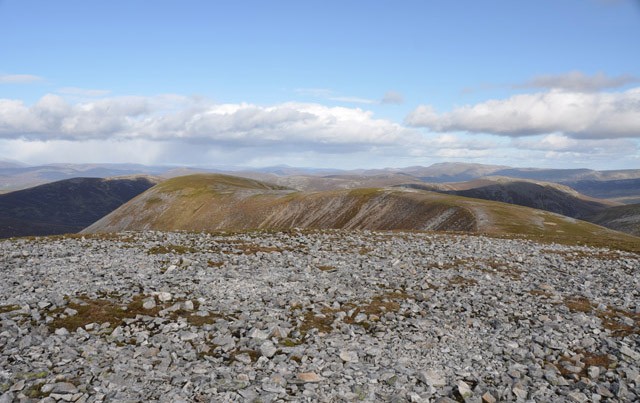 We were going to descend Gleann Taitneach but first we had to make our way round to Loch nan Eun. This had been a favourite haunt of the late Pipe Major Bert Barron whom I had been fortunate enough to become aquainted with through my work many years ago. A renowned and much respected piper and teacher he often visited the Loch, sometimes camping there for a night or two. It inspired him to write the slow air 'Lonely Loch nan Eun' whose haunting strains drifted though my mind as we passed.

X - is it Beinn Iutharn Bheag with big brother behind?

Got it in one!

Lovely pics N to the Lairig Ghru. Always amazes me how small Devils Point and Carn a Mhaim look

Yes - they really are just minor foothills. There's not much reascent to the Devil's Point either - maybe it will be demoted

Paul Webster wrote:Yes - they really are just minor foothills. There's not much reascent to the Devil's Point either - maybe it will be demoted