The morning of the 3rd day began with the same routine as the previous two mornings and the same as the subsequent mornings, as the days go by you become slicker at the routine, the more you do it, the better you become at it, knowing what to do, when to do it and what is the best way to do it. At the start I would be taking about an hour and a half to get ready to set off for the day, already I was noticing the improvement, that also goes for packing the rucksack, packing it in such a way that if I needed something during the day I knew where it was and could get to it without unpacking the whole bag.
After saying my goodbyes to Stevie and Shaun I was off, I chose to cross the open hillside of Coire Sgoireadail to connect with the track on the hillside rather than complete the dog-leg down the road to the start of the track at Loch Coire Dubh. It was slightly overcast but looked as if the sun was going to burn through later on, which it did. The way up the glen was easy, a gradual ascent on a good path/track to begin with, becoming intermittent the closer you got to Bealach Coire Sgoireadail, once at the foot of the Bealach it became rocky and rose up quite steeply, but it wasn’t too far to the top and was covered in no time at all. From the top of the Bealach you could see the grand vista of Wester Glen Quoich and the next Bealach on the route, Bealach Duibh Leac off to the left on the far side of the glen, Also visible was the track that came up the Glen, but it didn’t go any further than where the path that I was on met. "that’s not what it showed on the map", it shows a path all the way, That meant that the next section up and over the Bealach was going to be tough going as the glen floor looked boggy, haggy, tussocky and Bealach Duibh Leac looked steep sided.
Now it was my turn to attack a Bealach head on in a frontal assault, unlike the Bealach on the second day. I broke it down into digestible chunks and just chipped away at it for over an hour, zigging and zagging until I finally crested the ridge, to my amazement there was a dry stone wall on the ridge that followed it all the way round in a horse shoe for what seemed like miles, I remember thinking at the time “who in their right mind would build a wall up here at 700m and why”?, the effort that must have gone into building it is mind boggling. The view down into Glen Shiel with the A87 winding along its bottom next to the River Shiel is impressive, worth every step of the hard slog up the Bealach. 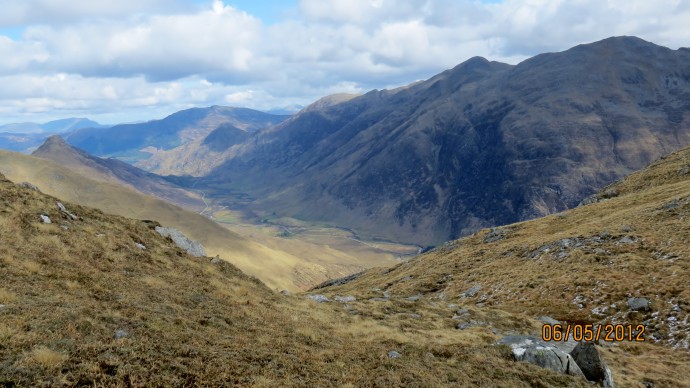 Whilst standing on the ridge admiring the view, which had a freezing cold wind blowing over it, I could see Stevie and Shaun tackling Wester Glen Quoich floor bellow me. 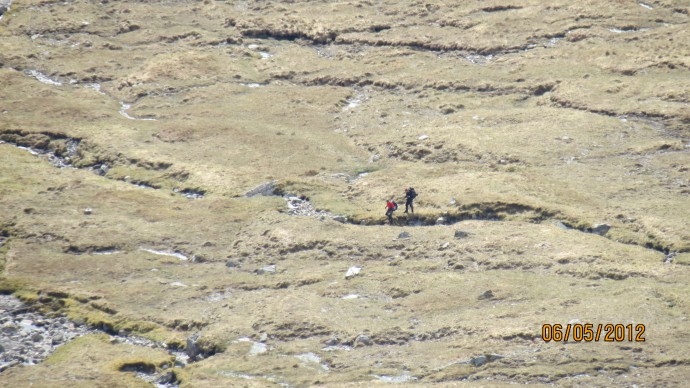 I received a text whilst standing there, the first phone signal since leaving Glen Finnan, so I took the opportunity to phone home to Moira. I started shivering whilst talking to Moira, after only a couple of minutes I had to cut her off and get moving again due to the cold. The descent into Glen Shiel started very steeply over rocky ground without a path, but at least it was a rapid, once out of the rocks it was a simple descent all the way on a good path to the A87 where I had a good rest sitting in the sun beside the road catching up with home. Now began the first of two boring plods of the walk on the horrid black stuff all the way to Morvich, the few miles were relatively quickly covered, So what can I say about this part of the day?, absolutely nothing!, I hate tar!, As dull as dishwater!. The only good thing was that I had changed my boots this year from my old faithful Scarpa Nepals to the Salomen Cosmic 4D's, which were fabulous on the black stuff but would later let me down. Once I reached the filling station at Shiel Bridge I stopped for refreshments and to have a stock up on snack bars, also having another look for the elusive fruit scones, still none to be had. Once again Stevie and Shaun arrived, their break and refreshments were going to be taken at the pub this time so I left them to it and carried on along the roadside past the Kintail hotel finally turning off the A87 onto a minor road heading to Morvich Caravan and camping site for the night and more importantly the use of their showers and laundry facilities, which by now I was desperately in need of, “a bit ripe”!.
The campsite has good facilities and it wasn’t long before I was feeling fresh and smelling of summer flowers in the meadow, the tent was up and organised and it was now time to get dinner on.
This year I decided to leave the sturdy Vango Tempest 150 behind and opt to take the GoLite Shangri-la 3 with the Oook nest half inner as the tent of choice instead, This decision was based on purely the amount of floor space and its weight, 1.2 kg compared to the Vango at 2.5kg, a decision I would later regret, the reasons will become apparent at a later stage of the report.
Stevie and Shaun arrived whilst I was having my evening meal, they had a glow about them, suitably refreshed at the pub. The evening was spent relaxing and discussing yet another days events and tomorrows route before turning in for the night. ZZZZzzzz!


stage 4.gpx Open full screen  NB: Walkhighlands is not responsible for the accuracy of gpx files in users posts

Yet again another glorious morning which started as the rest have started, Steivie and Shaun were up but Stevie was complaining of feeling unwell. After breakfast and packing up Stevie informed me that he was going to start later or have the day off depending on how he was feeling later on, Once again I said my goodbyes and off I went, Out of the campsite back onto the road from last night, this time turning right and then right again onto a farm track leading up Strath Croe, This is a nice easy forest walk, on a good forest road all the way until it terminates at a concrete bridge, at this point it becomes a narrow path, uphill into Bealach na Stroine, 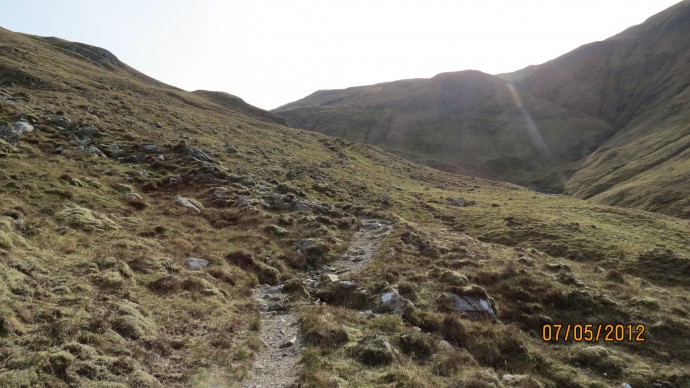 Once over the Bealach the ground is relatively flat for a short distance on a good path before the steep descent down to the Falls of Glomach, these falls are impressive, standing at the top looking down at the cliff sides I chickened out of taking the path down because it looked narrow, damp and very steep, I decided to change the route down and opted to go up river for a short distance and then to cross the side of Meall Sguman where I would connect with a path at the side of Loch Lon Mhurchaidh. This path is intermittent and is at times hard to follow over haggy peat bogs, From a junction in the path I turned left to take me down the steep sides of Coire Easach to Carnach. During the descent at one point the path stopped abruptly where there had been a land slide, only about 50 feet away the path resumed but in-between the steep ground was very loose and sandy, I decided to cross it, not a clever move as I just made it across, the ground was slipping away with every step. In the distance looking at Carnach I could see Shaun approaching the farm, So I knew he had not gone down the path at the falls either. From Carnach, after a short break, the walking was easy again on a good farm road up Strath Duilleach, past Iron Lodge and then keeping left at the next junction, now it was up hill for a short time with good views of Killilan Forest and the surrounding hills, this is where I caught up with Shaun or he waited for me, A nice easy walk all the way to Maol-Bhuidhe Bothy where it was time to take a long break. At the bothy, which is in good order, we planned the route which would take us over open ground with no path so that we could connect up with the track on the shores of Loch Calavie, we agreed that we would stay high on the shoulder of Beinn Dronaig where it would be drier underfoot and easier to spot the track and pick a route to it. Once on the track quick progress was made along the shores of loch Calavie in light drizzle, down and around the corner to Loch an Laoigh which leads to the open ground in front of Bearneas Bothy (NH021430), which is only a short distance but is peaty, haggy, tussocky and wet underfoot. On reaching the Bothy it was time for dinner, get the fire going and organising ourselves for the night. A nice warm night !