The start of a whole precious week off work, and I was hoping to get some walking done ... and lo and behold, believe it or not, the weather forecast was starting to look very encouraging

. Shurely shome mishtake... Anyway, I didn’t take twice asking and decided to have a look at the Tarmachan Ridge, which I’d been hoping to do for a while.
There is ample roadside parking at the sides of the beginning of the wee track that leaves the minor Lochan na Lairige road just a few hundred metres north of the NTS Visitor Centre car park. Fortunately I’d managed a reasonably early start. As I set off, the Meall nan Tarmachan summit was still in cloud, but there was some blue sky about and the forecast said that the cloud should clear as the day went on. I was hoping that Michael Fish (well, the mwis.org website actually) hadn’t got it wrong... 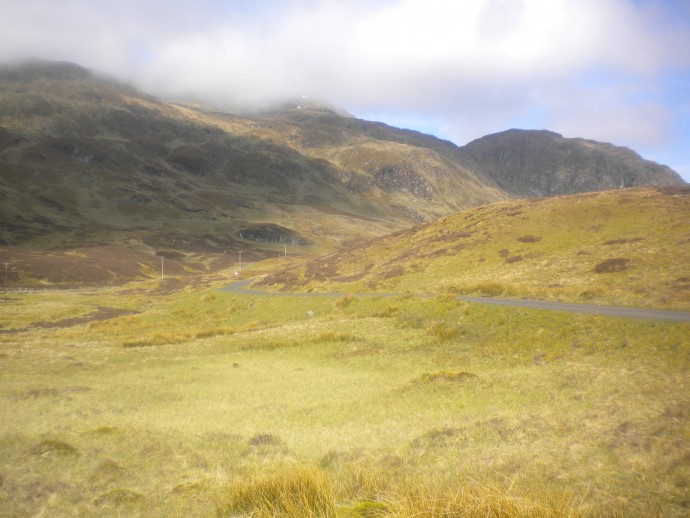 An excellent path (as usual for hills on NTS property) branches off the right hand side of the track at a wee bridge over a stream, just about half a kilometre from the parking area. It heads for the grassy SE top of Meall nan Tarmachan, the first of a grand total of four Munro Tops (plus the Munro of Meall nan Tarmachan itself of course). This hill really is a miniature mountain range in its own right.
Although the SE Top is just a grassy lump of a thing, and the walk up to it is pleasant enough without setting the heather on fire, the summit of this first top does turn out to be an excellent viewpoint. Meall Corranaich and Beinn Ghlas were looking quite impressive on the other side of the road: 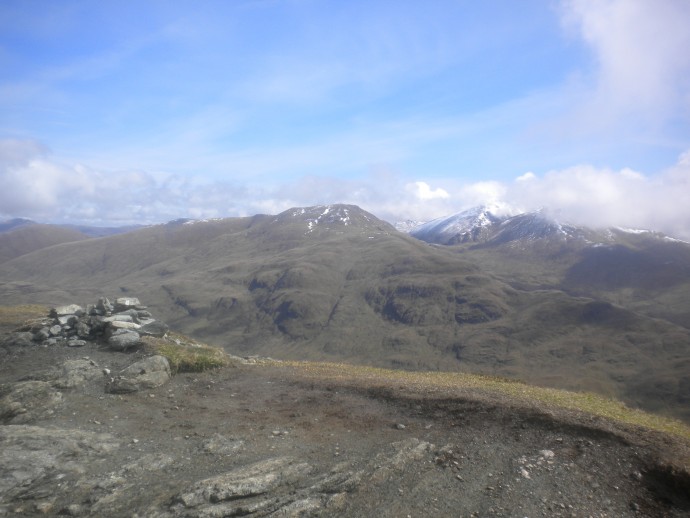 And Meall nan Tarmachan and (especially) Meall Garbh were looking impressively lumpy ahead: 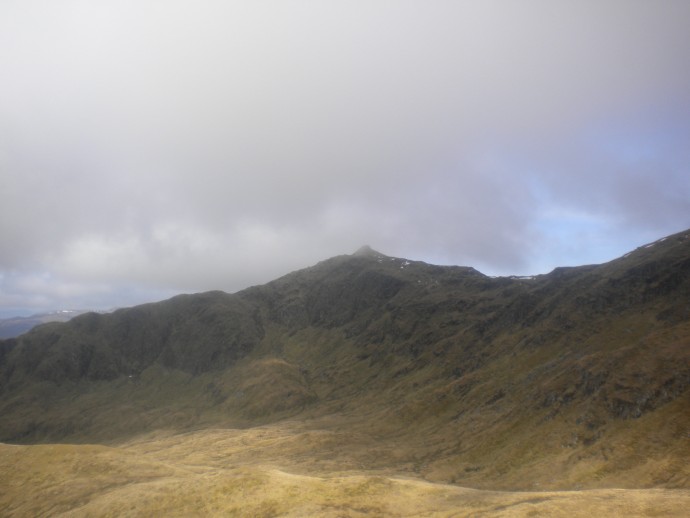 The next bit of path crosses a right boggy bit of ground at the bealach between the SE Top and the Munro – however, those good volunteers of the National Trust for Scotland

have laid some very nifty stepping stones which help enormously. 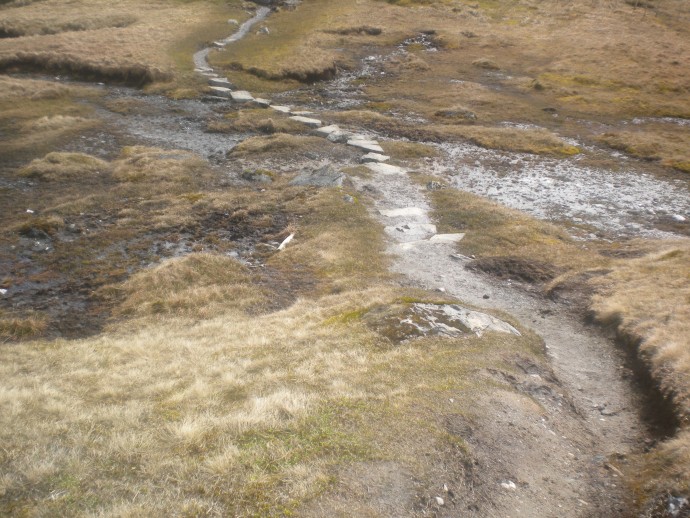 And so onwards to the Munro summit! This was Tick Number Thirty for me, and it was an appropriately fine hill for the occasion. Here are my rucksack and trekking poles at the summit (I’ve been warned off the dangers of vegetables as Proxy Objects in summit photos – see Meall Glas / Sgiath Chuill – and will dutifully stick to more conventional stuff in the future). As you can see, I have all the cool gear as usual: I snapped a pole on a walk over the North Glen Lyon group in early March, and grudged paying for two new ones despite Tiso’s one-for-twenty-quid, two-for-thirty-quid deal. So now I have a fine mismatched pair (the poles, that is 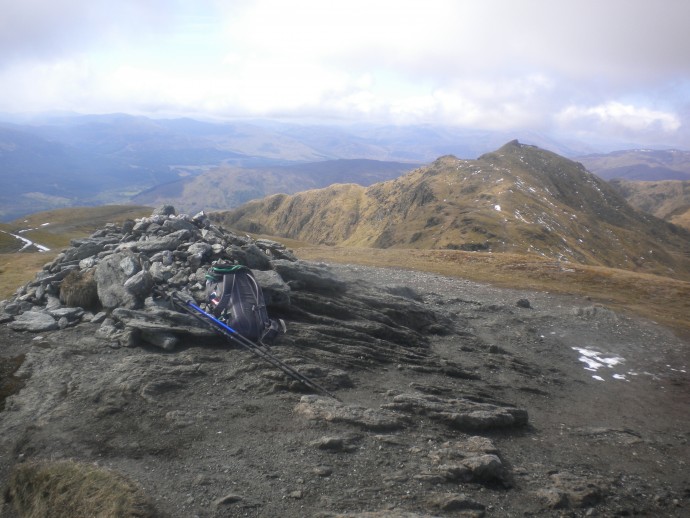 Meall nan Tarmachan means Ptarmigan Hump. Not to be confused with the Ptarmigan Hill that is the foothill of Ben Lomond, of course. Sadly, there were no ptarmigans about, although I did see a few grouse.
The next Munro top, Meall Garbh, is probably the best one: in fact, it outshines the Munro summit to be honest. It looks attractively pointy when viewed from Meall nan Tarmachan: 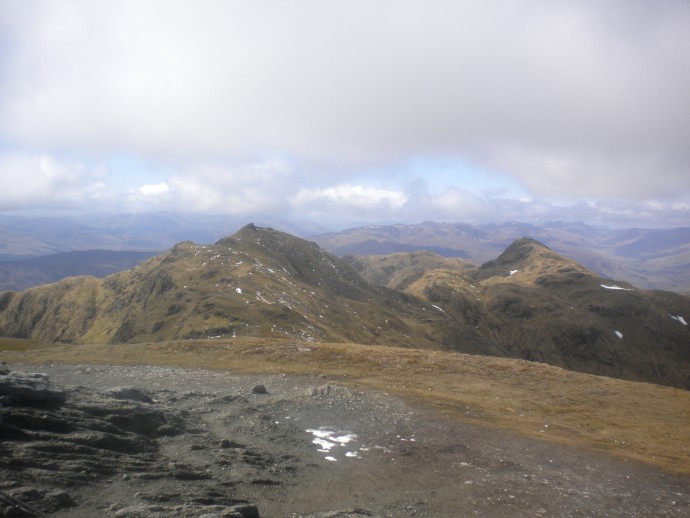 The intervening bit of path crosses some attractively complex terrain, with some bonny wee lochans and hillocks: 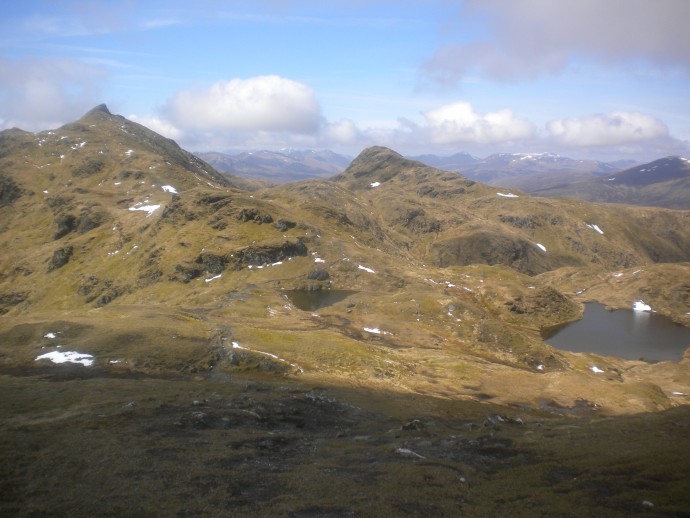 The summit of Meall Garbh (“Rough Hump”) doesn’t disappoint either – a rocky and deliciously pointy perch with excellent views. 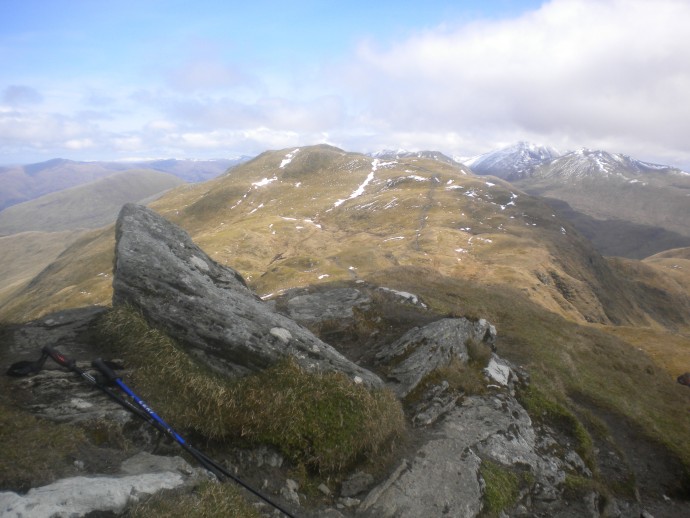 The next bit is great fun, too – a tiny, narrow ridge-walk that seems to disappear suddenly into the abyss: 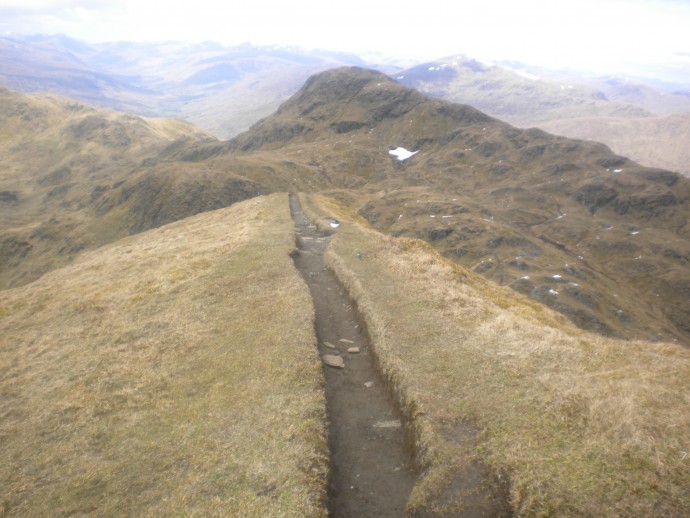 And it does too! Next came the famous Bad Step, which gave some excellent scrambling. I had been fairly nervous about it in advance, but in fact to my relief it turned out to be well within my (limited) scrambling capabilities – definitely easier than the NE face of An Stuc encountered on the round of the eastern Lawers group, for instance. It was definitely exhilarating rather than terrifying – although there were a couple of moments when I felt that maybe I’d been “exhilarated long enough” (as Queen Victoria almost certainly didn’t say). It did look impressive from below though! Did I really come down that For anyone who doesn’t fancy the Bad Step, there is actually a wee bypass path that goes off to the right of the main path just before things start to get interesting. The bypass path is clearly visible looking back from the next bealach: 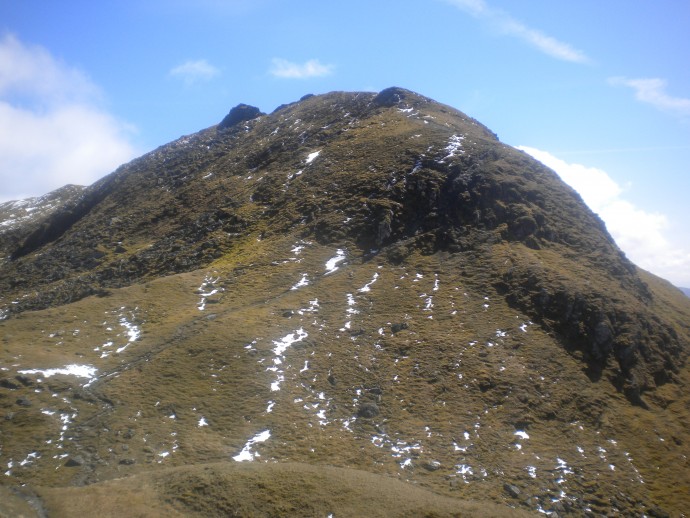 From Meall Garbh, the ridge takes a long and attractive curve round to the left, with excellent views. 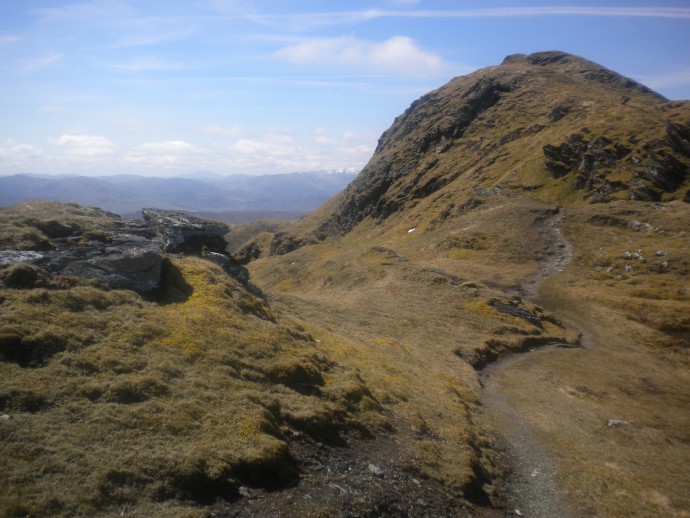 Munro Top Number Three is Beinn nan Eachan, Horse Mountain. Definitely no cuddies here, but it does turn out to be another fine rocky peak and another excellent viewpoint. There was a particularly fine view down to Killin at the head of Loch Tay: 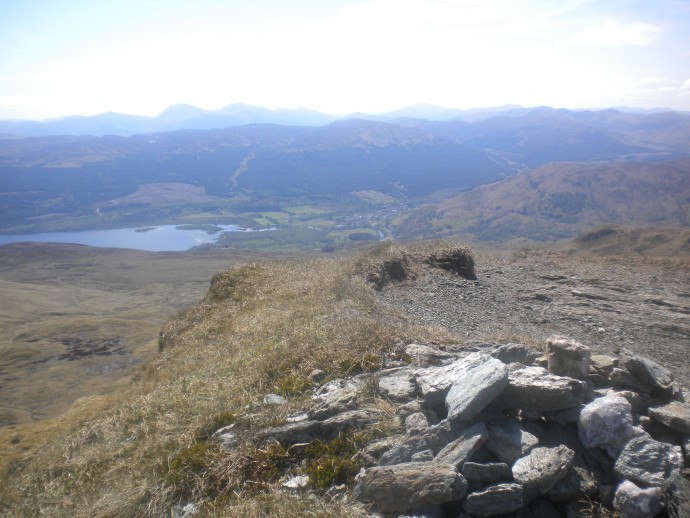 . The next section, to the final Munro Top of the day, Creag na Cailliche (Crag of the Old Woman or Crag of the Witch, depending on which translation you favour), is also extremely scenic in a grassy, Sound of Music sort of way. At first, the Crag of the Witch doesn’t really look that spooky. 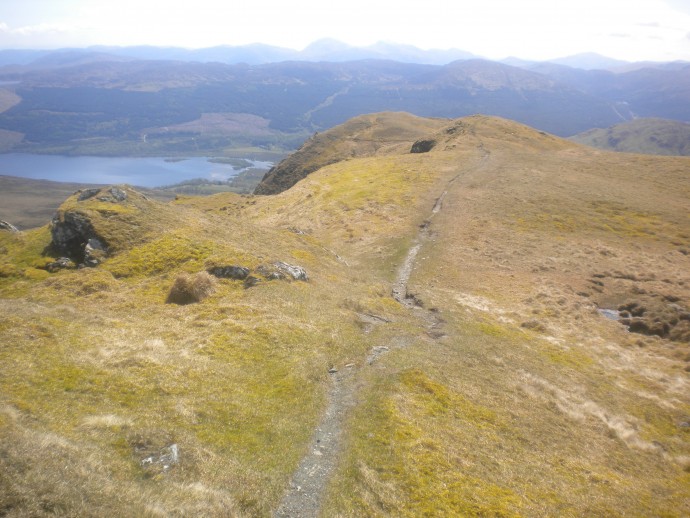 But wait a bit, let’s take a closer look at that wee bit of path in the distance: 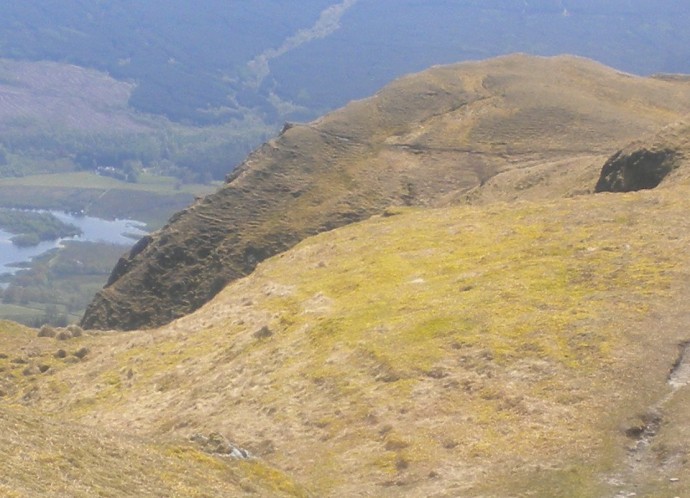 Um, that looks a bit of a steep drop to the left ... and indeed it is. This last section of the ridge, the optional continuation south of the summit of Creag na Cailliche, merits a “Caution” in bold print in Ralph Storer’s “Ultimate Guide to the Munros”. As Ralph’s book warns, the path “unreasonably” takes a huge dive to the left above a big cliff, “presumably to give sheep a thrill” as he wryly comments, although I suspect that the real reason is to avoid some minor re-ascent over a southern sub-top of the Cailliche. The “Ultimate Guide” therefore advises giving this a bodyswerve and sticking to the crest of the ridge. I thought I’d wait and see.
The summit of Creag na Cailliche came soon enough – another excellent viewpoint, and the weather was really good now.
There was virtually no wind, and it was dry underfoot, so I decided to get my ovine thrills after all (careful how I word that; no actual sheep were harmed or otherwise interfered with... 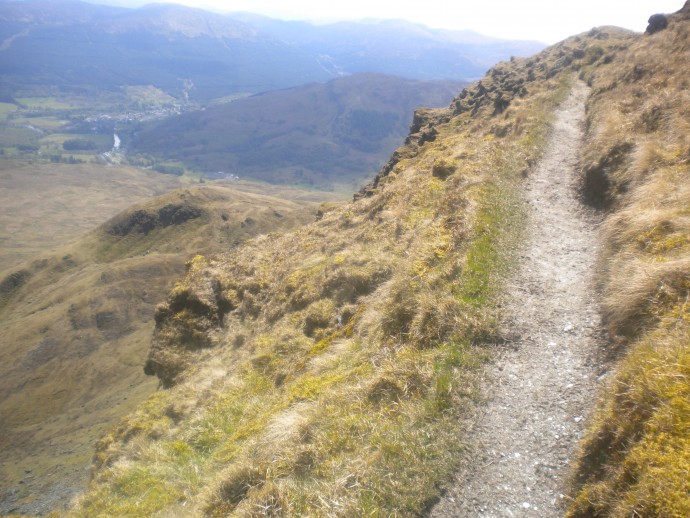 To make it even more “fun”, the path is somewhat eroded just at the biggest drop, and I can imagine that it might be relatively easy to slip fatally. I definitely wouldn’t recommend this on a windy day or if it were wet underfoot. Ralph is probably right, as usual.
After this final flourish, this Duracell Bunny of a ridge walk finally gives up the ghost, and it is time to descend, first a bit to the right (SW) to avoid those big crags to the east of the Cailliche, and then cutting down east once past the crags, to eventually reach a weir at a stream. 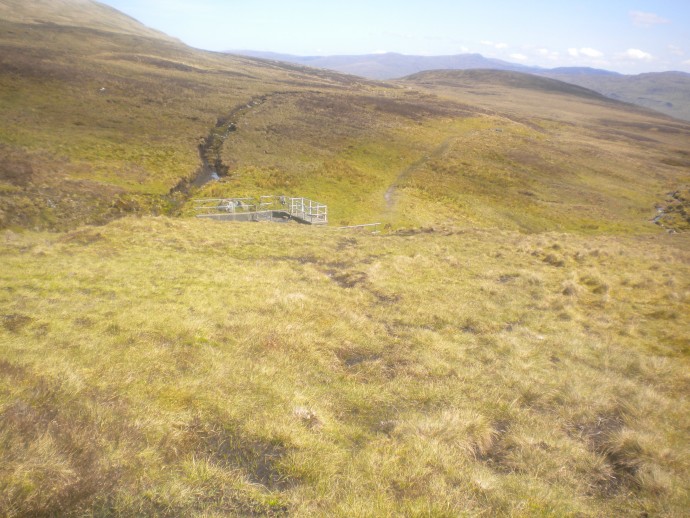 From here, the southern of two Landrover tracks is picked up to head back east towards the Lochan na Lairige road and the parking area. (There is another Landrover track to the north that runs towards the Eachan / Cailliche bealach, but this avoids that last wee section of ridge – which some might see as an advantage

. The two tracks eventually converge anyway.) The long walk back east is something of a plod, but at least there were excellent views to compensate. Here is what lies beneath the Sheep-Thriller: If I’d known that, I wouldn’t have been so cocky.
A bit further along, I saw a hang-glider: presumably he or she had just jumped off from one of the summits (maybe Meall Garbh??). Impressive, anyway. 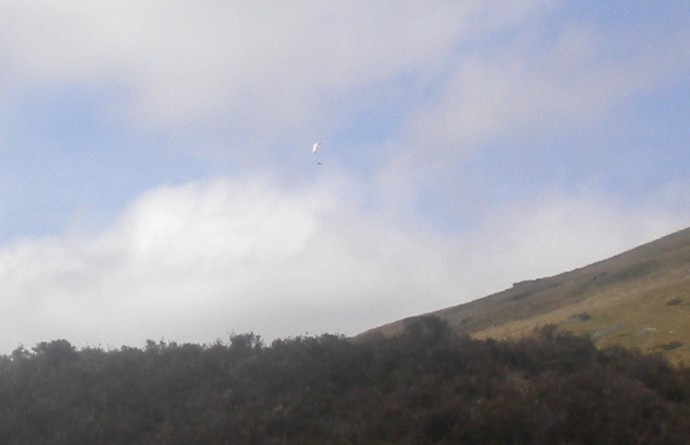 Despite strangely containing only the one Munro, the Tarmachan ridge definitely lived up to its fine reputation. A Grand Day Oot, I would say.

Looking forward to doing this.

Thanks! I'd been looking forward to it for a while, and it didn't disappoint