This was our last walk on Mull before our descent back into the Lowlands. The weather, which was a little overcast in the morning when we started (10am-ish), cleared over the course of the morning and into the afternoon. Visibility was excellent all day. We parked about 100 metres from the abandoned house at which the walk starts. Still no style in place, so a quick jump over the fence was required and the walk commenced. Mummy MacT was the group leader for the ascent and 3 year old MacT Og was the leader for the descent. The track, which is quite banked to begin with, soon levels out onto less inclined ground. The level ground, however, is still boggy in places and all of MacT Og's jumping skills were required to escape the dreaded squelchy feet. Mummy MacT thought that the direct route to the top was too steep and rocky for MacT Og and suggested that we take the more gradual ascent to the east of the hill. MacT Og was not impressed and a mutiny ensued. MacT Og ran up the face and began mounting the rocks on the steepest part of the hill. From then on MacT Og refused to walk on anything which resembled a dirt track and only walked on the rocks. The closer to the top we got, the more Ben More came into view and the other hills to the north and islands to the west and north west (to the side of, and beyond Ardnamurchan). 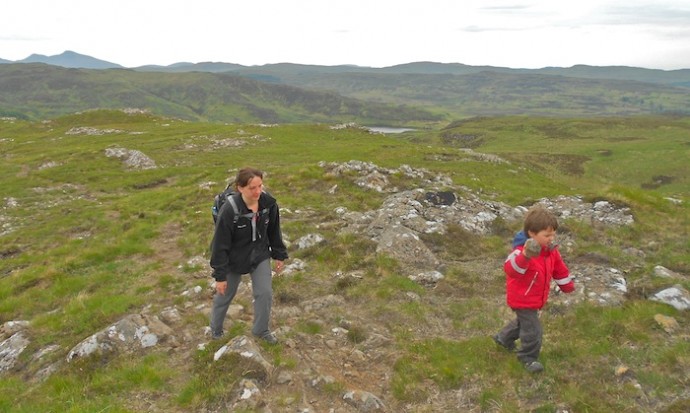 Closer to the top

Once at the top, the beautifully situated lochan provided a great prospect and a gentle breeze to cool us down and Mummy and Og sat down for a wee rest before the rest of the walk Views back along to Ben More

By this time the sun was starting to really break through the clouds and the visibility levels were pretty good. We got some great views down to Tobermory, Morven and beyond to the North East. MacT Og pulled out Finn MacMissle and Francesco Bernulli around this time and demanded that their participation in the walk be marked with a photo... We then walked round the crater's edge to the North West peak (looking onto ArdMore and Glengorm) where we pitched our picnic blanket and had some lovely sandwiches from the Tobermory Bakery (great week shop - Apple Strudel yum yum). Lochan from the North West peak

After lunch, we completed the circuit of the crater and headed down onto the water for a wee paddle before our descent. Mummy and Og on the Lochan

We returned to the old house via the breach in the craters south east ridge, which leads you down the eastern slopes(a bit bumpy and rocky here, but an enjoyable wee trek nonetheless) Looks like a lovely day out, nice to see the wee fella enjoying the hills too.

GillC wrote:Looks like a lovely day out, nice to see the wee fella enjoying the hills too.

Thanks, he loved it. I am glad to say that I think that he's caught the bug.

Lovely photos
I climbed this lovely wee hill this weekend and Ferdy, my little teddy bear mascot, demanded his photo be taken on both summit cairns .